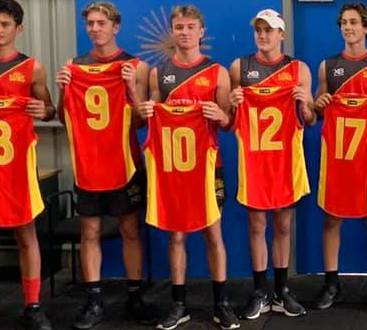 AS the postponement of all seasons commenced over the last few weeks, we head back to the pre-season where we sat down with a number of athletes across the country. In a special Question and Answer (Q&A) feature, Draft Central‘s Peter Williams chatted with Gold Coast SUNS Academy prospect Max Pescud at the Queensland pre-season fitness testing day hosted by Rookie Me. As we delve into the Queensland-based talent, you’ll get to know everything you need to know about the brightest academy talents.

The lightly-framed outside mover impressed as a bottom-ager across four NAB League outings last year for the SUNS Academy, as they went on to finish best of all the Northern Academies. Pescud was also an influential figure in Queensland’s Under 17 Futures side, making the most of his opportunities roaming forward from the wing with two goals from 16 disposals against Vic Metro. The Surfers Paradise product is now looking to bulk up in his top-age season and enter it “twice as good” as he did last year, with the ultimate goal of being drafted in mind.

PW: How’ve you found today with the testing?

MP: “Today’s been good. I haven’t been testing but it’s good to see all the boys and where the standards are at now. “There’s some good scores going around, it’s good to see the competition and what we’re going up against.”

From your perspective, has your pre-season been interrupted through injury?

“I’ve only been injured this week actually, so pretty unlucky I don’t get to test. But pre-season’s been good, it’s been hard at the SUNS. We’ve all been working very hard because this year’s fixture has been hard for us. “We want to come in and smash the Swans (Academy) and go through the season like we did last year, coming first.”

So you won’t be out for too long?

“Not too long, I’ll be back on Thursday.”

Just enough to miss the testing?

Last season, how’d you find it playing with the Academy?

“It was amazing, very eye-opening. Just playing all those games with the older boys, I enjoyed it so much. “Coming first, the equality and how they brought me in was just really good.”

What kind of things have you been improving on in the off-season?

“I’ve been just trying to gain weight, trying to get my endurance up, and just come back twice as good as I did last year. “Just to develop my body and get (my) weight better for this year.”

“Just hitting targets and my use of the ball. “Hitting the first option, and my vision – bringing the team more into the game and becoming more of a team player and leader.”

What do you see as your strengths on the field?

“My speed and my in-air ability – like taking marks – and running over time, just long distance and to constantly keep running until I’m down.”

So you’d probably be pretty good at the yo-yo test?

What are your goals for this year?

“This year obviously I’m trying to look to push into the Allies squad and hopefully if I can, to get as close as I can to becoming an AFL player at the end of the year.”