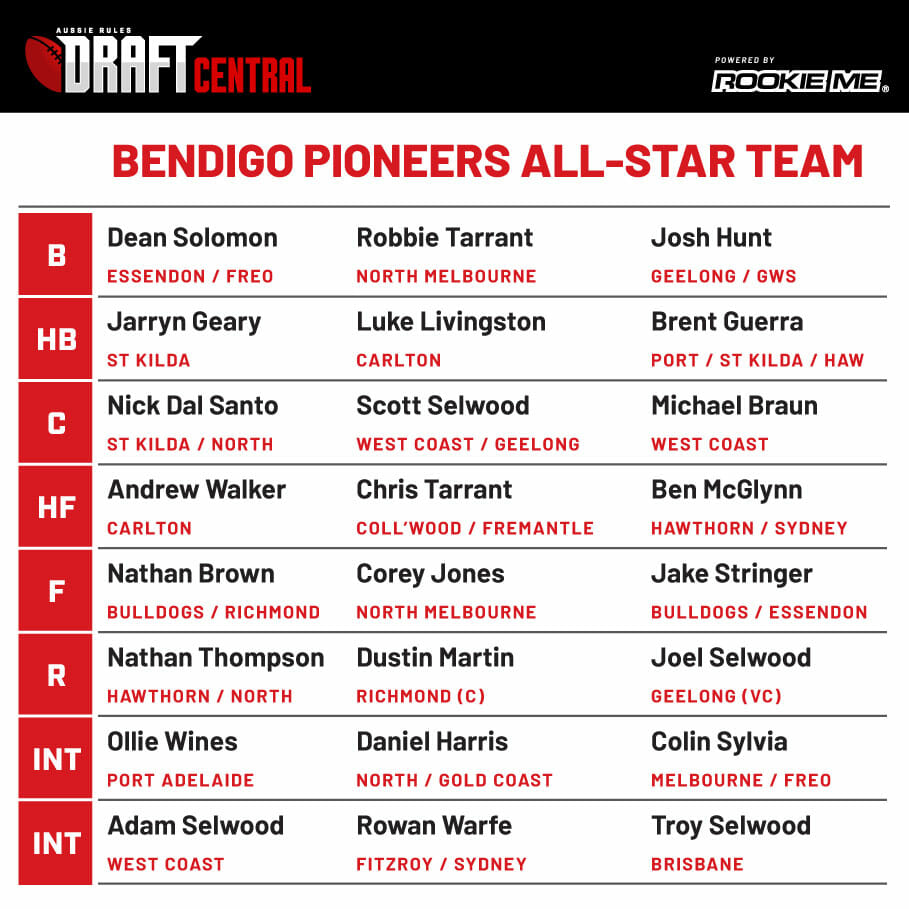 BENDIGO Pioneers have had some serious top-end quality players to come through the program, and in the first of a new All-Star Series, we name a best 24 from each of the major regions. Already you have had the chance to vote on the Pioneers’ best ever player to come out of the region with Richmond star Dustin Martin earning a deserved nod and gaining the captaincy with Joel Selwood second and winning the vice-captaincy. All of our All-Star teams will go into a vote of their own once the teams are completed to battle it out and see which region has the best AFL stars.

Not blessed with a plethora of talls over the decades, Carlton’s Luke Livingston (46 games) earns a spot at centre half-back as the least capped player in the side. Troy Selwood (75 games) is the other player to record under 100 games but make the team, and fittingly he joins his brothers, Joel, Scott and Adam in making up a sixth of the team.

As already mentioned, Livingston stands at centre-half back to team up with North Melbourne best and fairest winner, Robbie Tarrant as the key planks in the back 50. Alongside them are some underrated players who would not mind a scrap. The first thought that comes to mind when you see Dean Solomon, Josh Hunt, Jarryn Geary and Brent Guerra as the other defenders, is that you know they will keep most opposition forward lines honest and irritate them to no end. Solomon and Hunt in particular will niggle their opposition and provide some super boots out of the defensive 50. Rowan Warfe on the bench is an option to replace one of those players as depth too.

This is where the team shines. A combination of Martin and Joel Selwood onball means they will win a truckload of contested ball and through sheer power get it forward. The pair has nine All-Australians, five best and fairests, a Brownlow, a Rising Star Award and five premierships between them. Joining them in the midfield is 300-gamer Nick Dal Santo who is the other clear standout when it comes to top players of the modern era. With Scott Selwood and Michael Braun also in the side, it is fair to say the majority are hardened midfielders who will not back down from a challenge. That continues on the bench with Ollie Wines, Daniel Harris and the other two Selwoods, it is clear the Pioneers seem to have an abundance of fierce midfielders.

We are not entirely sure how this forward line would work, but it has the potential to be exciting. Imagine Andrew Walker and Chris Tarrant patrolling the airways, and Nathan Brown and Jake Stringer fighting over the ground balls and leads. Ben McGlynn provides the defensive pressure that, quite frankly the other smalls do not offer, while Corey Jones is the logical key forward to join Tarrant in attack. Nathan Thompson would usually be chosen as the starting forward, but his stint as an undersized ruck means he can play in the role that realistically has no one else there. On the bench, the late Colin Sylvia could play a role in attack or float onto a wing and provide some class. There might be a Mark or Goal of the Year in this forward line, or it could be a complete disaster. Either way it would be worth watching.

From the earlier years, Mark Alvey (Western Bulldogs/Essendon, 59 games) was considered, while Adelaide and Carlton mid/forward Sam Kerridge (69 games) has the most matches of non-current players not in the side for the Pioneers. Of the modern crop, the likes of Paddy Dow (39 games), Lochie O’Brien (35) and Brent Daniels (33) have already started promising careers and could well force their way into the side in coming years. For those who have a particular interest in the TAC Cup / NAB League system, one might raise Clayton Oliver as a potential player for this team. While he did play three games, he moved for school purposes and joined Murray Bushrangers where he ultimately went from nowhere on the radar to a top five pick. So in future, the team that the player was drafted out of in their top-age year is the team they are eligible for.