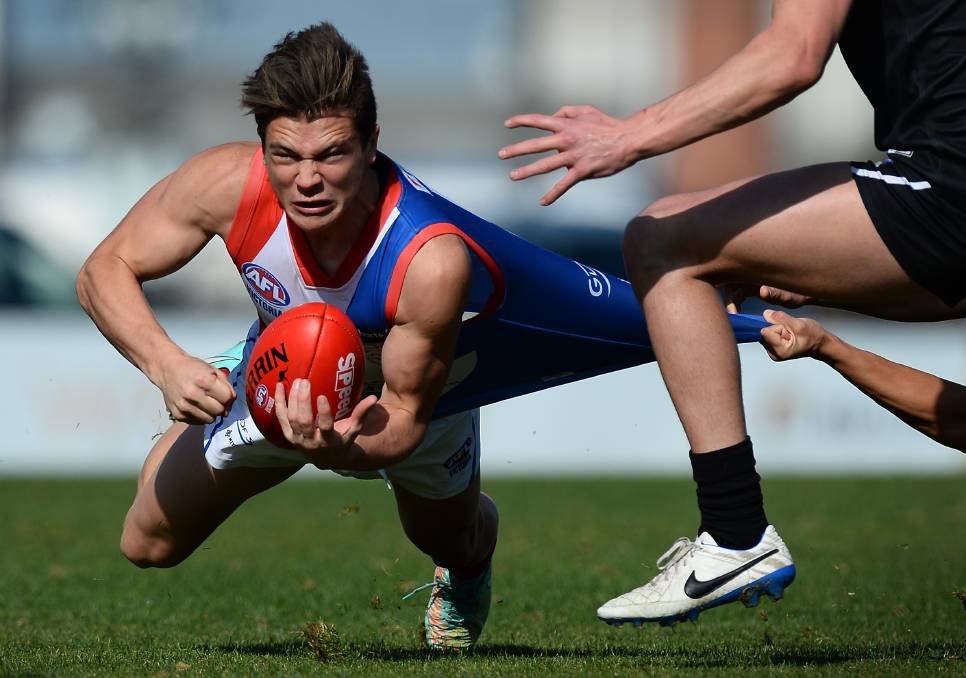 IF you are missing footy like we are, then let us somewhat salvage that with a look back in a new series of Classic Contests. In today’s contest we look at one of the would-have-been Round 5 clashes in the NAB League this year between the Gippsland Power and Greater Western Victoria (GWV) Rebels. In this edition, we wind back the clock to 2015 when the sides produced an epic clash and the Rebels were still known as North Ballarat Rebels.

Earlier in the season, the Rebels had got the better of the Power, coming from behind in Round 8 at Eureka Stadium to win by 13 points. They had trailed by 22 points at half-time, but a nine goals to three second half had sent the Rebels fans home happy. It would be eerily similar in the second encounter between the two sides, this time in Morwell where the home fans would be keen to repay the favour. After 15 rounds, the Rebels were sitting pretty on the top of the table with that Gippsland loss being only one of two for the season so far. The Power had been a mid-table team with six wins, seven losses and a draw from 14 games and were percentage ahead of the eighth-placed Calder Cannons.

The game started off with the favourites getting the jump on the home team, piling on five goals to two and making the most of their chances in the opening quarter. The Rebels led by 17 points at quarter time, and doubled up on that dose in the second term with another five goals to two quarters. Heading into the rooms at half-time, North Ballarat led 10.6 (66) to 4.5 (29), a 37-point margin in what was a one-sided contest to date. Few would have predicted what happened on the other side of the break, as the Power piled on five goals to zero – and it could have been even more with seven behinds – to slash the deficit to a remarkable one-point at the final break. The shell-shocked Rebels managed to get some momentum back with a couple of goals in the final term, but the Power continued their strong forward half dominance with 3.9 to win by 13 points and arguably should have been more given the final 12.21 (93) score. It was a stunning turnaround from a team that looked dead and buried at half-time, but found a way to win.

Of the future AFL draftees on the day, Ben Ainsworth was named among the best for the winners, recording 16 disposals, seven marks (one contested), one tackle and 1.3, while Tom Papley was also named in the best for his 2.4 from 16 touches, seven marks and a tackle. The twin towers in Ben and Harry McKay did not have a huge influence on the game, combining for 14 disposals, four marks, five tackles, 10 hitouts and 2.1. Of Gippsland’s best, Josh Patullo racked up 44 hitouts to go with 17 disposals, nine marks (three contested), three tackles and a goal, while Kade Renooy helped himself to 25 disposals, four marks, three tackles and a goal. Link Robinson (three goals) and Aloysio Ferreira (two) were the other multiple goalkickers for the Power in an even team performance. In terms of the bigger ball winners, Nash Holmes had a day out with 25 disposals, five marks and four tackles, while Jackson McMahon finished the match with 26 disposals, four marks and two tackles.

Of the Rebels, they too had a number of draftees both top and bottom-agers. A young Hugh McCluggage had 16 disposals, four marks – two contested – and six tackles on the day, while Lloyd Meek had 23 hitouts but just three disposals and three tackles. Tom Williamson finished with six disposals, one marks and four tackles, while Jamaine Jones was the other future draftee, picking up four disposals, three marks and booting a goal. Of those in the best for the Rebels, Josh Webster picked up 17 disposals, three marks and four tackles, while Joseph Symons laid nine tackles to go with 15 touches, two marks and a goal. Ezekiel Frank booted a game-high three goals from six touches and two marks in a losing side. The top disposal winner was Tom Templeton who helped himself to 20 disposals and five marks on the day.

Gippsland Power went on to finish seventh, but bowed out to a full-strength Oakleigh Chargers outfit to the tune of 78 points in the elimination final. The North Ballarat Rebels would suffer the same fate in the preliminary final after finishing on top of the table, losing to the Chargers by 32 points as Oakleigh went on to win the 2015 flag against Eastern Ranges.