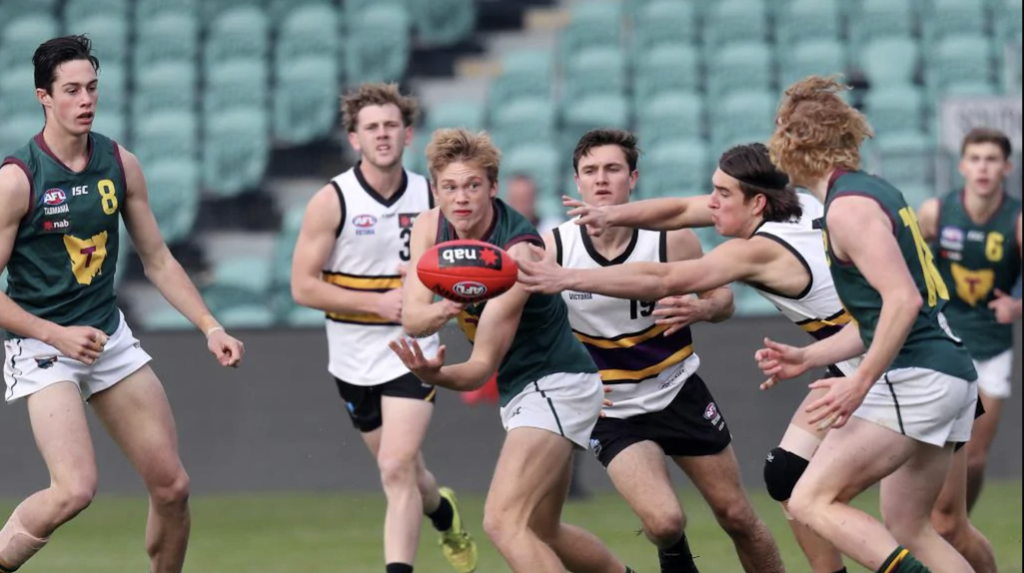 IF you are missing footy like we are, then let us somewhat salvage that with a look back in a new series of Classic Contests. In today’s contest we look at one of the would-have-been Round 5 clashes in the NAB League this year between the Tasmania Devils and Murray Bushrangers. In this edition, we wind back the clock to 2019 in what has been the only clash between the pair.

At the mid-point of the season and the 2020 AFL Under 18 National Championships underway, Murray Bushrangers crossed the Bass Strait to visit Tasmania Devils in Launceston. Coming into the match, Tasmania was sitting just outside the top eight with four wins from eight games and a healthy percentage of 106.11. In what had been a shaky start to the season for the Bushrangers, then had won just two games from eight themselves, but a win could see them jump as high as 12th from their 15th on the table. With both side missing quality players due to the championships, it would be interesting to see who could show off its depth in the early stages of winter over the long weekend.

Dylan Clarke had a goal on the board for the visitors three minutes into the contest, and Zane Barzen joined him soon after to hand Murray an early lead. Lachlan Borsboom ensured Tasmania would get a major back in response, but it would be the only one for the half, as Murray would pile on five consecutive goals over the next two quarters. Ryley Bouker snagged back-to-back majors and Dominic Bedendo kicked one after the siren for a 28-point lead at the first break. Their dominance continued in the second term, but could not quite find their range with 2.4, and the majors coming from Thomas Panuccio and Ben Kelly.

Now holding a massive 42-point advantage at the half, it was always going to be hard to stop Murray, though Will Peppin tried with his side’s major coming almost an hour after the first. Co-captain Cameron Wilson and forward Hudson Kaak both converted majors to end out the term and lead was an even more impressive 48 points at the last change. Wiht the game done and dusted, Tasmania lifted up a couple of gears, with a Barzen goal at the eight-minute mark giving Murray a game-high 53-point lead. The visitors would only score two more behinds at the Devils would boot 2.5 from that point in a case of missed opportunities. It did cut the final deficit back to 28 however, though it was Murray who would go home happy.

For the Devils, Matthew McGuinness was the standout in defence with 21 disposals, seven marks and nine rebounds, teaming up with Patrick Walker (15 touches, four marks, five tackles and five rebounds) in the back 50. Oliver Burrows-Cheng had 18 disposals, four marks, 13 tackles, four clearances and four inside 50s working through midfield, while Jackson Callow (16 disposals, three marks and five tackles) and Borsboom (16 disposals, three marks, three tackles, three inside 50s and a goal) worked hard up forward.

Murray would end up finishing ninth at the end of the season, going down to Dandenong in the Wildcard Round, while Tasmania would effectively finish 12th excluding the part-time Academy sides, where it would push fifth placed Calder Cannons in their Wildcard match but fall short and be eliminated from finals contention.