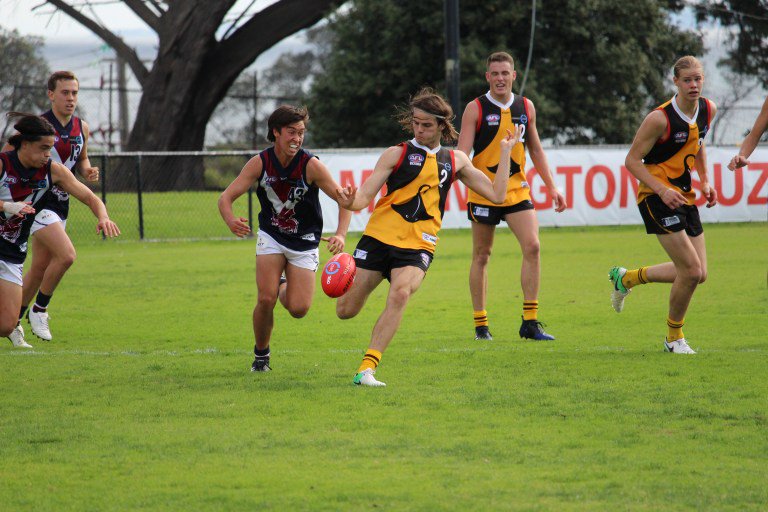 IF you are missing footy like we are, then let us somewhat salvage that with a look back in a new series of Classic Contests. In today’s contest we look at one of the would-have-been Round 5 clashes in the NAB League this year between the Dandenong Stingrays and Sandringham Dragons. In this edition, we wind back the clock to 2017 for what was a top four clash between the Country and Metro powerhouses, with plenty of future AFL draftees in action and a hotly-contested finish.

The scene was set at Trevor Barker Beach Oval in August, 2017 for a belting contest between two top four hopefuls stacked with high-end draft talent. Late-season contests often see sides return to full strength at the completion of the school football season and national carnival, and there was no shortage of future draftees among the two sides on this day. Both clubs would produce nine AFL recruits each from their respective matchday squads alone, spilling into the double digits overall across the next two drafts.

Taking the field in this match were also three first round draftees on either side in the form of Andrew Brayshaw, Bailey Smith, and Ben King for Sandringham, and Luke Davies-Uniacke, Hunter Clark, and Aiden Bonar for Dandenong.

Given the even spread of talent, neutrals, draft analysts, and recruiters alike came in anticipating a close contest to go with the showcase of elite players. But the Stingrays had other ideas as they build on a seven-point quarter time lead to move just short of five goals clear at the main break. A string of seven unanswered goals had the visitors sitting pretty at 44 points to the good and boasting an astonishing eight individual goalkickers within the first two terms. The likes of Davies-Uniacke, Clark, and Bonar had all managed to find the big sticks, with Sandringham desperately needing to arrest the momentum.

Up stepped Aaron Trusler at the end of the second stanza with two consecutive goals to keep the margin at a manageable distance, with his third at the start of the next term a catalyst for the Dragons’ storming comeback. Trusler’s three majors would mark the beginning of his side’s six-goal run, which extended to eight of the next ten majors as the three quarter time siren sounded. From 44 points down, Sandringham had even snuck ahead through Brayshaw, but it was cancelled out late-on by a much-needed goal to Jai Nanscawen for Dandenong.

With the ledger all-but even heading into the final term, a grandstand finish was on the cards. In a tense closing period of play, the sides managed a goal apiece to break the big runs of goals, with Dandenong unable to quite put the Dragons away but still notching the four points.

Trusler’s three-goal effort proved key in turning the tide despite his side being unable to complete the comeback job, with former Sydney rookie Angus Styles named the best in a losing effort for his 18 disposals and one goal at 100 per cent efficiency on the outside. Fremantle midfielder Brayshaw also had his say with 27 disposals and a goal, while Magpie Nathan Murphy and Swan Joel Amartey were also named among the best.

As far as other draftees go, Bulldog gun Smith collected 25 touches as a bottom-ager, Joel Crocker had it 24 times, Charlie Constable booted a goal from 15 touches, Hayden McLean shared ruck duties with Amartey while up forward, and King only managed three marks among nine disposals.

For Dandenong, it was a case of the cream rising to the top as Clark was named best afield for his 29 disposals and two goals, while Davies-Uniacke managed 21 and one goal, and future Saint Oscar Clavarino was also named among the best from defence. Among the other draftees, bottom-ager Bailey Williams managed 1.3 and 16 hitouts, while Bonar, Will Hamill, and Mitch Riordan all also managed to find the goals in games which provided a glimpse of their talent. Meanwhile, Lachlan Young booted three points from 12 disposals, Tom Murphy found it 14 times, and the VFL-listed Mason De Wit had a decent day out with 21 disposals and eight marks.

The Stingrays would go on to finish third after the 2017 regular season, one spot above the Dragons but could not manage the same finals success. After famously overcoming Eastern in what was a monumental come-from-behind win, Dandenong fell to Geelong in the preliminary final stage. The Falcons also proved a thorn in the side of Sandringham, going on to beat the Dragons in a thrilling decider made famous by Gryan Miers’ seven goals, and Amartey’s after-the-siren miss.