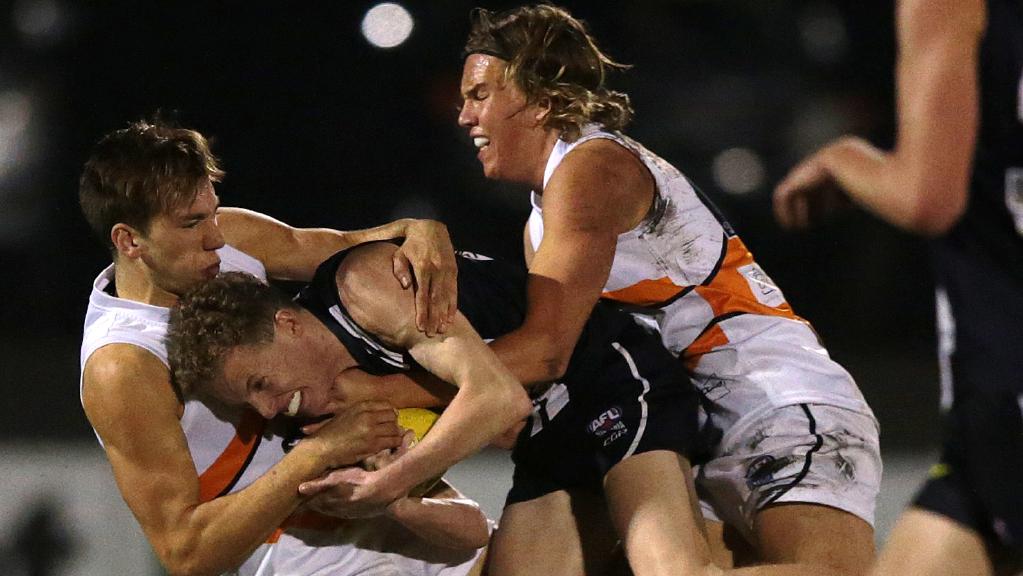 IF you are missing footy like we are, then let us somewhat salvage that with a look back in a new series of Classic Contests. In today’s contest we look at one of the would-have-been Round 5 clashes in the NAB League this year between the Calder Cannons and Geelong Falcons. In this edition, we wind back the clock to 2017 when the teams played out a contest closer than their ladder positions would suggest in a top-versus-bottom clash.

Geelong was flying come Round 8 of the 2017 TAC Cup season at 7-0 and atop the competition ladder, ready to put on a show under Friday night lights against the Calder Cannons, whose 1-6 record had them sitting last. But it did not totally pan out that way in Torquay, with the pesky Cannons outfit out to build on picking up its first win for the year in the previous round. A handful of future AFL draftees would take the field, with breakout Geelong Cats forward Gryan Miers named alongside GWS utility Connor Idun and former Gold Coast rookie, Josh Jaska for the home side. For Calder, Noah Balta was the sole 2017 draftee, playing a forward-ruck role while bottom-aged future Saint Jack Bytel also donned the Cannon. In what was the only meeting between the two teams in 2017, a belter ensued.

Despite being down on three of their eventual five draftees, the Falcons still managed to set up a three-goal buffer in the opening term with unanswered majors from Adam Garner (two) and Ethan Floyd within just under 15 minutes. But the Cannons would hit back through Mohammed Moustafa and Daniel Hanna to trail by nine points at the first break. The hint of momentum continued into the second term too, with Moustafa adding a second early on before a 15-minute stalemate. As Calder closed to within a point, Miers stepped up to boot his first goal and was followed swiftly by Cooper Cartledge to provide a bit of breathing space. But a red time goal to the visitors kept them within striking distance heading into half time.

A boilover looked on the cards come the third term as Balta got on the board after two minutes following a behind from Cassidy Parish up the other end, beginning a chain of two more unanswered goals to Calder. Ben Thomas stood up to somewhat arrest the skid, with Geelong now a goal behind as things began to heat up. The lead would change hands five times in a see-sawing final term, as Thomas’s second goal put the Falcons back in front early in the quarter. The Falcons had chances but could not quite break away, edging 10 points to the good before Jesse Firebrace and Mitch Podhajski stole the lead back for Calder. After Lachlan Noble again snuck Geelong ahead, two more Cannons goals had them seven points in front with under five minutes left to play. But the lead went as quickly as it came as Geelong booted two decisive goals within as many minutes, while Matthew Borg spurned a tough chance late-on as the hosts scraped over the line.

Harry Benson, whose goal proved the match-winner was named best afield for the winners on the back of a monster game, while Parish and Noble also impressed. Jaska was named in the best half-dozen as well alongside Idun, while Miers’ 23 disposals and 2.3 were not enough to earn him the same honours. For Calder, Coburg-listed Brad Bernacki was adjudged his side’s best in front of Balta, while Lions teammate Aidan Tilley also featured alongside Bytel, who managed 32 touches as a bottom-ager.

The overall Geelong 2017 squad would go on to produce 11 draftees, split five and six over the next two drafts and including the likes of James Worpel and Sam Walsh respectively. Miers went on to finish as the competition’s leading goalkicker after booting seven in the Falcons’ famous grand final win over Sandringham in the same year, breaking out for Geelong at senior level in 2020. Calder built well on its 2017 effort with four draftees coming in 2018 including Bytel, Curtis Taylor, and Rhylee West. The Cannons would miss finals despite twice beating the eighth-placed Northern Knights, but won five of their last 10 games for the year.