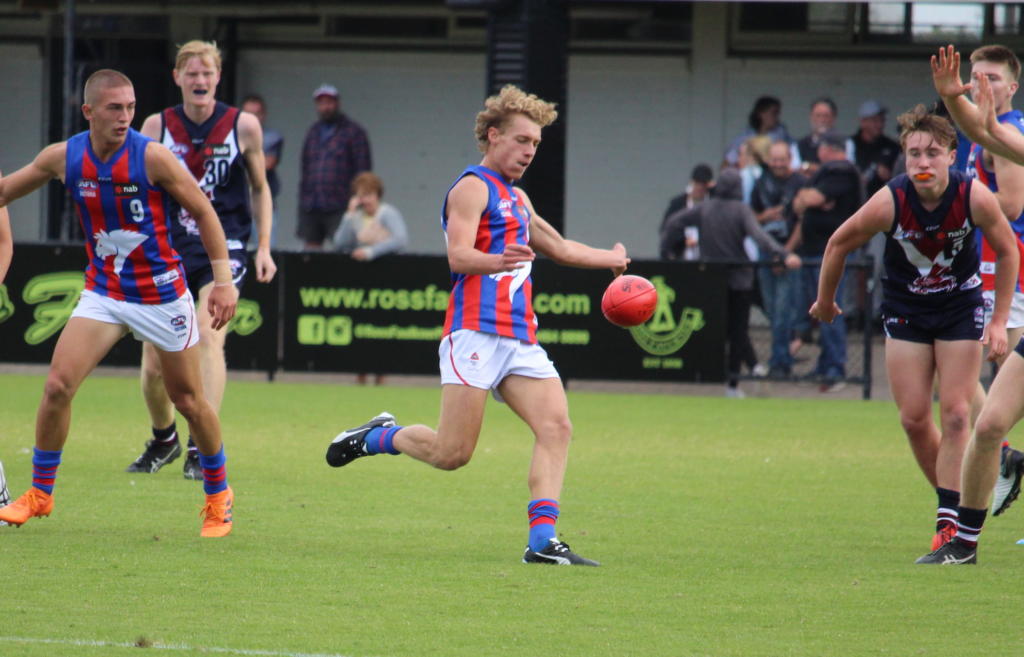 AS the postponement of all seasons commenced over the last few weeks, we head back to the pre-season a month earlier where we sat down with a number of athletes across the country. In a special Question and Answer (Q&A) feature, Draft Central‘s Michael Alvaro chatted with Oakleigh Chargers’ Finlay Macrae at the NAB League Fitness Testing Day hosted by Rookie Me.

The brother of Western Bulldogs star, Jackson, Finlay has paved an equally-impressive junior path of his own thus far having featured in last year’s Vic Metro squad as a bottom-ager. While he may not have gotten on the park for the Big V’s Under 18 outfit, Macrae impressed across his seven outings at NAB League level for Oakleigh, including an influential finals campaign after school football commitments saw him represent Xavier College.

Having been utilised across half-forward given the strength of Oakleigh’s midfield in 2019, the 184cm Charger is keen to build his midfield minutes this season and has all the poise, smarts, and class to do so. A capable user of the ball, Macrae showcased as much in last year’s Under-17 All Stars fixture on AFL Grand Final Day, while gaining more tricks of the trade in a week-long pre-season stint at the Bulldogs. With notable experience under his belt and some outstanding talent surrounding him, Macrae looks primed for a big year – however it may pan out.

MA: How’s the testing been so far?

FM: “It’s been pretty good. Started off with the agility and the vertical and all that, got the yo-yo to go.”

Were you able to showcase some of your best traits in those or is the yo-yo the one you’re after?

“Yeah I’m probably more of an endurance player, so hopefully the yo-yo I can go alright in.”

You stood out in a pretty stacked Oakleigh side last year, how’s that helped you set up for your top-age season?

“Learning a lot from Rowelly (Matt Rowell) and Ando (Noah Anderson) is big. “Especially not playing mid last year but hoping to get a bit more mid time this year. “Taking little things away from them, training habits and things like that has been really good. A great experience.”

You’re in a rare position in that you’re not only learning off guys like Rowell and Anderson first-hand, but you’ve also got a brother (Jackson) in the AFL system. How’s that been for your development?

“Yeah it’s been pretty good. I suppose spending the week in December (at the Western Bulldogs) was also really cool. “Joining in with some of their midfield craft sessions, that was really good and a great experience as well.”

Did you beat out your brother at a few of the stoppages?

“Nah I didn’t play on him unfortunately. “But yeah, it was a good week.”

Obviously that goes with being in the Vic Metro Hub as well, who are some of the guys that you’re looking forward to playing alongside?

“For Metro I suppose a couple of blokes that played last year. Nik Cox, Will Phillips, and Connor Downie – those sort of blokes, they’ve been really good. “And then Sam Tucker, a good mate of mine, he’ll also be in there which I’m excited about.”

And you’re at Xavier College… who’re some of the guys that you’re looking forward to playing alongside there?

“Josh Sinn, a bottom-ager this year and Dante Visentini – they’re also good. And Will Hart, he’s another one. “So a pretty good team this year hopefully.”

Are you really set on locking down that midfield role and being a leader through the engine room?

“Yeah it’d be a good experience. “I suppose (it was) a pretty stacked team last year and I didn’t quite get an opportunity but playing forward was really good for me, I enjoyed it and this year it’d be nice to play a little bit of mid.”

Are there any other goals personally that you’re looking to tick off?

“Yeah I suppose making the Vic Metro team and the Australian team are probably the two standouts… I’m really pushing forward toward them and trying to get in.”