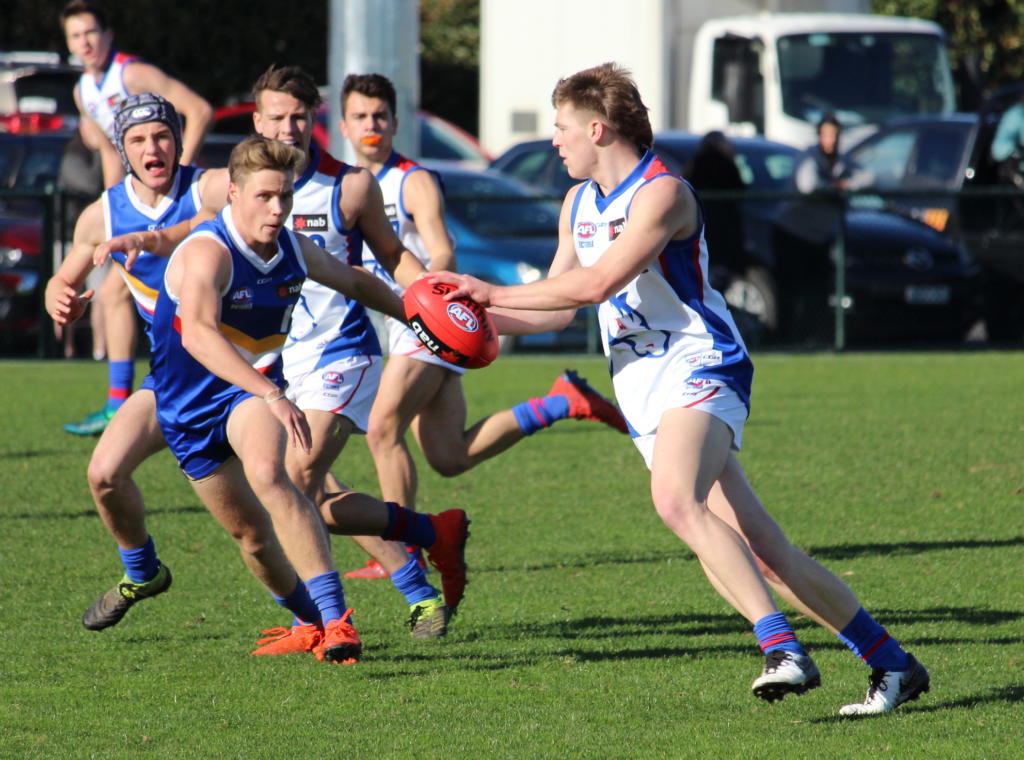 IF you are missing footy like we are, then let us somewhat salvage that with a look back in a new series of Classic Contests. In today’s contest we look at one of the would-have-been Round 3 clashes in the NAB League this year between the Eastern Ranges and Oakleigh Chargers. In this edition, we wind back the clock to 2019 for a top four clash which produced plenty of highlights across a number of momentum shifts, with the Chargers getting on top at the ideal time.

Coming into the Round 14 clash, Eastern Ranges sat top of the table, two wins and percentage clear of the next three sides, Gippsland Power, Oakleigh Chargers and Western Jets. The Chargers were getting players back after the Under 18 Championships, and the game at Box Hill City Oval shaped as an absolute blockbuster between two premiership contenders. It would also end up being a grand final preview. With Gippsland winning the earlier game against Tasmania Devils at the ground, the Power now held a strong advantage in second and moved to within four points of the Ranges inside the top two. It would be important for Oakleigh to win considering its run home and the importance of securing a top four spot.

Eastern started the better of the two sides, booting four goals to zero in the opening term and holding the Chargers goalless until the fifth minute of the second quarter. By the time the Ranges’ leading goalkicker Jordan Jaworski put through his second 10 minutes into the quarter, the home side led by 29 points with six goals to one on the board. The momentum began to soon swing with Oakleigh remarkably booting the last five goals of the half, including a couple to Cooper Sharman, and then one right before the half-time break to Dylan Williams who put his team in front for the first time.

The teams traded blows in the second half, with Beau Tennant opening proceedings five minutes into the term, before Sam Woodward extended the lead out to seven a couple of minutes later. This was countered by Oakleigh’s Xander Tassell to cut the deficit to two midway through the term, but once again Eastern had the answer, this time through Tom Weir. The home team led by eight points, but Thomas Graham who was finding plenty of the ball through the ruck, kicked a crucial one late in proceedings to cut the deficit to just three points again. He missed a chance to put his side in front a moment later, and then a desperate rushed behind had the three quarter time siren sounding with Eastern just a solitary point in front.

Sharman stepped up to boot a third goal just three minutes into the term, before Tennant was quickly on the board once again, slotting his side’s first major to take back the lead for Eastern. A fourth to Sharman and one to Giorgio Varagiannis opened up the largest margin of the game for the Chargers – 10 points – but goal sneak Jaworski refused to let the game slip away and converted the Ranges’ 11th major with 10 minutes to go. Billy McCormack missed a chance with the time ticking down and the deficit now three points, before future Port forward Williams again stepped up when his side needed him most, converting a crucial goal with a few minutes left to seal the deal and Oakleigh was able to hold on and win by eight points, 12.11 (83) to 11.9 (75).

There was a host of talent running around that day with Trent Bianco leading all-comers thanks to a whopping 34 disposals, eight marks, four tackles, six inside 50s and 10 rebounds, while Jeromy Lucas (27 disposals, three marks and four tackles) and Kaden Schreiber (20 disposals, four marks and two inside 50s) also found plenty of the ball. From the bottom-age contingent, Lochlan Jenkins and Will Phillips both had 22 disposals and combined for 13 clearances and seven inside 50s. Sharman’s four goals from 18 touches, six marks and four inside 50s were crucial in the win, while Williams finished with two goals from eight disposals, three marks and three inside 50s. Graham (17 disposals, six marks, 14 hitouts and one goal) and Bailey Laurie (14 disposals, six rebounds) were others who impressed in the win.

As history would show, these sides would go on to make the 2019 NAB League Grand Final, with Oakleigh Chargers getting up and winning the premiership in terrific style.