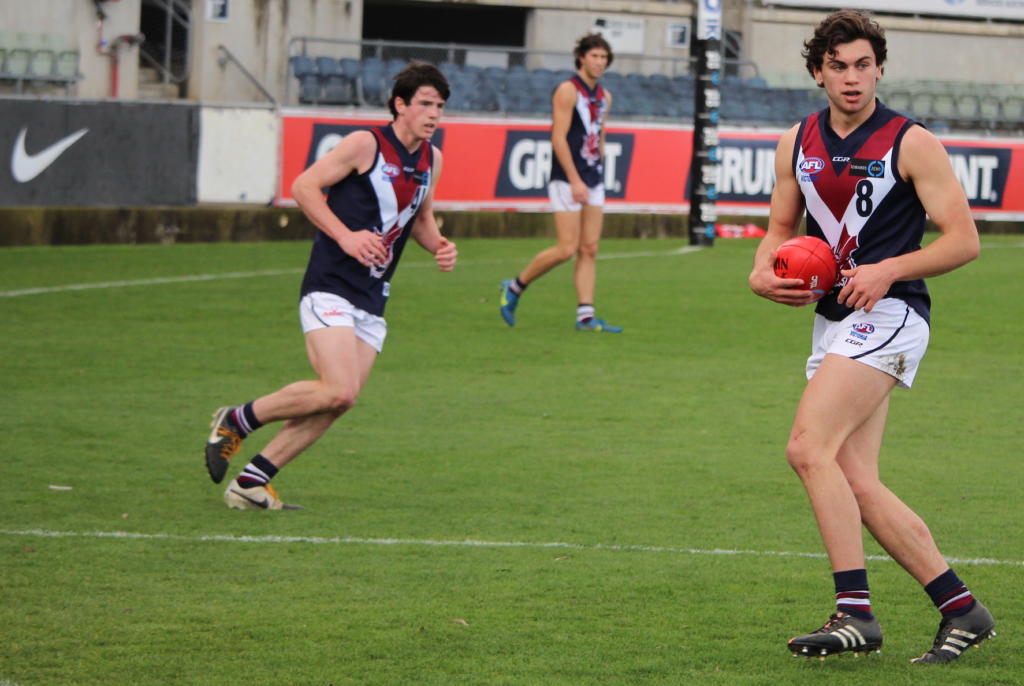 IF you are missing footy like we are, then let us somewhat salvage that with a look back in a new series of Classic Contests. In today’s contest we look at one of the would-have-been Round 3 clashes in the NAB League this year between Sandringham Dragons and Calder Cannons. In this edition, we wind back the clock to 2016 when a fast-finishing Calder almost got over the top of a strong-starting Sandringham.

A Sunday evening clash to round out the weekend of TAC Cup contests saw a Sandringham Dragons outfit – fresh off a 15-goal smashing of Northern Knights – travelling up the Hume Highway to face Calder Cannons at RAMS Arena. The Cannons had gone down to Eastern Ranges by 41 points in the opening round and had a tough fortnight to start the season. The home team had future AFL draftees, Ben Ronke, Mitch Lewis and Zach Guthrie in the side, while the Dragons side had the likes of Andy McGrath, Tim Taranto, Ollie Florent, Corey Lyons, Cam Polson, Hayden McLean and Angus Styles who all made it onto lists.

The game itself started as many had expected going into the game with the top of the table Dragons booting five goals to two in the opening term, and then adding the only two goals of the second quarter to their name. Sandringham led by an impressive 33-points at half-time, and despite the comfortable lead, still managed to build on it in the second half. The visiting side booted three goals to two and were 41 points up at the last change, with the result all but done and dusted. But little did they know, the Cannons were not going to give up without a fight and they piled on the last five goals of the game in that final term to come agonisingly close, but fall 12 points short of victory.

Karl Brown did his best up forward booting 3.3 in what could have been an even bigger performance in front of goal, also picking up 16 disposals, five marks (two contested) and laying three tackles). Jackson McDonald was voted best-on for the Cannons in the loss, recording 16 disposals, three marks (one contested) and six tackles, while Brad Bernacki helped himself to a goal from seven disposals and two tackles after working hard for his side through the midfield. Ronke booted a goal from 13 disposals and laid a whopping 10 tackles, while Guthrie had 11 disposals and four marks out of defence. Lewis was another strong set of hands inside 50m picking up 12 disposals, six marks (two contested), and a goal, while Tyson Lever had 20 touches, three marks and seven tackles also in defence.

For the Dragons, Lyons had the ball on a string with 27 disposals, three marks and 1.2 for his side, named second best behind Max Williams (12 disposals, four marks). Florent (21 disposals, four marks five tackles and a goal) was also named in the bests alongside Polson (18 disposals, five marks and three tackles) and Alfie Jarnestrom (15 disposals, three marks, four tackles and 2.1). McGrath had a lazy 32 touches, eight marks and five tackles, while Taranto had 28 disposals, six marks (one contested) and eight tackles as both were their typical influential selves. Up forward, McLean had an inaccurate day despite getting involved, booting two behinds from 15 disposals and seven marks (one contested). The Dragons had nine individual goalkickers on the day in what was a real team effort to hold on under tough circumstances.

As history would go on to show, Sandringham Dragons would win the 2016 premiership led by their multitude of stars, while Calder Cannons would go down to a full-strength Oakleigh Chargers outfit in the elimination final.