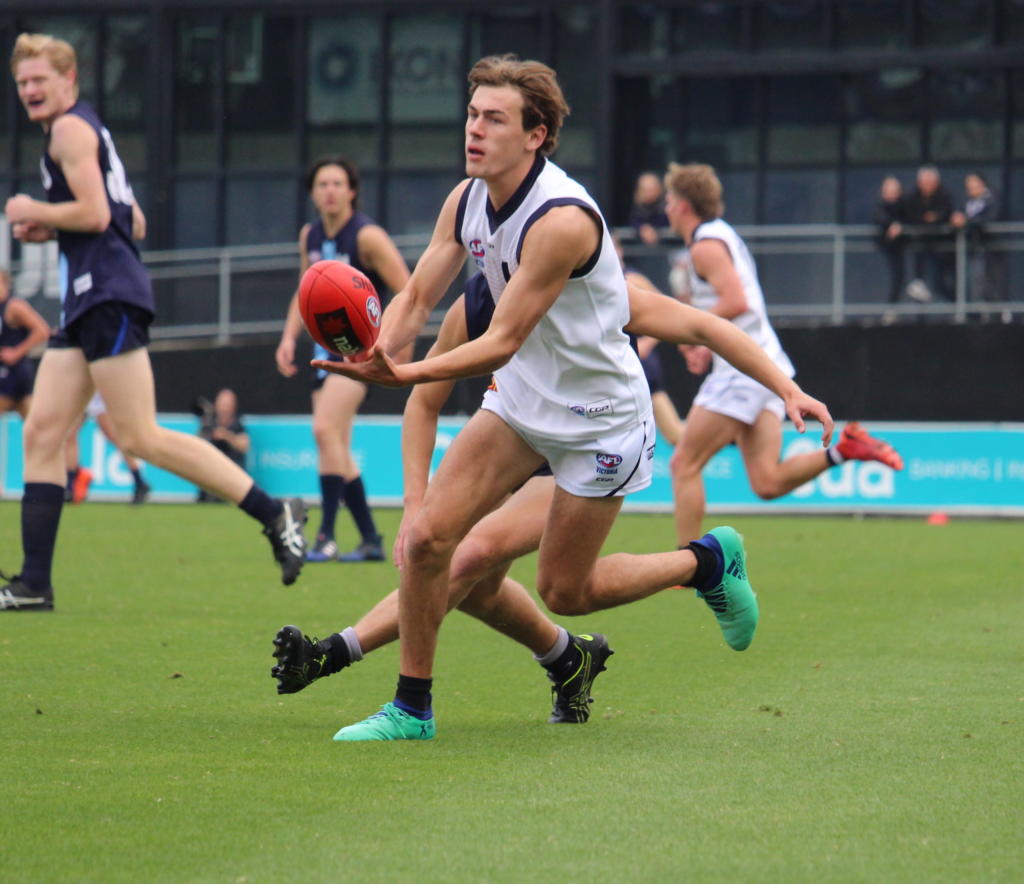 AFTER injury curtailed his year, Greater Western Victoria (GWV) Rebels’ Isaac Wareham is hoping to make the most of a second chance after being picked as one of the overagers in the Rebels’ squad. There is still much unknown about the season or drafts, but Wareham is just taking each moment as it comes.

Born on Christmas Eve, had Wareham been born a week later, he would have had his top-age year in 2020. Nonetheless, the talented midfielder was top-age last year, and copped an injury at the worst possible time later in the season after a promising first half of the season and representing Vic Country at the AFL Under 18 Championships. Speaking to Draft Central at the NAB League Fitness Testing Day hosted by Rookie Me, Wareham said he was looking forward to having a full season after overcoming injury in his top-age year.

“I’ve been with the Geelong VFL at the moment as an overager and they’ve done heaps for me, which has kind of helped me out me through the offseason and hopefully that can get me playing some good footy this year,” he said.

The decision to come back as a 19-year-old talent – even though if Wareham was to be drafted at the end of the year he would still be 18 on draft day – comes down to the individual, his club and interest from AFL recruiters. With an invitation to the State Draft Combine last year, Wareham had his suitors and GWV Rebels Talent Manager Phil Partington believes if it had not been for injury, the slick midfielder would be on an AFL list now.

“Isaac, unfortunately we probably wouldn’t be talking about him now if he played the last six games of the year without injury, he missed the last half of the year after the national championships,” Partington said. “He’s born on 24/12 so he’s a very young boy still and only a week from being a NAB League player officially as an 18-year-old this year.”

It was Partington’s support that helped Wareham make the decision to return to the Ballarat-based club for another year, while being listed on Geelong’s VFL list.

“I think any chance you get at playing high level footy like NAB League, you’re going to take it,” Wareham said. “Parto’s (Partington) been rooting for me for the whole time. “He urged me to go for the 19-year-old (year) and I got it and yeah like I said before, Geelong have been really good with it and have allowed me to do both which is good.”

Growing up in the talent fertile region of the Hampden League playing for Terang Mortlake, Wareham said the style of play might have changed going through the elite pathway, but the simple messages from coaches was the same.

“Yeah obviously it’s a little bit different to other areas,” he said. “It’s more country footy so it’s maybe takes a little to get used to this high skill, NAB League. “But I think coaches growing up always gave us the same tips and same pointers that the coaches nowadays are so I think they do really well.”

Not everyone gets a chance at pulling on the ‘Big V’, but that is exactly what Wareham did last season, and the lightly built midfielder said it was enjoyable throughout and despite the end result, was something he would never forget.

“I think that was one of the funnest times of football I’ve had,” Wareham said. “I think the team atmosphere we had and the culture we built was pretty special. “It was just so fun to play in. “Unfortunately we didn’t get the win, but everyone tried really hard and that’s what we wanted.”

One piece of play that would become synonymous with Hayden Young in the lead-up to the AFL Draft was a remarkable 50-metre plus kick to hit a target running in space on a 45 degree angle – but Young spotted that player. The player was Wareham who admitted some of the Vic Country kids reminded him of featuring on that highlight reel moment by being the recipient.

“I think I’ve been doing that my whole career, but it’s just like Hayden’s one of those blokes who can pull it off pretty easily so yeah I’m just grateful to play among those people like Caleb Serong, Hayden Young who are just so elite.”

Wareham rates his strengths as his running ability to break the lines and use the ball well by hand or foot. Despite being a slick user of the ball, the midfielder said he has improved that aspect of his game even further over the preseason. It was one of a number of areas Wareham has improved since last season and will look to continue to improve throughout 2020.

“I think I’ve improved my kicking over the preseason and hopefully I can showcase that in a game,” Wareham said. “Coming in as a skinny 70kg kid, just trying to build my strength up and a bit of weight around the hips. “Trying to get more of that contested ball.

While the COVID-19 global pandemic has rocked the sporting world, as soon as Wareham and his teammates can get back on the field, you can be sure he will just take the moment for what it is and enjoy it.

“I think it’s just really enjoying my footy,” he said. “I probably got in a mood towards the start of last year when I got a few injuries where I wasn’t enjoying it as much but coming in as a 19-year-old I really enjoy it a lot more. “I’m just a bit more relaxed and just enjoying the experience.”