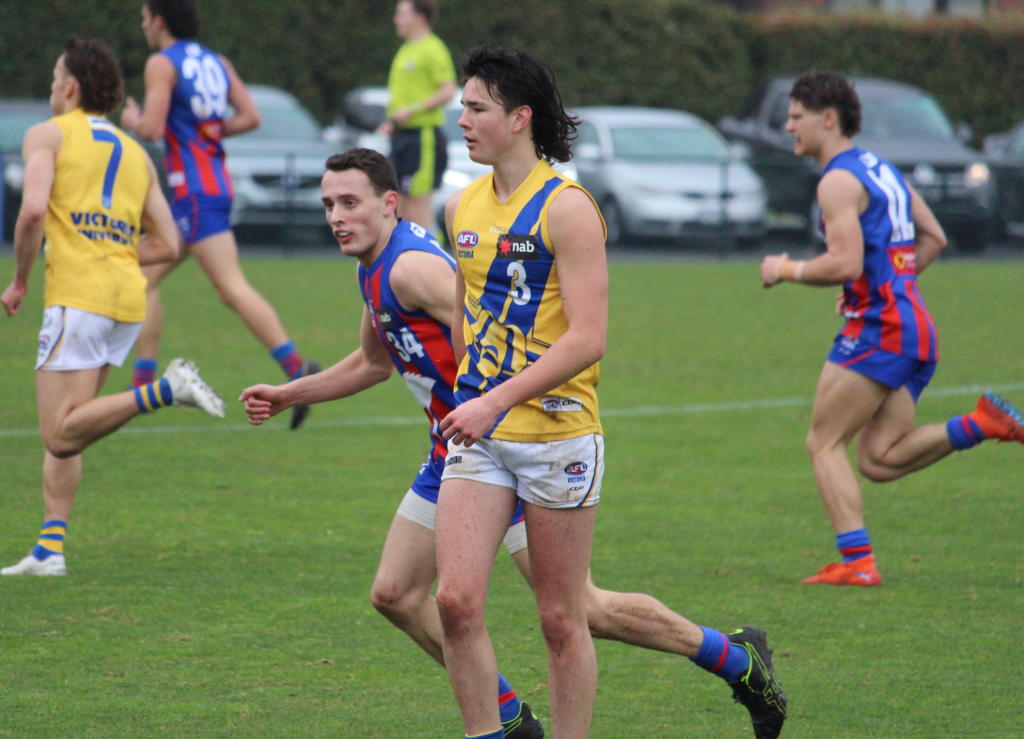 AS the postponement of all seasons commenced over the last few weeks, we head back to the pre-season a few weeks earlier where we sat down with a number of athletes across the country. In a special Question and Answer (Q&A) feature, Draft Central‘s Michael Alvaro chatted with Western Jets’ Eddie Ford at the NAB League Fitness Testing Day hosted by Rookie Me.

MA: Sitting out this one, what’s going on?

EF: “I just got a little injury in my knee. “It’s under the ACL category, but it’s not a major one, it’s like an ACL stretch. So it’s a week or two or whatever, it’s nothing serious. “Just taking this one pretty easily and just resting for Round 1.”

How’s the preseason been for you?

“It’s been a bit odd for me. “I’ve had a couple of injuries, so this is the second lot of time I’ve done this type of injury. “I’ve done it once in the Metro camp earlier in the year and a couple of ankle injuries in December, so I’ve had a few hiccups but I think my fitness is still up to the level and obviously we’ve got to keep building back up. It’s been a bit interrupted, but it’s been fine.”

How’d you rate your bottom-age year?

“I was lucky enough to be a part of the Vic Metro program as a bottom-ager last year so that was a really good experience, getting around all the boys who got drafted this year which was awesome. “They’ve all got really good standards and they go about it really well so that gave me a goal to look towards. “Especially the blokes who got drafted pretty high, Matty Rowell and Noah Anderson. “They go about it really well and that was really good for me because I was able to play a few practice matches. “I wasn’t able to get into the squad unfortunately but it was good. “The Jets as a bottom-ager was pretty good. “Played most games for them and it was really good.”

Speaking of good standards, you trained at Collingwood over the off-season as part of the Vic Metro hub, what was that like?

“Yeah that was really good. “That was just before Christmas and that was like even a bigger step up to see how they go about it. “Especially their preparation and recovery, it’s just unreal. “They put so much effort into that and anything to get their body right. “It was pretty good to get around all the boys like Scotty Pendlebury and Brodie Grundy.”

What AFL team do you support?

“I go for St Kilda, so probably not the best place to be at Collingwood, but it was good.”

Back on the topic of Vic Metro, which teammates are you looking forward to playing alongside this year?

“So hopefully Raaky – Cody Raak from the Jets – is still there, he’s a good mate of mine from the Jets. Bailey Laurie from Oakleigh is a really good bloke, he’s quite funny. “I’ve roomed with him at one of the camps recently, and yeah all the blokes are pretty good around there. “They all have good interests and all want to play well, so it’s good.”

On the field, you played that half-forward role a fair bit last year, what position are you looking to play in 2020?

“I’m trying to go out and get a bit of a kick in the midfield, so I’m looking to play there a bit more. “That sort of role where you play midfield, rest in the forward and if the team needs some drive I can try to be that one that gets the ball forward. “But yeah I think midfield for me is an aim, to play a bit more of it as a top ager.”

You’ve got a fair bit of athleticism about you, particularly when it comes to marking, what strengths do you think you can show in the midfield?

“I like to think I’ve got a bit of X-factor about me that I can do some things that are pretty odd at times, but it’s good. I just keep bringing that X-factor. “The high marking sometimes, so I can go down forward and take a big grab and hit the scoreboard as much as I can as well which should be good.”