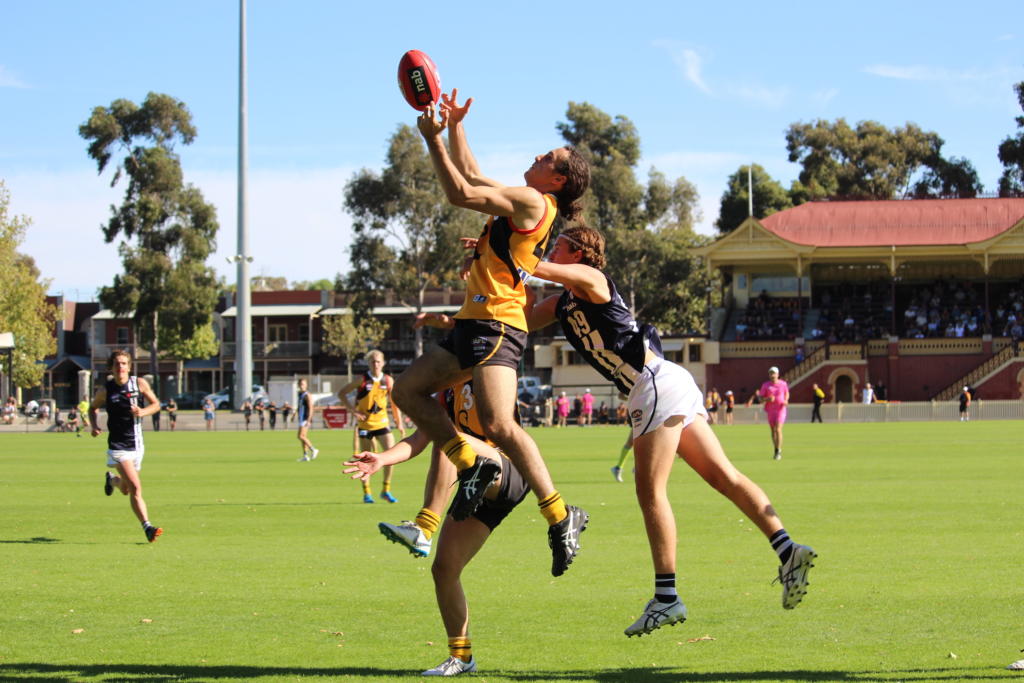 IF you are missing footy like we are, then let us somewhat salvage that with a look back in a new series of Classic Contests. In today’s contest we look at one of the would-have-been Round 3 clashes in the NAB League this year between Dandenong Stingrays and Geelong Falcons. In this edition, we wind back the clock to 2019, where these two teams faced off in a wind-swept game in Bendigo to eventually split the points.

The reigning premiers, Dandenong Stingrays headed into the Round 3 clash undefeated, but only just. They had survived a comeback against Greater Western Victoria (GWV) Rebels by a goal, then won in a thriller against Murray Bushrangers by five points just a round earlier. The Falcons had lost in heart-breaking circumstances to the Rebels in Round 2, but it was a much better effort than their Round 1 thumping at the hands of Bendigo Pioneers. Nonetheless, Dandenong headed in as favourites based on overall form, though the weather threatened to make it challenging for all involved.

Geelong had the breeze in the opening term and had plenty of chances, booting 5.5 from 10 scoring opportunities, though it was Dandenong’s accuracy – three goals from as many scoring shots – that had the Stingrays buoyant early on. It took Dandenong six minutes to get the early chance in the second term as Cody Weightman kicked a ripper to cut the deficit to 10 points. Melbourne-listed Austin Bradtke made it two consecutive goals for the Stingrays and the teams were separated by just a kick, before Oliver Henry steadied the ship with an important goal – his second of the contest. It would be Geelong’s only major of the term, as Dandenong added two more, with Corey Ellison booting his second and Reece Orchard his first in the last minute for the Stingrays to hit the front by four points at half-time.

Regaining the benefit of the breeze, Henry converted his third and fourth goals either side of a Mitch Langan major. Gennaro Bove and Sheldon Ham soon joined the party and the Falcons had five consecutive goals on the board and led by 30 points at the main break in what was truly a complete domination and utilising the breeze to perfection. Trailing by five goals at the last change, Dandenong Stingrays made a swap, throwing key defender Sam De Koning into attack for the last term to provide a target with the wind in their favour. It seemed only a matter of time before the Stingrays began to chase the Falcons down, and Nathan Heath was the first on the board in the opening three minutes, before De Koning converted in the 10th minute shortly after a behind and the deficit was 15 points with 15 minutes on the clock.

Out of nowhere and against the run of play, Henry stepped up for the Falcons and booted a crucial fifth goal to push the margin back out to 21 – it would be Geelong’s last score for the game. Dandenong relentlessly attacked as De Koning kicked a second major, while Luca Goonan also made good on a chance. With five minutes left, Ned Cahill missed and the margin was a flat six points. The ball was camped inside Dandenong’s forward line for the last five minutes, with plenty of chances to rush through a crucial behind, but the Stingrays were going all-out, though as it would show in hindsight, a behind could have won them the game. Instead, it took until a mark just seconds before the siren – to Heath – before a result would be decided. He calmly came in slotted the goal with Dandenong celebrating. It had been a terrific comeback, but at the end of the day, both teams split the points and it was a deserving finish to a game of that quality.

Dandenong Stingrays would end up reaching the first week of finals before losing to Calder Cannons, while Geelong Falcons’ season would end at the hands of Sandringham Dragons in Wildcard Round.