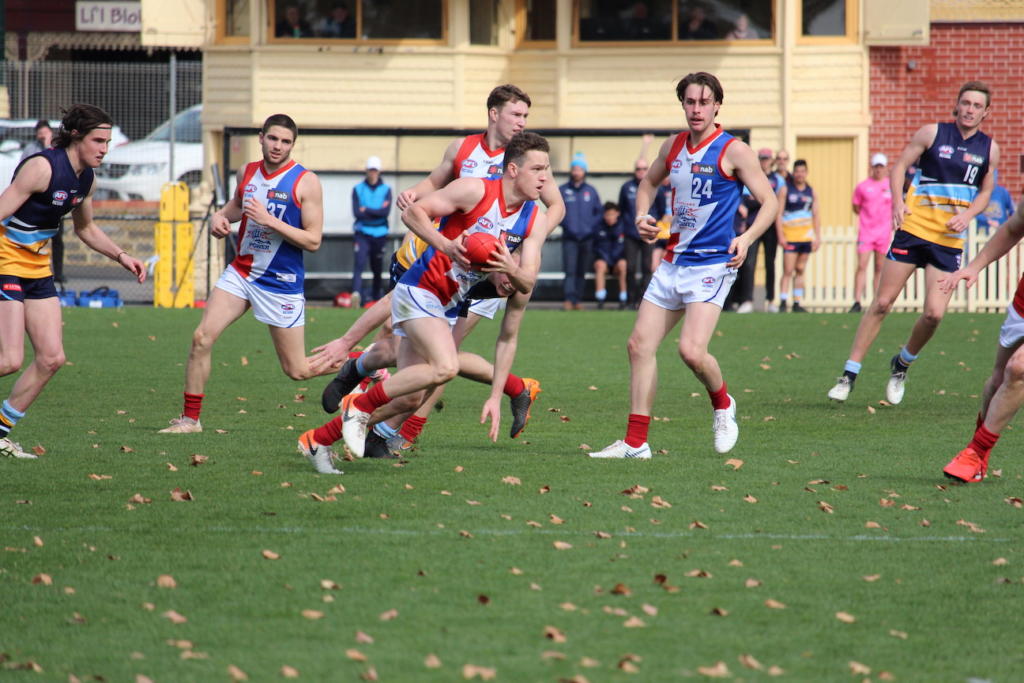 IF you are missing footy like we are, then let us somewhat salvage that with a look back in a new series of Classic Contests. In today’s contest we look at one of the would-have-been Round 3 clashes in the NAB League this year between Bendigo Pioneers and Gippsland Power. In this edition, we wind back the clock to 2019, which was the team’s most recent meeting that pulled out a classic in the final round of the year.

It was a day that promised so much in terms of the weather, and then provided what Victorians have come to expect as “Melbourne weather” – in the Country. A triple header at Queen Elizabeth Oval saw spectators greeted by sunshine, but a few hours later pounded by pouring rain with the sun teasing those who had stuck around, in the final quarter of the day. The first game was between one of the premiership contenders in Gippsland Power, and a side that had been competitive throughout the year despite amassing just the five wins in Bendigo Pioneers – not indicative of how good they had been. Gippsland had to win to ensure the Power took top spot, with a loss relegating themselves to third after Oakleigh Chargers had downed Sandringham Dragons the day before. For Bendigo, they could have finished 10th on the table, regardless of the last game of the day’s result between Murray Bushrangers and Greater Western Victoria Rebels, with Bendigo having a higher percentage than both sides.

Bendigo showed it would be up for the fight with top prospect, Thomson Dow booting a goal early and Seamus Mitchell and Riley Wilson converting first term majors. Riley Baldi ensured his side would get on the board in the opening stanza, but the Power still trailed by 13 points at the break. When Wilson booted his second just 90 seconds into the next term, the Pioneers led by 19 points and the home team was up and a bout. It would not last long however, as Sam Flanders and Ryan Sparkes both kicked majors within three minutes of the Pioneers’ goal to drag the margin back to seven points. Jack Ginnivan kicked a steadier midway through the term, but that was countered by Baldi’s second and a late goal to future Roo, Charlie Comben.

Now holding just a one-point lead at the break, Bendigo needed to maintain the pressure against a side that was capable of scoring in quick succession. For the first 12 minutes, neither side could buy a goal as the Pioneers booted 0.4 to the Power’s 0.3 in what was a case of missed opportunities up either end. Future Carlton draftee, Fraser Phillips broke the 20-minute drought with a major in the 17th minute of the third term to give his side a four-point lead. Comben then added a behind to make it five, but bottom-age tall Josh Treacy came to the rescue and converted a huge goal with a few minutes remaining in the term to secure a one-point lead for the home team. The final term was one of two halves as Ginnivan booted a second goal three minutes into the term, and then Mitchell added another one to his name. Midway through the term, the Pioneers led by 12 and it seemed another goal or two might have been enough. Sensing the importance of a major, Mason McGarrity popped up to kick a vital one for the Power, and then defender Tye Hourigan found himself in the most unique circumstances, thrown forward and taking a crucial mark deep inside 50. He converted a huge goal with nine minutes remaining to put his side in front.

After Zach Reid had won the game against Dandenong Stingrays at a wet Shepley Oval, it seemed another defender had come through at the right time. But Noah Walsh had other ideas, with the Pioneer kicking a goal with three and a half minutes on the clock. Just when it looked like there might be the final twist, McGarrity found another one with a goal in the final two minutes and the Power were back up by three points. Phillips missed the chance to ice the game in the final minute and the Pioneers rushed it down to try and win it all, but it was well rebounded by the Power and a mark to Phillips in the last few seconds handed him another chance at goal. This time he converted it – after the siren – to provide the Power with a thrilling 10-point win and second spot on the NAB League Boys ladder.

Gippsland Power went on to reach the preliminary finals before bowing out to Eastern Ranges, while Bendigo Pioneers lost to Northern Knights the following round at Preston City Oval in Wildcard Round.