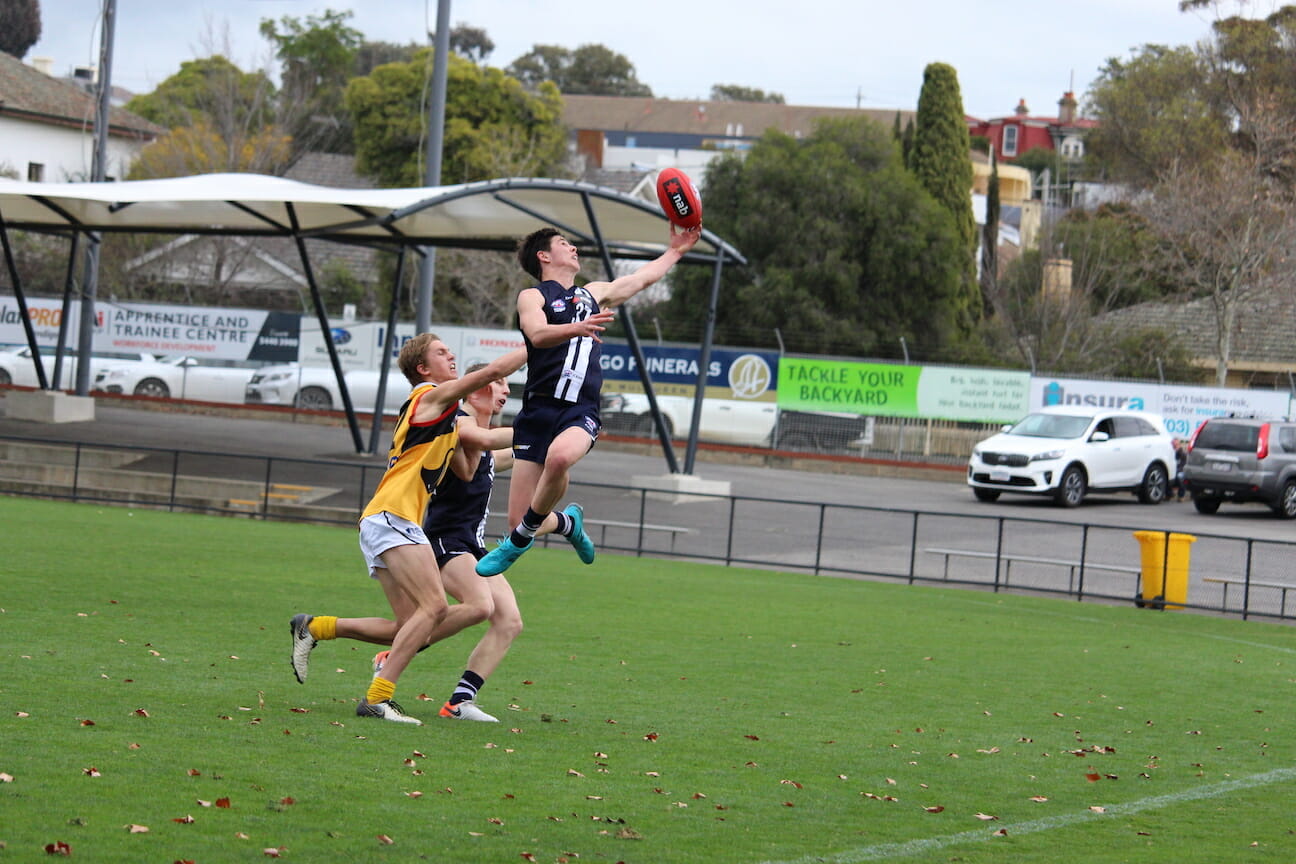 WITH a brother already in the AFL and a great support network around him, Geelong Falcons’ Oliver Henry is just taking it one “piece of the puzzle” at a time. It might have sounded like he forecasted what would become a significant talking point of the current COVID-19 pandemic when he spoke to Draft Central at the NAB League Fitness Testing Day hosted by Rookie Me, but he knows there are many parts of a footballer’s journey that form him or her into the player they become.

“It’s all just a piece of the puzzle I guess,” he said, of having connections such as Geelong Cats’ Jack and being a member of the Vic Country hub. “I love who I’ve got around me, I’ve got a great family. Really supportive and yeah both my brothers have been the best help for me in my life and Vic Country has so much great resources to feed off, and Leigh Brown he’s a great coach. “Yeah I’ve enjoyed every minute of it and hopefully just keep doing what I’m doing what I’m doing and keep enjoying it.”

Despite being at the NAB League Fitness Testing Day, Henry was unable to test due to a tight left hamstring. He said it was “just a little bit precautionary” and that the current strengthening work on it would have him feeling good for the season. That season’s start is even further away now than imagined, but Henry was living in the moment at the testing day, enjoying catch-ups with friends.

“Yeah it’s been good,” he said. “It’s pretty positive around all the boys today. “We’ve all bonded after this preseason and it’s really shown in how connected we are as a group today. “The boys are doing well, testing really well. Happy for them, wish I could be out there.”

Despite the niggling hamstring soreness, Henry said his preseason as a whole had been successful and he had not suffered any major long-term injuries which was the main goal of getting through relatively unscathed.

“Yeah it’s been pretty solid block of preseason for me,” he said. “I’ve stayed away from any injuries, major ones that is. “I’ve felt a lot better and developing pretty well at the moment. “Just learning as much as I can.”

Indeed Henry was one of the shining lights for the Falcons throughout 2019, showing an ability to play up either end in a Geelong side that ultimately struggled, but reset for 2020 with plenty of bottom-agers getting their chance.

“The bottom-age year for me… the team didn’t do too well but I thought I developed a lot better as a footballer playing against a lot better opponents so I think it’s going to hold me in good stead for my future in whatever level I play at,” Henry said. “I’m happy with how I’ve progressed and what I’ve made. “It’s all just an even slate again, a new season.”

With the experience of the bottom-agers no doubt helping their development for their top-age year, Henry said he was looking forward to what the team could produce, likely with him starting in defence alongside Vic Country hub and Falcons teammate Cam Fleeton. Henry said he still expected to play up the opposite end of the ground as well with his aerial ability one of his strengths.

“I’d still like to be a bit of a swingman in the fact that I can play on two different sides of the ground,” he said. “It’s just all learning for me at the moment. If that means I can play as many positions as I can and just adapt, yeah I’d love to try doing that.”

Playing in defence means he could potentially come up against highly touted top draft pick Jamarra Ugle-Hagan, a teammate at the Vic Country hub. Henry said he was up for the challenge and keen to battle his mate.

“I’d love to try and play on Jamarra, he’s quite a good prospect,” he said. “He’d push me to my limits I’d guess and I’d love to line up on him, he’s a good mate of mine.”

Most of all, Henry is keen to get stuck into the matches and develop as best as he can in his top-age year at both NAB League and AFL Under 18 Championships level for Geelong and Vic Country respectively.

“It’s all just development for me,” Henry said. “I mean one of the major goals for me is just good team success with the Falcons and Vic Country if I was to play in that. “So at the moment I’d love to have a solid winning streak for Falcons. “In doing that, it opens up a lot more opportunities for individual success so I think that would be a great start point for me.”