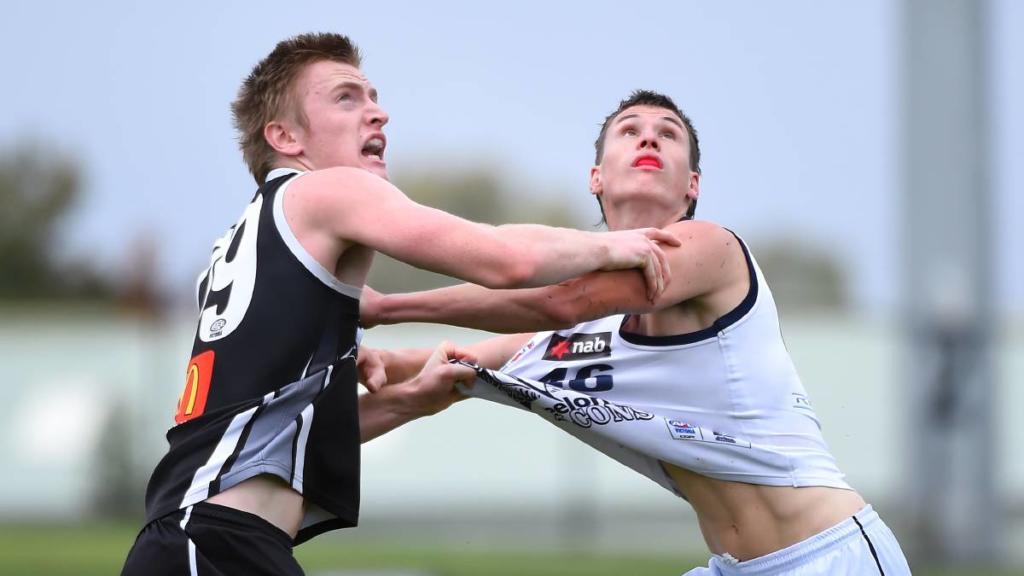 IF you are missing footy like we are, then let us somewhat salvage that with a look back in a new series of Classic Contests. In today’s contest we look at one of the would-have-been Round 2 clashes in the NAB League this year between Greater Western Victoria (GWV) Rebels and Geelong Falcons. In this edition, we wind back the clock to 2019, when the sides took to the field at MARS Stadium and had a number of exciting prospects make it an even contest.

In recent years, Geelong Falcons have had the wood over GWV Rebels, particularly when at full strength, but given the game was at MARS Stadium and the teams were considered pretty even, many attending the game hoped it would live up to expectations. The first half certainly suggested that might be the case and the two eventual top-age draftees in Cooper Stephens and Jay Rantall showed just why they were so highly rated with some terrific performances. For Rantall it was just his second game, while for Stephens it would be his last full game before breaking his leg a week later.

After the Rebels missed a few chances in the first term, Geelong’s Chas Karpala was the first on the board for the match, handing his side an early four-point advantage 14 minutes into the contest. Isaac Wareham quickly responded for the Rebels to get the home side started, before Harry Stubbings again handed his side the lead in the last few minutes for the visitors to head into half-time with a narrow five-point advantage. Inaccuracy was troubling the Rebels with both side booting two goals in the second term, but the Rebels also booting five behinds in the blustery conditions. Rantall broke the ice in the seventh minute mark for the fifth lead change of the match, but Mitchell Langan again found a response for the Falcons, booting back-to-back goals to open up the largest lead of the game – nine points. A late major to James Cleaver who was being tested forward after playing as a defender in his top-age year brought the Rebels to within a point at the main break.

The Falcons put the foot down after half-time thanks to the likes of Stephens, Charlie Lazzaro and Keidan Rayner, whilst Charlie Sprague was having an influence further up the ground in midfield. Max Annandale, Karpala and Jay Dahlhaus – cousin of Luke – all had majors within 10 minutes of time in the third term and opened up a very comfortable 27-point lead. Darcy McEldrew went forward and kicked a crucial major, which was followed up by a goal to clever forward, Izaac Grant before Stephens steadied his side to push the margin back out to 20 at the end of the third term. Little did Falcons fans know, this would be the last major of the game as the Rebels clicked into gear in the final term – not without further inaccuracy – to boot 3.6 to 0.3 and run over the top of Geelong.

Four consecutive behinds for the Rebels in the opening seven minutes threatened to derail the comeback for the home side, before Cleaver’s second released the pressure valve a couple of minutes later. When Mitch Martin kicked truly five minutes later, the margin was less than a kick and it was well and truly game on. Sprague missed a chance midway through the term for the Falcons, as did the Rebels before McEldrew became the saviour in the dying minutes. He converted a goal with a couple of minutes left on the clock to hand his side the lead. A late behind to Charlie Harris brought the margin back to one with 15 seconds on the clock, but the Rebels were able to hold on for a memorable win.

Stephens was the standout for the Falcons in midfield alongside Lazzaro, with the pair combining for 54 disposals, seven tackles, nine clearances, five inside 50s, three rebounds and a goal. Rayner racked up 10 rebounds from 25 touches and three inside 50s, while Sprague was equally influential at half-forward thanks to 23 touches and seven inside 50s. Noah Gribble (21 disposals, three marks and five inside 50s) was prominent, while Stephens’ fellow AFL Academy top-age teammate Jesse Clark racked up nine rebounds and 16 disposals,

Neither side would go on to have great seasons, with the Falcons winning just three games and drawing another from 16 outings to finish in the bottom of the table with a heavy Wildcard Round loss to Sandringham Dragons, while GWV Rebels also bowed out at the Wildcard Round stage following a defeat to Western Jets at Box Hill after winning six games throughout the season.