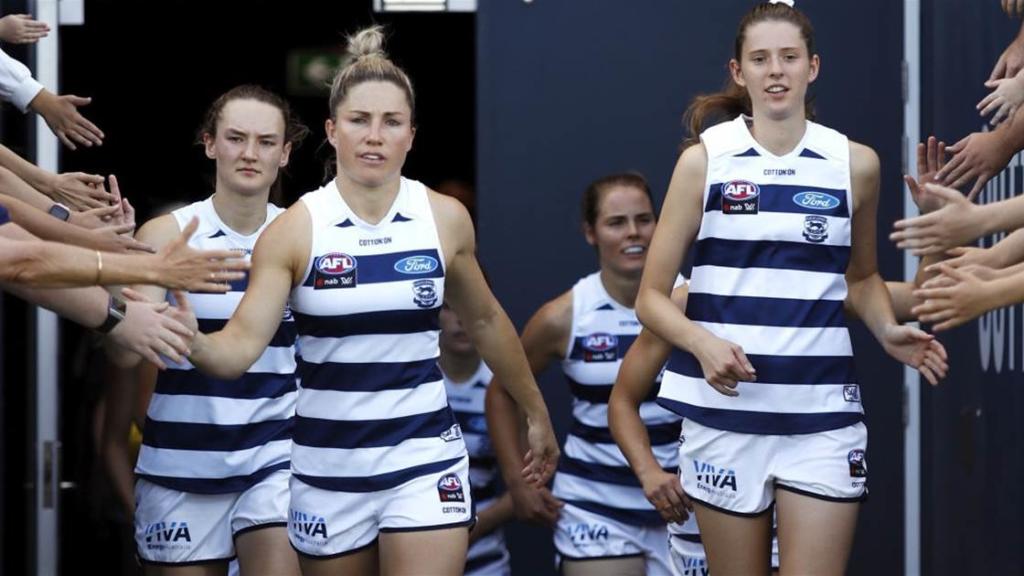 GEELONG finished its second AFL Women’s campaign half a game away from consecutive finals berths, recovering from three defeats to open the season to end with a 2-4 record. The Cats were thrice beaten on home turf in what was a season of ups and downs, leaning on fixtures against expansion sides to eventually claim their two home-and-away victories. Despite a second knee injury to Nina Morrison and the retirement of inaugural club captain Melissa Hickey, there were plenty of positives to be taken from Geelong’s year; with the exuberance of its developing side shining through in glimpses, and a host of players taking their games to the next level. Revisit the good, bad, and otherwise produced by the Cats this season in our review, with a focus on their outstanding players.

Having to recover from three consecutive losses to open the season is far from ideal for any side, and that was just the challenge that Geelong faced this year. After bringing it to Fremantle for three quarters in Perth, the Cats lost twice on their own patch and put a sizeable dent in their finals aspirations. But a roaring win against the Tigers in Round 4 got them on the board, and a rousing comeback victory over Gold Coast a week later had them on track. But again, it was always going to be tough to overcome North Melbourne and lock in a post-season entry, as the Cats finished their season on another low point despite the positives of the previous fortnight.

This was an ultra-impressive win for Geelong having been tested away from home by a team which always has a crack in the Gold Coast SUNS. The Cats looked to have blown their early ascendancy as a second term lapse saw them fall behind, but the fighting spirit to get back on top and pull away showcased the best of the Cats’ character. 2018 draft class pair Morrison and Olivia Purcell starred in the win with over 20 disposals each, providing a glimpse of what Cats fans can look forward to.

For all the promise around Geelong’s season came bouts of bitter disappointment, and this was arguably the most difficult pill to swallow. After steadily building form in each of the six Rounds, former number one draft pick Morrison looked to be flourishing at the top level, and the shock of a second ACL tear in as many years was felt across the competition. We got to see her potential, but we can only hope to see the end product after another heartbreaking setback.

The highly-touted youngster was one of many Cats to make an enormous step in their development this season, moving into the elite midfield group on the back of a strong campaign. The 19-year-old was her side’s prime mover each week, and added the happy knack of kicking goals to her consistent ball winning capabilities. A clearance machine, Purcell also led her side for disposals, metres gained, contested possessions, score involvements, and inside 50s. The only Cat to earn All Australian squad selection.

Much of the success of Keryk’s season can be put down to a move to the backline, with the former-Blue thriving in her new role behind the ball. In addition to collecting career-best numbers in a range of categories, the 25-year-old also led the Cats for rebound 50s this season while disposing at an efficiency of 70 per cent. A calm user who reads the play well, Keryk was a key part of a solid back five for Geelong.

Perhaps one of the midfielders to have flown under the radar at times given the fanfare afforded to others, the hard-working Crockett-Grills finished the year only second to Purcell for disposals as a constant in the engine room. As one of the most-improved Cats this year, the 25-year-old proved her worth at the elite level with a string of solid performances working both ways.

‘Rocky’ has been a fan favourite since day one at the Cattery, and did no harm to her reputation with an outstanding 2020 season. Cranston was a terrific generator of speed on the outside, while also finding the goals in four of her six outings. And who could forget her awesome solo effort against Fremantle in Round 1, showcasing everything good about this gutsy footballer.

Rocked by a finger fracture on the eve of the season, McDonald missed the first two round before making a swift recovery to feature prominently in the back half of the year. As arguably the most important member of Geelong’s defence last season, the 28-year-old former-Bulldog got right back to her ways in organising a solid back five and leading as one of the Cats’ 2ICs. A great interceptor and mover of the ball.

There may be a slight theme in that much of Geelong’s improvement came from its defence, and Webster was another to take a significant step in her development this season. After taking out the Cats’ VFLW best and fairest award, the 172cm prospect translated that form well to the elite level across all six games, showing marked improvement as an able user in the back half.

The Cats’ prize pick in the 2019 draft was Brown, who lived up to all expectation with a debut campaign beyond her years. The 19-year-old father-daughter recruit played all six games in her maiden season, locking down a role in Geelong’s back five in quick time. Barring a disposalless outing against Richmond in Round 4, Brown showed plenty of promise as a solid play-breaker inside defensive 50.

Last year’s finals berth despite a negative record did not do much good for the Cats’ draw in 2020, and in all fairness, they won each game they were definitely expected to. The flashes of brilliance were great to watch, however too sparing, but those key lapses in form will be ironed out once this developing squad further improves. If the rate of improvement shown in some players can be matched next year, watch out.