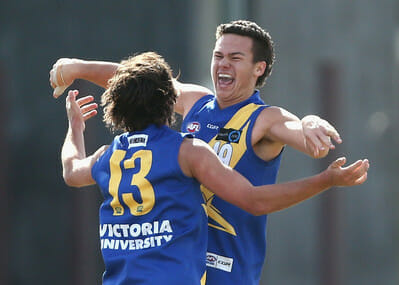 IF you are missing footy like we are, then let us somewhat salvage that with a look back in a new series of Classic Contests. In today’s contest we look at one of the would-have-been Round 2 clashes in the NAB League this year between Western Jets and Oakleigh Chargers. In this edition, we wind back the clock to 2017, when a top-of-the-table Oakleigh Chargers outfit was expected to make light work of last placed Western Jets heading across the West Gate Bridge to play at Burbank Oval. Except nobody told future pick one, Cameron Rayner.

The Round 15 clash took place at Western Jets’ home ground down at Williamstown. When first takes on last, not too many expect a surprise result, especially when the opposition is littered with potential AFL stars. That was to take nothing away from Western who had a couple of guns of their own in highly touted AFL Academy members, Rayner and Lachlan Fogarty, and the smooth moving Buku Khamis, as well as a couple of talented bottom-agers in Xavier O’Halloran and Zak Butters. It was more Oakleigh’s roll call was ultra impressive as Jack Higgins, Xavier O’Neill, James Rowbottom and Riley Collier-Dawkins would go on to be drafted a couple of months later, with Isaac Quaynor and Atu Bosenavulagi joining them in the AFL a year later, and even a 16-year-old Dylan Williams was strutting his stuff and showing his future potential for the Chargers. The round marked the return of the school footballers, with Western having gone down to Sandringham Dragons by five goals the week before, while Oakleigh had triumphed over Calder Cannons by 33 points.

Straight out of the blocks it was clear the Jets were firing with the return of their stars, Rayner and Fogarty. In fact it was the latter who got on the board early, and while his major was countered by the clever Higgins, Western added a couple more majors before the first quarter break to lead by 14 points. It had taken Oakleigh more than 10 minutes to score, but considering the blustery conditions, it would be hardly panic stations just yet. Soon, it was the Chargers that decided enough was enough, with Higgins snagging is second, and then Lucas Westwood and Daniel Scala piling on the next three goals to regain the lead for the visiting team by less than a kick. Up stepped Rayner who booted a crucial major late in the quarter for his side to head into the main break with a three-point advantage still.

Former basketballer, Matthew Day showed why he was highly rated with a clever goal four minutes into the third term to hand his side back the lead, something that would change regularly from this point on. O’Halloran kicked truly for his side and the home fans were up and about again, before future Eagle, O’Neill kicked his first to hand his side the lead – a seven-point buffer going into what would be a highly anticipated last quarter. When called upon, Rayner stepped up again to kick a crucial major and draw within two points, though no sooner had he done that and Scala had his third and the Chargers had some breathing space. Blake Graham kept the game on edge with a goal in the ninth minute mark, and for the next 10 minutes, a Jets behind was the only score, and the close was ticking down with two points separating the sides. Neither team was giving an inch until Toby Kopa popped up with a massive match-winning goal with eight minutes remaining as the Jets were able to trap the ball in their forward half for the most part, and despite inaccuracy, hold on for a memorable six-point win.

For the Chargers, the always unlucky in terms of injury, Jack Roughsedge racked up 28 disposals and seven tackles, while Williams was named second best with 16 disposals, one mark and one tackle. Higgins had his lion-share of the ball with 27 disposals, two marks, six tackles and a goal, while Scala was the dominant goalkicker with three majors from 10 touches, one mark and three tackles. Collier-Dawkins (six disposals) and Quaynor (five disposals) were quiet, while Rowbottom (16 disposals), O’Neill (15 disposals, seven tackles and one goal) and Bosenavulagi (eight disposals and one goal) were solid.

Oakleigh would still finish as minor premiers for the 2017 season, but due to the straight elimination finals series – after smashing Northern Knights at Victoria Park – would bow out to Sandringham Dragons in the preliminary finals. Despite Western Jets picking up three wins in the last four games of the season – thanks to the inclusions of Rayner and Fogarty – they would fall short of finals, finishing 10th and six points outside the top eight. It was reasons like this that ultimately saw AFL Victoria change the finals series to include Wildcard Round.