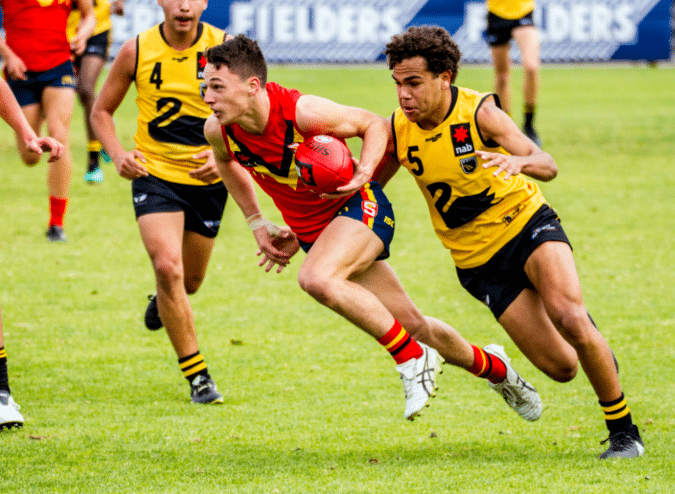 CENTRAL District’s elite fleet of smalls among its Under 18 ranks was all set to be unleashed on the big stage in 2020, with all three State Hub members – Isaiah Dudley, Corey Durdin, and Lachlan Grubb – making great inroads over the past two seasons. But given the trio and the rest of their Bulldogs teammates will have to wait to get back on the park, we trace back to the South Australian preseason testing day hosted by Rookie Me to get to know them, where Draft Central had a chat to the promising youngsters.

Cousin of recent Melbourne draftee Kysaiah Pickett, Dudley is cut from the same cloth on-field too. An aggressive and clever small forward who can also push hard up the field, the bottom-ager has a great eye for goal and knack of finding the ball. With back-to-back State Under 16 campaigns under his belt, the 165cm prospect is working on his running and looks likely to be considered strongly for a berth in South Australia’s Under 18 squad this year – all things considered.

His partner-in-crime in the State 18s forwardline may well be Durdin, a standout at each level of his junior development having picked up the Kevin Sheehan Medal in 2018 as the Under 16 Division 1 MVP. Durdin also made his League debut for Centrals last year as a bottom-ager, and looks primed to hone a small forward role having already proved himself as a worthy ball winner. With a year of State Under 18s already under his belt, the 172cm gun looks forward to being more of a leader this time around at the national carnival.

The third of the trio is Grubb, who was knocked back from the State Under 16 squad in 2018 but has kept at it to become a member of this year’s hub. Another small type at 175cm, Grubb comes from a great football and athletics pedigree and has already matched his father’s feat of playing at SANFL Reserves level. With that senior experience already made, the speedster also hopes to make moves further afield with a sharpened defensive game as he continues to develop.

Without further ado, find out everything you need to know, to get to know these three exciting youngsters, in their own words on a range of topics relating to the currently postponed season and beyond.

“It hasn’t been too bad. Just getting through and doing my best, that’s all… I’ve done it a few times now and I think the main focus for me is just trying my best and that’s all I can do really.”

“It’s been good. I think last year as a bottom-ager I found myself a lot like a learner, compared to this year I’m a lot more of a teacher and a leader there. That’s probably been the main difference.”

“One of my goals this year is trying to get that vice-captaincy or captaincy in the State (Under) 18s this year… I’m looking to play 12-plus league games and also make the All Australian team.”

“It was a great experience, being able to have the opportunity to be coached under Roy Laird. I think the biggest thing I felt was I had to adapt to the bigger bodies – for an example, I couldn’t really wrestle them and out-strength them so I had to use my pace.”

“This year I’m really looking directly on my small forward craft, just my pressure role there with some time in the midfield as well.”

“It’s been pretty good so far, I’m going all good… (I went well) in the agility, and the 20m sprint, went alright in that too. It’s really to my game because I can zip-zap out of the (contest) and I can use my pace as well.”

“Well, hopefully I can make the Under 18s State squad as an under-ager and play nationals.”

“I’ll play a bit of everywhere and then hopefully improve a bit on my running and find my spot in the midfield.”

“It’s helped me develop very well, it’s helped me with my running a bit more – I get to push up the ground and push back. It’s been good.”

“He’s a good mentor, he’s my cousin. It was good (playing school football with Pickett), I got a lot of feedback from him and he’s a pretty good bloke.”

“This year hopefully I play with Luke Edwards and Corey Durdin… played a fair bit (with them already).”

“Testing’s been good, obviously we were here at 1:00 and did all the education sessions which were really helpful – about drugs and alcohol, betting, gambling and all that. Now we’ve come into the testing and it’s been a really good day so far.”

“As a small forward, I’m a sprinter as well so definitely the 20m (sprint) and agility really highlight my game. I did well on the agility, did a 7.94 which is my PB (personal best) so I was pretty happy with that.”

“I grew up playing at Tea Tree Gully Football Club from about Under 6s so footy’s always been in the blood and around the family – Dad played footy at Norwood up until Ressies. But I’ve been sprinting since I was about 13, my Dad’s uncle David Grubb won the Bay Sheffield back in 1970 so sprinting runs through the family as well.”

“That was awesome obviously to see Dad do it and then me follow in his footsteps is pretty good. I debuted when I was 16 in the twos and ended up playing six games I think. It was a really good experience because we ended up making finals as well, but got knocked out in the semis.”

“It’s helped my development massively. Obviously I haven’t always been in the state stuff like all the other boys have, I got knocked back from the 16s. But just used that as motivation to get where I am today, obviously being in the AFL Hub now is just massive for my improvement and I’ve just learned so much so it’s been awesome.”

“Obviously the main one is to get drafted, that’s everyone’s goal. And just to play consistent footy, keep the body healthy, just getting everything right so I can maximise my performance at the highest level.”

“Boys like Riley Thilthorpe and Kaine Baldwin. They’re pretty impressive, pretty elite with the way they go about their footy. Just being exposed to everyone playing at that level is awesome so I’m just keen to get around all the boys and have a really great year.”

“Maybe pushing up on a wing, using my speed to go on the outside and I’m working on my contested game as well, just getting cleaner to maybe push up into the midfield as well.”