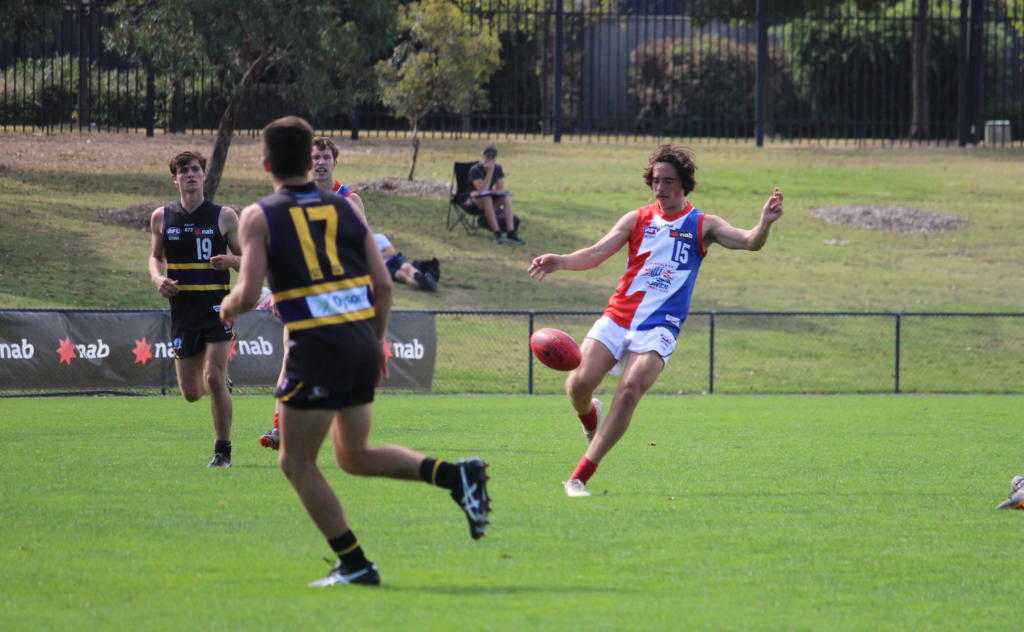 IF you are missing footy like we are, then let us somewhat salvage that with a look back in a new series of Classic Contests. In today’s contest it is a clash between sides who would have played in Round 1 this year. Today we travel back in time to last year’s Round 1 encounter between the Murray Bushrangers and Gippsland Power who played out a thriller at windy Craigieburn.

Fresh optimism joined two country sides at Highgate Recreation Reserve for the start of a new season in 2019. The newly rebranded NAB League was about to get underway and Gippsland Power were considered one of the title contenders. The Power had been smashed in the previous preliminary final with the majority of their top-end players in their bottom-age year so there was much excitement about what they could produce in 2019. Murray was always a tough competitor and nearly always produced a hard-fought effort regardless of opponent. With a top five talent in Lachlan Ash co-captaining the side and one of Gippsland Power’s top talents in Caleb Serong out of the team for his respective side, it was anticipated to be a beauty, and the game did not let spectators down.

In what was ultimately a see-sawing affair for the most part, it was Murray that always seemed to have the upper hand when required. The Bushrangers led by three points at the first break and whilst they were missing some opportunities (booting 2.4), they were getting more looks on goal than their highly fancied opponents. The one player on the opposition side that was making life particularly difficult was Kyle Dunkley, who had crossed back to the Power having finished his schooling last year and missing out on being drafted after a season with Oakleigh Chargers. Seemingly making the transition from medium forward to inside midfielder, Dunkley was everywhere with a long-range goal a highlight in the first half. Up the other end, it was co-captain Cam Wilson who was keeping his side in front, with the Murray forward having a real day out roaming in and out of the forward 50 and providing a target despite being just 170cm. At one stage in the second term, Gippsland got out to an 11-point lead before the Bushrangers hit back to grab the advantage at the main break courtesy of a Wilson major.

The second half started and it was more of the same with both sides challenging and making it increasingly difficult to pick a winner. Gippsland seemed to be more on top by kicking consecutive goals, but again Murray would get back in front with Wilson’s third late in the term. By the final break, the Bushrangers led by five points, but were far from sage. In what would be an arm-wrestle of a last term, the Power would kick three consecutive behinds before Harrison Pepper broke free and converted a major to be the difference. With less than 10 minutes remaining, Gippsland had the eighth lead change, which would be the last. Another couple of behinds to the Power stretched the lead out to three points, with Murray doing most of the attacking in the dying few minutes to try and get a result. Jimmy Boyer and Jye Chalcraft both kicked behinds to get within three, and while the Bushrangers had the ball when the siren sounded, Will Chandler was just too far out to score, and played on with the sounding.

The game would ultimately throw Dunkley in the spotlight for his 21 disposals, six marks, seven tackles, three clearances, six inside 50s, two rebounds and three goals to land at Melbourne in the mid-season draft. In the absence of his partner-in-crime, Sam Flanders had a strong performance with 19 disposals, two marks, five tackles, six clearances, six inside 50s and three rebounds through the midfield, while Pepper – who would later become a defender throughout the year – booted two majors including the match-winner from 13 disposals, six marks and four tackles. Ryan Sparkes was the top ball-winner for the Power with 26 touches, three marks, four tackles, three inside 50s and eight rebounds, while future Lions talent and Power captain, Brock Smith had a solid 18 disposals, four marks, three clearances and four rebounds working tirelessly from defence. In terms of other future draftees who played, Leo Connolly (10 disposals), Fraser Phillips (five) and Charlie Comben (three) were all relatively quiet compared to their output later in the season. Talented bottom-ager Sam Berry also made his presence felt in the match, winning a team-high 13 contested disposals, and picking up 18 disposals, five marks, five tackles, four clearances, six inside 50s and a goal to arguably be second best behind Dunkley.

At the end of the season it was a similar story for Gippsland Power who ultimately suffered a disappointing defeat in the preliminary final after looking so impressive in week one of the finals against eventual premiers, Oakleigh Chargers. For Murray, the Bushrangers would go onto miss finals after bowing out in Wildcard Round to Dandenong Stingrays at Box Hill.