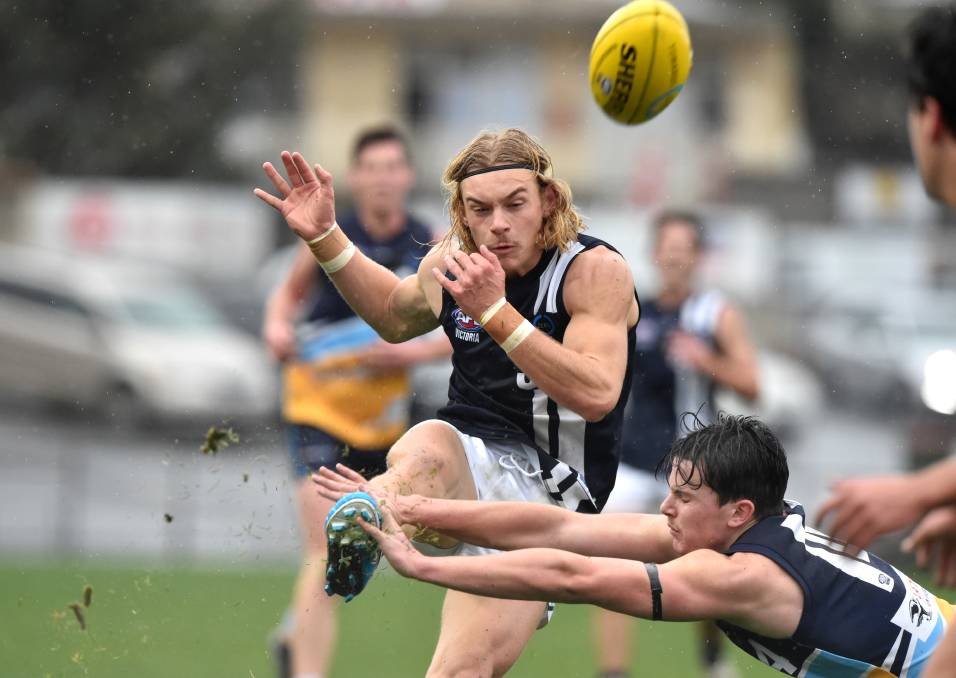 IF you are missing footy like we are, then let us somewhat salvage that with a look back in a new series of Classic Contests. In today’s contest we look at one of the would-have-been Round 1 clashes in the NAB League this year between Bendigo Pioneers and Geelong Falcons. In this edition, we wind back the clock to 2016, when the teams faced off in mid-winter at Queen Elizabeth Oval in Bendigo with a combined 11.18 kicked between them.

Heading into the Round 12 clash, it looked to be more than a formality with the top-of-the-table Geelong Falcons sitting at 10-2 from 12 rounds, while the Bendigo Pioneers were 3-9, though were only a win and percentage outside the eight. In terms of future AFL draftees, Angus Schumacher, Kane Farrell and Kayle Kirby were running around for the Pioneers, while the Falcons had a talented star by the name of James Worpel as a bottom-ager in the side, as well as speedster, Matt Ling. Game day had conditions that were as bad as you could get for a football match, and it showed in the end result with Bendigo laying a record 162 tackles, and both Josh Formosa and Isaac Miller laying 18 tackles each (one shy of the AFL record at that stage)

The first quarter saw the slog begin, with Geelong making more of its opportunities, converting two goals from six scoring chances, while the Pioneers were keeping in touch with 1.1 to trail by nine points at the first break. Many might have expected the ladder leaders to pick it up further after the first term, but the Pioneers instead drew closer, booting 1.3 to 1.0 and were within a kick at the main break. Sensing they had to lift a notch after the half-time break, that is exactly what the Falcons did, booting two goals, which were crucial in the scheme of things. However the Pioneers refused to let go, also converting two majors to maintain a single-digit deficit. Both sides could only manage a goal each in the frantic final term, but the Falcons dominated possession and time inside 50, booting 1.5 to 1.2 and got away with a narrow 12-point victory.

Jackson McLachlan was named best-on for the Falcons, picking up 27 disposals, two marks and six tackles, while Jack Blood laid a team-high 13 tackles to go with 21 touches and two marks. Mitch Diamond had 22 kicks for 25 disposals, as well as four marks and four tackles, while future premiership talent, David Handley was the only multiple goalkicker in the game with two snags from 13 disposals, three marks (one contested) and five tackles. Worpel ended the game with 12 disposals, three marks and four tackles, while Ling recorded 10 touches, one mark and six tackles. Hayden Elliot was the dominant ruck on the ground with 33 hitouts from eight disposals and five tackles.

The Pioneers had a whopping seven players who reached double-figure tackle counts, led by Formosa and Miller with 18, Wade Donnan (17), Darby Henderson (15) and Tom Campbell (14). Formosa also had 20 touches and a goal named best-on for the Pioneers, while Miller finished with 19 disposals and two marks. Henderson (15 disposals) and Kirby (13 disposals, two marks and 10 tackles) was also named among the best. For the future draftees, Farrell booted two crucial goals to go with 14 touches, five marks (two contested) and five tackles, while Schumacher helped himself to 14 disposals, two marks and five tackles.

Geelong would end up finishing in second position on the ladder with 13 wins from 17 games, reach the preliminary finals before going down to a red-hot Sandringham Dragons outfit who would go on to win the flag. Bendigo Pioneers finished 11th in what was an even lower end of the table, picking up four wins from 18 games, just ahead of Northern Knights on percentage.