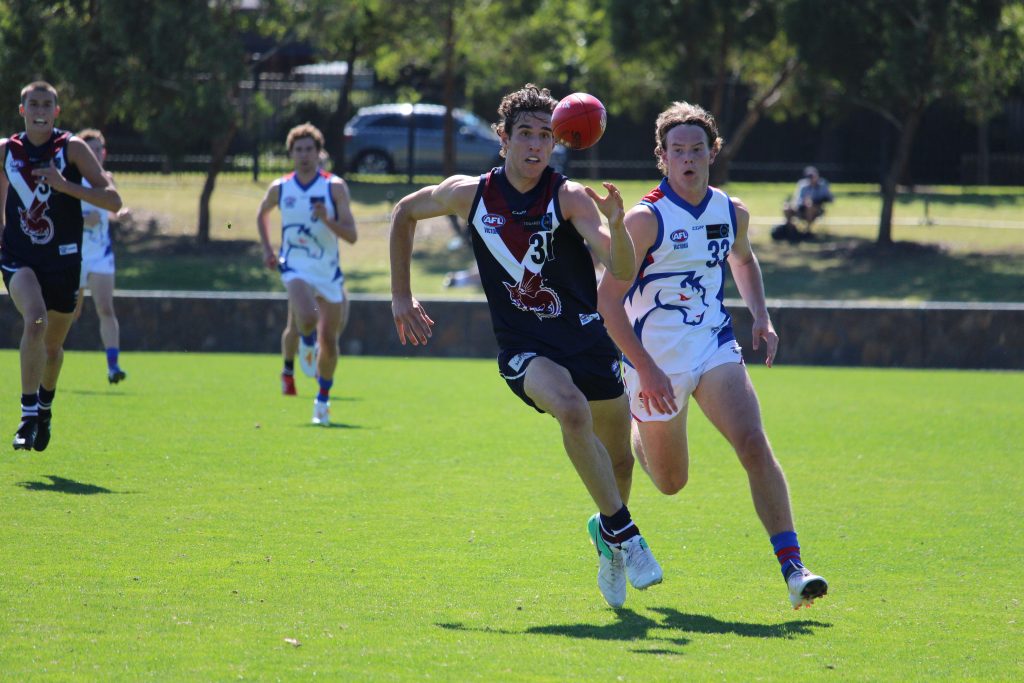 IF you are missing footy like we are, then let us somewhat salvage that with a look back in a new series of Classic Contests. In today’s contest it is a clash between sides who would have played last Sunday week ago if the NAB League Boys competition was on, and we travel back in time to the day Max King not only underlined his future scope, but wrote it in full capitals with multiple exclamation marks. While King’s performance was the most talked about aspect of Sandringham Dragons’ win over Oakleigh Chargers in Round 2, 2018, the two teams were littered with future AFL draftees.

Two heavyweights of the TAC Cup competition, Sandringham Dragons and Oakleigh Chargers were once again considered premiership contenders with a host of future AFL talents on their lists. Coming into the Round 2 clash that promised to be a beauty, both teams had won their first round encounters, keeping their opponents to low scores. Sandringham booted an inaccurate 9.18 (72), but still defeated Northern Knights by 45 points in wet and windy conditions. In the earlier game, Oakleigh Chargers added 8.13 (61) to Eastern Ranges’ 1.5 (11) to get the chocolates there too. To give an idea of the talent on display in the Round 2 clash between the sides, a total of 21 players would go on to be drafted over the next two years, 14 from Oakleigh and seven from Sandringham, but the Dragons certainly had a ton of top-end, top-age talents.

Early on it looked as if Oakleigh was going to get up, making more of its opportunities in front of goal, booting 4.3 to 2.6 in the opening term to lead by nine points, which extended to 10 by the main break. The only thing keeping the Dragons in the contest was Max King, with the unbeatable forward just simply sensational in the air or at ground level. He booted two goals in the first term and three in the second to take his total to five by half-time. He had booted the entire Dragons team’s goals in a half of football, as a few famous names were sharing it up the other end. Will Kelly (son of Craig, Collingwood), Zac Hart (son of Ben, Adelaide) and Ben Silvagni (son of Stephen, Carlton) booted five of the Chargers’ seven goals to the main break.

Four consecutive goals straight out of the gates in the second half to the Dragons turned the game on its head, with King booting his sixth, and then eventually seventh at the end, while a couple of bottom-agers in Jack Mahony (two goals) and Finn Maginness (one) chipped in with majors. Hart booted his third goal of the contest later in the third term, while another father-son prospect, Kyle Dunkley (son of Andrew, Sydney) got on the board early in the fourth to cut the deficit to seven points. That would be the Chargers’ last goal though, with Ben King going forward and taking a major away from his brother, while Max would boot his eighth later in the term, leading Sandringham to a memorable win. Whilst many were involved in that second half, had it not been for King’s work inside 50 in that first half, the Chargers could have been six goals up and almost home and hosed on a windy day.

Max King finished the game as the obvious choice for best on ground, slamming home eight majors – and should have gone into double figures – with five behinds to boot. He clunked a massive six contested marks from nine completed grabs, and the opposition defence was simply hopeless to stop him. It was one of the most complete individual performances by a key forward at the level, and no doubt would have scarred some opposition defenders into the future. Ben King was just as dominant starting up the other end and going forward, taking nine grabs himself – four contested – to go with 20 touches, six inside 50s and that last quarter goal. The top ball winner on the day was Angus Hanrahan (29 disposals, nine marks, four rebounds), while Alastair Richards (26 disposals, 11 marks and seven inside 50s) also feasted on the ball. From other future draftees, Hugo Ralphsmith (16 disposals, five rebounds), Maginness (15 disposals, four inside 50s and four tackles), Josh Worrell (14 disposals, four marks), Liam Stocker (13 disposals, four marks, five clearances, five inside 50s and three rebounds), and Mahony (12 disposals, six marks, five tackles and two goals) all held their own.

Of Oakleigh’s famed side, Trent Bianco was impressive with 26 disposals, four marks, three inside 50s and three rebounds, teaming up well with other future AFL talents in James Rowbottom (23 disposals, three marks, three tackles, five clearances, four inside 50s and three rebounds) and Xavier O’Neill (22 disposals, eight marks, six tackles, three clearances, three inside 50s and four rebounds). A trio of bottom agers in Dylan Williams, Noah Anderson and Matt Rowell all picked up 20 touches, while Isaac Quaynor (19 disposals, five marks and five rebounds) was prolific out of defence, as Riley Collier-Dawkins and Jack Ross added to the ridiculous depth of that midfield. The other two who played in the game yet to be mentioned and made their way onto AFL lists were Noah Answerth and Atu Bosenavulagi (both 15 disposals).

As history would show, Max King unfortunately went down with an anterior cruciate ligament (ACL) injury in school footy a few weeks later, and would miss the remainder of the season. Sandringham Dragons reached the Preliminary Finals where they were bundled out by eventual premiers, Dandenong Stingrays who won in a thriller against the Chargers a week later.