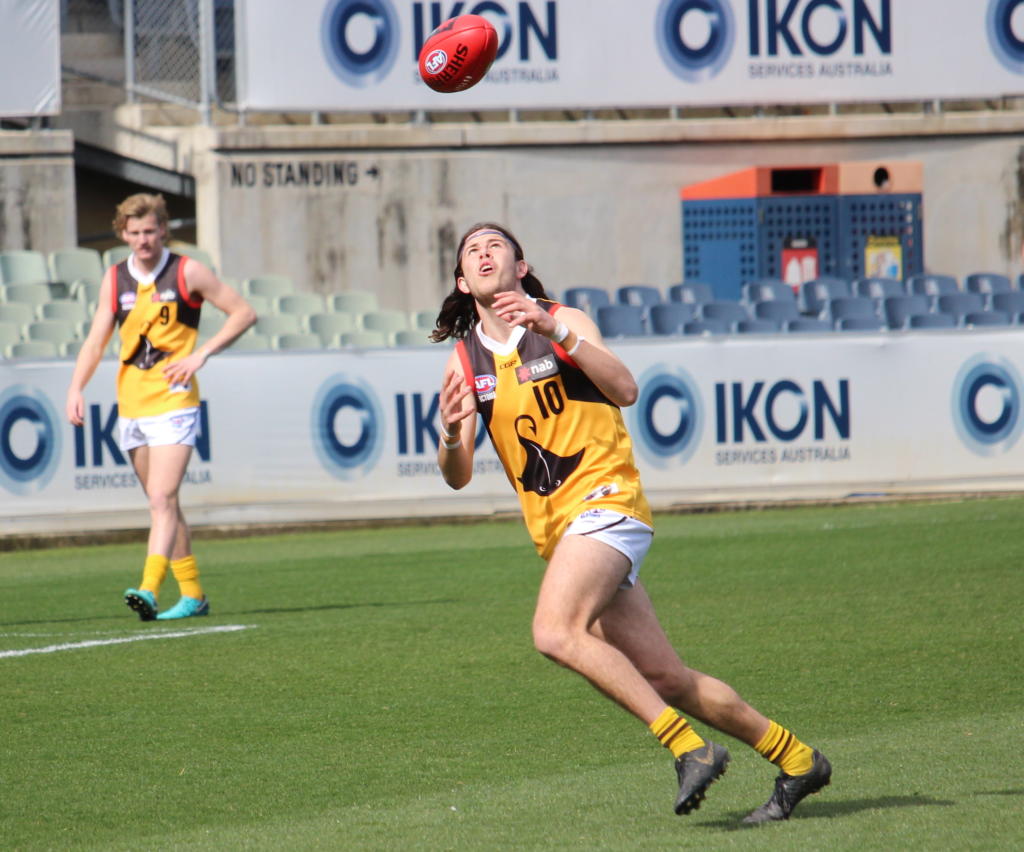 CLAYTON Gay has played at both ends and showed off his natural footballing ability as a bottom-ager in 2019. Now in his top-age year, the Dandenong Stingrays utility has his sights set on just improving and building consistent form throughout the season. While the impact of the COVID-19 pandemic has at the very least delayed the start of the season, Gay spoke to Draft Central at the NAB League Fitness Testing Day hosted by Rookie Me about his hopes for the season ahead.

“(I) just (want to) keep improving every game and being more consistent,” Gay said. “I had a couple of high games and a few low games (last season). “If I can get that margin close together, that’s my main goal this year. “I just think play consistently, that’s the main one that I’m focusing on at the moment.”

It is said you are your own worst critic, and that was certainly the case with Gay, prior to his yo-yo test at Maribyrnong College, declaring he was disappointed with his results thus far, but conceded that “it happens” and that it was just not his day.

“I haven’t really hit the scores that I wanted to, but that happens sometimes, and it’s just not your day,” Gay said. “The 20m sprint I was hoping to at least improve, which I was a bit far off. “I dunno, it wasn’t really my day. “Then I had two DQs (disqualifications) in the agility which hurt me a little bit. “So I only had one to go off.”

While it might have been below his own self standards, Gay enjoyed his bottom-age year with the Stingrays, and was looking forward to 2020, albeit with more responsibility as one of the older players in the side.

“It is stressful a little bit, because you’ve got the younger boys looking up to you,” Gay said. “I’m just keen to get out there, get on the park and hopefully play some good footy again and see how we go.”

Being a member of the AFL National Academy Vic Country hub – along with teammate Will Bravo – Gay said the experience of training with “so much talent” was unbelievable.

“Yeah for sure (it was great for development),” he said. “You don’t get that much talent at all (in one place), so having a week or two with them, just learning off the coaches there who have got a lot of knowledge, just getting to know them as well. “Come to these testing days you get to come say hello too.”

Getting to know the Vic Country players better, Gay said he was excited to play alongside a promising key forward at the National Under 18 Championships, and named a teammate he thought will shine in a more preferred position this season.

“Looking forward to playing alongside Jamarra (Ugle-Hagan) in Vic Country, I think he’ll have a pretty strong year,” he said. “Then Stingrays, looking forward to seeing Bayleigh Welsh. “I think he played a bit out of position last year and I think he hopefully gets some more mid time this year and hopefully see him develop a lot throughout the year.”

When Draft Central chatted to Dandenong Stingrays Talent Manger Darren Flanigan, he said Gay would likely start behind the ball where he had been very impressive in 2019, though had the capacity to play in other positions as well. For Gay himself, he thought the back 50 was the best spot for him, but he was happy to play anywhere.

“It depends,” Gay said. “At the start of preseason, fitness wasn’t that up to scratch, so probably forward. “But now I feel like I’ve improved my running and endurance, hopefully just being able to play on my player and stick with him all line in the backline, so backline I reckon.”

Now it is just a waiting game to see if Gay and the Dandenong Stingrays can indeed get out on the park and begin the 2020 NAB League Boys season.