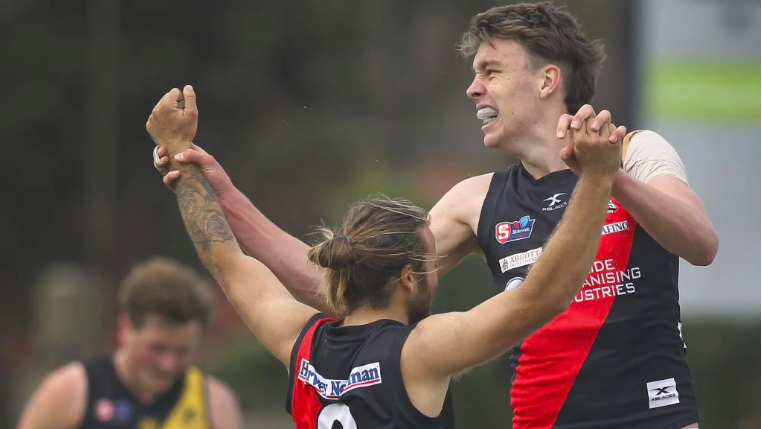 WEST ADELAIDE is set to boast one of the more exciting Under 18 one-two combinations in 2020, with State Academy members Riley Thilthorpe and Bailey Chamberlain looking to crack through the SANFL grades alongside fellow hub representative, Jye Sinderberry – should football return this year, of course.

Draft Central was lucky enough to gain access to South Australia’s pre-season testing day hosted by Rookie Me, speaking to Thilthorpe, Chamberlain, and Under-16 jet, Tyson Coe at the event. Get to know all about the trio; from their favourite teammates, to their on-field strengths and improvements, and 2020 goals.

A versatile and athletic tall with incredible running power, Thilthorpe’s raw talent has seen him thrown into the potential number one pick conversation. While he may have endured an injury interrupted bottom-age year, his form at the 2018 Under 16 carnival and ability to crack West Adelaide’s League side prove his worth. Getting on the park consistently was one of the bigman’s goals coming into his top-age season, building on promising showings thus far.

Chamberlain, a lightning fast midfielder who balances his inside and outside game well, was a player looking forward to benefitting from Thilthorpe’s ruck craft this season across multiple teams. While the 177cm prospect was not a part of South Australia’s carnival-winning Under 16 squad with Thilthorpe, he has developed well since and starred in the State’s Under 17 Futures game, as well as in last year’s Under 17 All Star showcase.

One to watch for the future will be Coe, who comes into his top-age Under 16 year having already featured for South Australia at the level last year. A powerful inside midfielder who loves the tough stuff, Coe had already turned out dominant performances for the Bloods in the Under 16 season before the unfortunate postponement. Should the Under 16 national championships go ahead this year, he will again be one to watch.

CHAMBERLAIN, THILTHORPE AND COE ON…

Chamberlain – “It’s (been) pretty chill so far, just trying to work through some PBs (personal bests) and getting around my teammates, getting through. “I’m definitely trying to improve on my 20m (sprint) and my agility just to make them elite. I reckon that’s a key aspect of my game so if I can get them elite, I’ll become a better player.”

Thilthorpe – Did not test.

Coe – “I did alright, I warmed up pretty well but unfortunately couldn’t do the yo-yo test because of a previous calf injury but besides that I got through the rest of the day pretty well. “The pre-season’s been good, I’ve been hitting the track pretty hard, trying to get a leadership role out there at the Under 16s but unfortunately had a few weeks out with a calf injury.”

Chamberlain – “Just trying to push for a League game really. I’ve just been working as hard as I can to try and push into that selection so hopefully I can play some good footy in the Reserves and then get the call-up… definitely (playing State Under 18s) is my major goal this year, just to play the champs, play every game and play well.”

Thilthorpe – “I just want to continue with more of the same I guess. More League footy, that’d be the dream and a good state champs this year – hopefully take it out.”

Coe – “Just trying to keep up with the bigger boys, learning from them. They’ve been through it themselves so just looking up to them (and) trying to be a leader for my own age has definitely been one of my specific goals this year.”

Chamberlain – “My ability to play both inside and outside. I reckon I’m a pretty versatile player in the midfield, I can play that winger role or play an inside role.”

Thilthorpe – “My marking and athleticism, they’ve sort of gotten me where I am now.”

Coe – “My personal strengths would be the shorter, more powerful stuff like the vertical and the 20m sprint. On the field, just the explosive stuff – more just the powerful tackles and stuff like that, I don’t mind that.”

Chamberlain – “I’m a pretty quick player so when I can get out the pack, just setting myself and hitting my kicks a bit more. I’m a bit inconsistent when I’m at full pace so I’ve just got to slow it down a little bit and take my time.”

Thilthorpe – “Over the pre-season my speed and agility have been big ones of mine so I’ve been working hard on that… my body wasn’t right last year obviously I missed a lot of games so getting my body right and just playing a consistent year is probably the main one.”

Coe – “Overall probably playing through the midfield, just the fitness. Although, unfortunately getting injured in the pre-season didn’t help out too much. But just working that fitness up to try and be an elite midfielder through the State program this year, we’ll see how it goes.”

Chamberlain – “Definitely Riley (Thilthorpe). We’re best mates so it’s pretty good running out next to him. Taj Schofield obviously, I go to school with him so I’m pretty close with him – those are the two main ones.”

Thilthorpe – “A lot of the boys are so good. Like Luke Edwards, just his IQ is unbelievable playing with him is amazing. Bailey Chamberlain, his speed… he’s one of my good mates, he’ll have a good year I reckon.”

Coe – “Getting the experience as an under-ager in the State 16s (under) a few good leaders in Jason Horne, Matty Roberts, and Murls (Cooper Murley). Playing through the midfield with those guys, it was a pretty elite standard and we obviously didn’t get the end result we wanted on the Gold Coast but still the experience is what counted for me.”