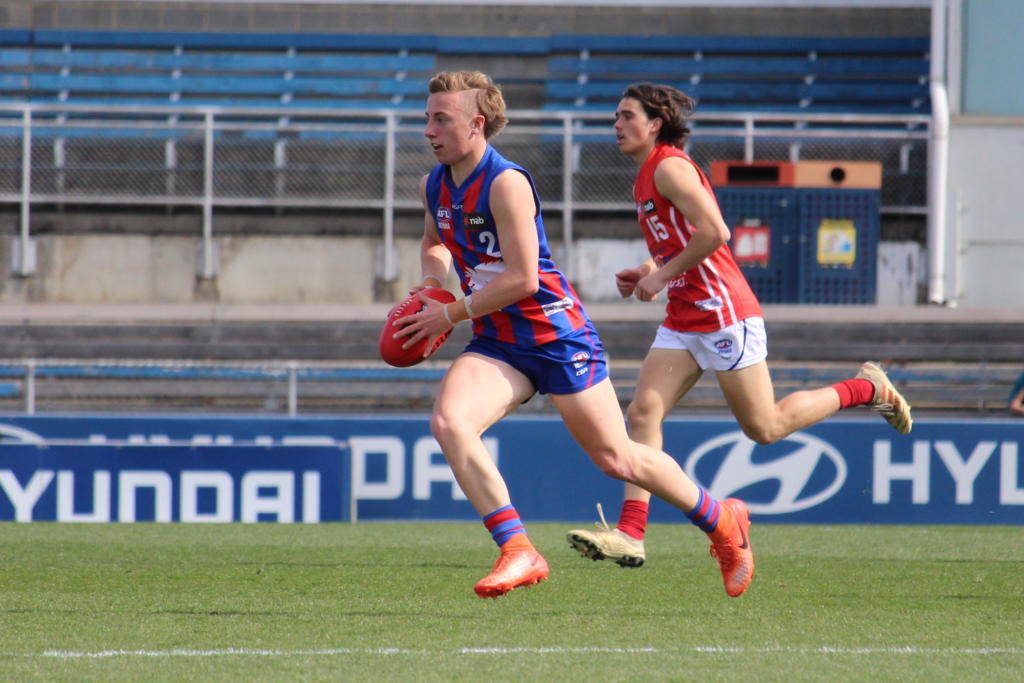 OAKLEIGH Chargers’ Bailey Laurie might be in a similar position to every other aspiring AFL footballer out there given the COVID-19 pandemic at the moment, but the Vic Metro hub member is thankful for his bottom-age year. Despite the season being delayed for 2020 thus far and uncertain if and when it might recommence, Laurie said playing with the likes of top two picks, Matt Rowell and Noah Anderson, and led by fellow draftees, Trent Bianco and Dylan Williams was a huge boost for any developing player.

“Yeah 100 per cent (it helps your development),” he said. You can learn so much at training and stuff, and all those guys are really good blokes so you can always have a chat with them and pick their brains a little bit. “Last year helped me a lot. “Going through the preseason this year with them has made it all a lot easier. “I feel a lot more confident, having experienced what I did last year with all those other boys, so I’ve been pretty grateful for that.”

Speaking to Draft Central at the NAB League Fitness Testing Day hosted by Rookie Me in the preseason, Laurie said agility is one of his greatest athletic strengths and said he enjoyed the day.

“Yeah it’s been pretty interesting,” he said. “It’s always good to see where you’re at I guess and see your mates from other clubs, but I’ve enjoyed it. “I think agility is probably my strongest one. “I was happy with how I went in that.”

Given the amount of talent onball, it was hard for the talented Charger to squeeze into the midfield consistently, instead playing forward and looking ultra impressive in the finals series. On NAB League Boys Grand Final day, Laurie had 17 disposals, five marks, four tackles, six inside 50s and two goals in a role that might have been overshadowed by the antics of Rowell – who racked up a lazy 44 touches and 12 clearances – but was still valuable nonetheless. It was not a one-off either, having had 17 touches the week before, and 16 and two goals in the first final. When asked if he was looking forward to more midfield minutes now that top-age group had moved on, Laurie said he was happy to play anywhere on the field.

“I’m not too fussed, whatever the coaches want,” Laurie said. “Obviously I’d probably want to go in there a little bit, but we play our role for the team. “If my role is forward then that is where I’ll be. “I just enjoy wherever, I just enjoy footy.”

Laurie finished the season with seven games to his name last year, averaging almost a goal a game as well as 15.3 disposals, 3.1 marks, 3.6 tackles, 2.6 inside 50s and 1.9 rebounds. It earned him a place in the Vic Metro hub, where he was able to train alongside some of Victoria’s top talents for the 2020 AFL Draft. Of those talents, there were a couple Laurie hoped to don the ‘Big V’ with at the AFL Under-18 National Championships.

“Connor Downie, I’m pretty good mates with him outside of footy so hopefully I can play alongside him,” he said. “There’s other boys like Jackson Cardillo from Calder. “All of them are really good blokes, and really good players obviously, so yeah can’t wait to hopefully get out there with them.”

While any goals in the current climate are difficult to achieve, Laurie was just hoping to improve and take his game to the highest possible level.

“Obviously just make the good teams I guess,” Laurie said. “Just try and be at my best, and hopefully I can do that if I work hard enough.”