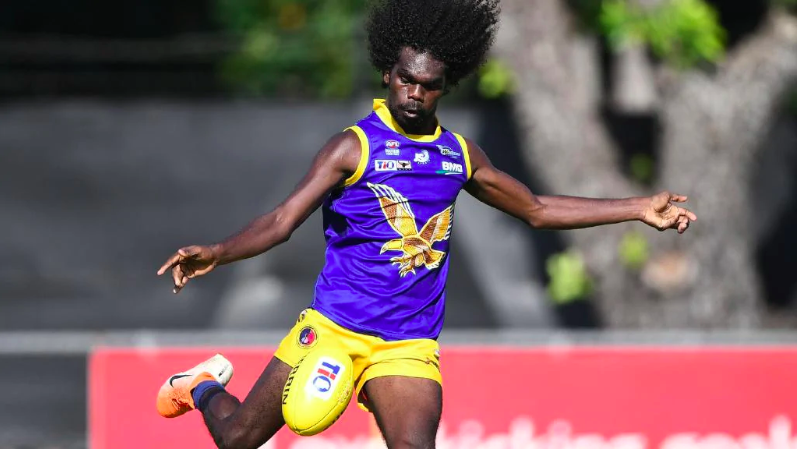 THE next team under review in our club-by-club Northern Territory Football League (NTFL) Men’s Premier League recap is Wanderers, which boasts a squad packed with young talent, but could only muster up enough points for seventh place.

After a promising first six rounds saw the Muk Muks collect all of their 14 Premier League premiership points, the largely inexperienced team struggled to put together its best football for long enough to stay in games, and embarked on a 12-game losing run to end the year. Rubbing salt to the wound, Wanderers was also the only side this season to lose to wooden spooner, Palmerston.

But with a massive 65 players flowing through the top flight lineup and the shining light of Beau O’Connell claiming the Nichols Medal at just 18 years of age, there is plenty for Eagles fans to look forward to should its young core continue to thrive at the club. Relive the highs and lows of Wanderers’ 2019/20 season, and revel in some of the standout individual performers.

Arguably the youngster garnering the most attention draft wise out of the entire NT talent pool is Joel Jeffrey, a high marking utility who staked his claim as a key forward this season for Wanderers. Possessing clean hands overhead and crafty skills at ground level, Jeffrey plays somewhat above his 189cm height in that forward role. While he would often be seen presenting an option further afield, the 18-year-old was the Muk Muks’ most productive asset closer to goal as well, booting 29 goals in 13 games. He was held goalless just once in those outings, and managed a season-high tally of five goals twice. With a ton of upside, hopefully Jeffrey can continue to progress.

Now considered one of the experienced heads in Wanderers’ engine room at just 25 years of age, Braedon McLean once again proved to be his side’s most important engine room cog across 17 Premier League games this season. McLean’s energy and driving work from midfield made him one of the more eye-catching players in the league this year, able to turn games in Wanderers’ favour with bursts of brilliance. His clearance work at just 178cm is terrific and clean, while his decision making brought poise to an inexperienced team most weeks. As he continues to become one of the competition’s premier midfielders, he will remain Wanderers’ most valuable player.

Winning a senior league best and fairest at just 18 years old is no mean feat, and that is exactly what Beau O’Connell pulled off in a remarkable season of Premier League football. The diminutive midfielder stands out with his pace and class in possession, able to break the lines and wreak damage going forward with piercing kicks. O’Connell’s ability to find the big sticks also helped him to garner votes as he was clearly unharmed in that sense by Wanderers’ wealth of losses, consistently standing up as the Muk Muks’ best performer. He is a youngster who is confident in his ability and while he may seem quiet, is a real driver of standards in any group he joins. Having already represented the NT Thunder at Under 18 and senior level, the future is bright for O’Connell.

There is an almost endless amount of correct answers for this slot among Wanderers’ squad – see Jeffrey, O’Connell, Tyrrell Lui, and co., but we’re going with Dray Thompson as the Muk Muks’ rising star. Another 18-year-old talent, Thompson is also a talented soccer player credit to his speed, and used just that in his role on the wing this year. Able to light up the field going both ways, the youngster earned a Round 16 Rising Star nomination this season, and was a key member of the Eagles’ team in 15 appearances with his defensive work impressive coaching staff at Wanderers. While others like Jeffrey and Lui may attract greater plaudits at times, Thompson has just as many runs on the board after a terrific season at senior level.

Wanderers was right among the top five early in the NTFL season, with this win over eventual finalist, Tiwi arguably the Eagles’ best out of their total three. Joel Jeffrey was among three Eagles to boot two goals, playing alongside brother Jai, while Braedon McLean shouldered the midfield load with Beau O’Connell absent. Running out the game strongly after trailing was also a good sign of character for the team, but is something it lacked in the back half of the year.

While this may not be the heaviest loss Wanderers suffered among its string of 12 to end the year, it stands as arguably the most disappointing given the opposition. The defeat saw the Eagles finish the season as the only team to have lost to Palmerston, although there were still some great positives to take out of the game, not the result. Joel Jeffrey again starred with four majors, while Beau O’Connell was best afield with his three majors. Making up the spine of the future, those two young guns had plenty to do on the day.