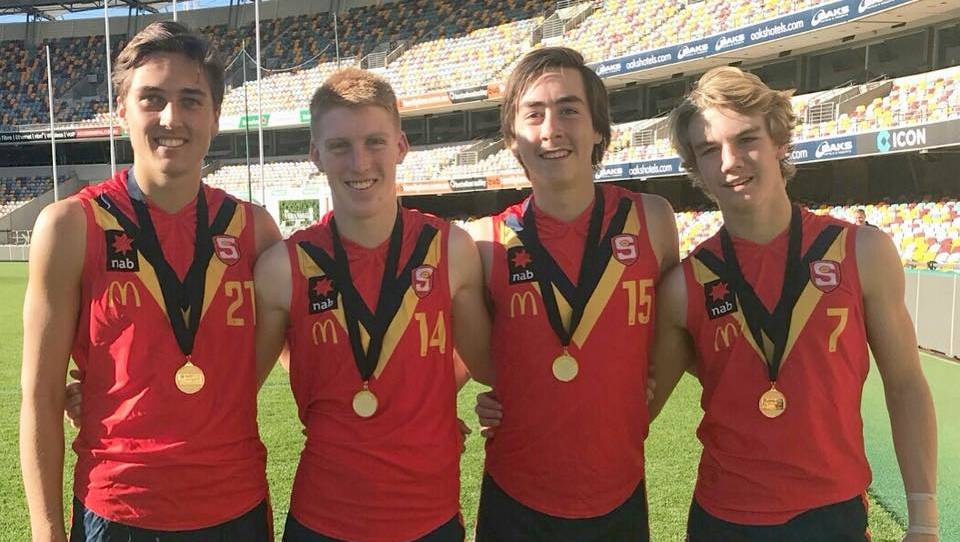 SOUTH ADELAIDE lay claim to one of the more promising SANFL Under 18 lists this year, with five South Australian Academy Hub members onboard for season 2020. Luckily enough, Draft Central was granted access at the state pre-season testing day hosted by Rookie Me in February, and spoke to two of those hub prospects in Zac Dumesny and Jason Horne. In our latest edition of Get to Know, we bring you an insight into the mindset of these two top and bottom-age guns just prior to the would-be start of their season.

Dumesny, one of two top-age Panthers in the state squad, has plied his trade in a number of big games over the past few seasons. The dynamic, intercept marking utility was a representative in SA’s Under 16 title-winning campaign in 2018, he played a key role in the Panthers’ 2019 SANFL Under 18 grand final loss, and was later selected in both National and State Under-17 Futures All Star games. It stands as quite the resume for Dumesny, who looks primed to become more of a leader in the State Under 18 squad after already earning his first cap in the side as a bottom-ager.

A teammate of Dumesny in the 2018 State Under 16 side was Horne, who skippered the Croweaters during their 2019 carnival en-route to earning his side’s MVP award. The tenacious inside midfielder also possesses great overhead marking and a happy knack for finding the big sticks, which put him in good stead to take on opponents above his age group for stints of his journey so far. Horne was also a part of South Adelaide’s 2019 Under 18 team, and is looking for a berth in the State squad following his back-to-back Under 16 campaigns. Without further ado, get to know the two talented youngsters, in their own words.

Horne – “Testing’s pretty good, it’s good to get all the clubs here and active all together – doing all the good things at once… (the goal has been) probably just to get fitter so the yo-yo, I’ll make sure I do really good in that.”

Dumesny – “(Testing)’s been alright. “I mean, a bit nerve-wracking but we’re getting there – onto the last one now… I wouldn’t say I’ve got too many good traits but I think I’m improving as I go, so it’s been good.”

JOURNEYS IN THE SA STATE SYSTEM:

Horne – “It’s pretty good, I’ve had good people alongside me to help me like my dad and my mum – all their support. My journey’s been pretty good; it’s been fun, it’s been enjoyable.”

Dumesny – “It’s really good. “Obviously being there since last year, this year means I’ll try and be a bit more of a leader, just try and be more vocal and give a bit more feedback. “But it’s been really good, (with) a great group of boys as well.”

Horne – “Probably my marking (and) my contested footy, just the competitiveness to want to win and not lose.”

Dumesny – “My athleticism and jumping, I think that’s important. I’m not the quickest player but I try and just implement quick skills on the ground.”

Horne – “My skills are one thing, you always want to improve your skills, but also my leadership on-field – just making sure I’m keeping everyone in-line and keeping all the boys together.”

Dumesny – “On-field I think just my clean skills at ground level. Also one-on-one marking and just being a bit stronger in the contest – that’s been a big focus this pre-season, I’m in the gym a bit more.”

Horne – “Yeah, I feel like the midfield is where I really excel in.””

Dumesny – “I think I’ll hopefully be playing half-back and the wing rotation. Hopefully I can (also) play a few games up at senior level as well and crack the League team and play on a wing.”

Horne – “Probably just to be the best footy player I can be and hopefully this year to play some senior games, play some of the State 18s games if I can get a game in that. Those are really my goals for this year.”

Dumesny – “I think (playing League games). “Obviously the main goal is to be drafted but you have to break it down into little goals through the year.”