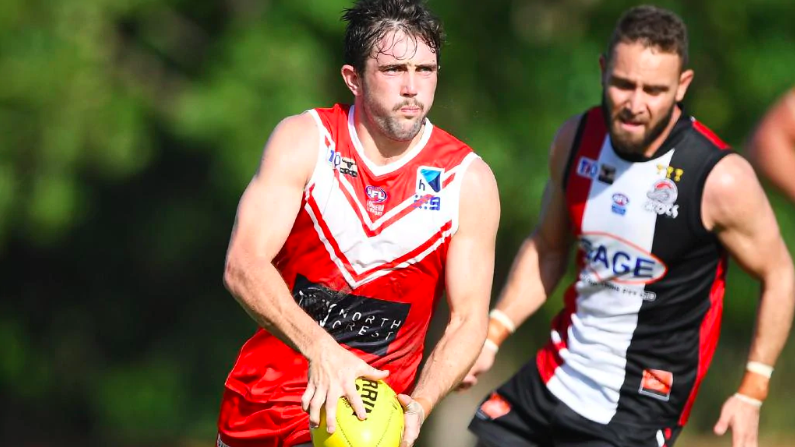 THE next team under review in our club-by-club Northern Territory Football League (NTFL) Men’s Premier League recap is Waratah, the best of the rest having finished sixth in a turbulent 2019/20 campaign.

In a season where the Warriors struggled to maintain any real consistency despite flashes of their best footy, an incredible 56 players were tried in their top flight team, with much of the best Tahs’ talent missing games throughout the year. There were high hopes for Waratah coming into the year after a promising 2018/19 showing, but finals aspirations were not to be with the gap to the top five ending at a sizeable 20 points (five wins).

Relive the highs and lows of the Warriors’ season, with a special mention for the standouts and key individual performers among a squad stacked with promising home-grown talent, and one particularly renowned NT star.

In a season where consistency was hard to come by for Tahs, Kantilla proved a reliable outlet for his side moving forward of centre. While that consistency is not a trait often attributed to players of Kantilla’s dashing and X-factor-filled style, the small forward managed to set the Premier League alight with his highlight reel. His 22 goals across 16 games were important, with a mid-season run of three, six, and five-goal hauls arguably the shining light of an awesome individual year. Linking up with the likes of Henry Kerinaiua and Jae McGrath in the midfield-forward rotation, Kantilla made Waratah a fun team to watch at times.

One of the competition’s premier midfielders is Abe Ankers, who was nothing short of his impactful self during an interrupted seven-game season. The NT Thunder representative further proved his class in averaging over two goals and Nichols Medal votes per game, so it was no wonder to see how sorely missed his presence was for this Waratah side this year. Proving as much, Ankers featured in four of Tahs’ five wins and booted 10 goals across those games, while also adding a bag of five in the Warriors’ early-season loss to Wanderers. He is easily Waratah’s most valuable player, and it is no surprise to see him poll so well each year.

The 18-year-old really came into his own this year in his first real tilt at a full season of senior football, accumulating 11 appearances in 2019/20. Coming off a year where he represented the NT Thunder at Under-18 level, Minkulk transitioned well into the Warriors’ Premier League side with a role on the half-forward line to create and apply pressure. While he only found the goals twice this year in seperate outings, the youngster impressed with his ability to shut down opposition rebounds and help keep the ball locked into Waratah’s forward half. Should turn into a mainstay with time.

In a high-scoring contest, the Warriors were at their absolute best against a side which proved more than capable of booting similarly big scores. This was not quite Waratah’s biggest total of the season, but it was a huge effort, albeit against an undermanned Tiwi, with a number of big names firing. Ex-VFL sharpshooter Steve Stroobants was the star with six goals, while regular suspects Henry Kerinaiua, Kim Kantilla, and Abe Ankers also all claimed multiple goals. This was the best of Waratah, and what fans would have expected more of coming into the season.

There is no shame in falling to St Mary’s given its outstanding year, but this was a feeble showing from the outgunned Warriors, falling to their biggest defeat of the season just a fortnight after two massive consecutive wins – including the above. No surprise to see Henry Kerinaiua and Kim Kantilla again on the scoresheet, but the absence of Abe Ankers, Brodie Carroll, Nicholas Gooch, and Tim Mosquito proved telling. That was the story of much of Waratah’s campaign, headlined by this loss.