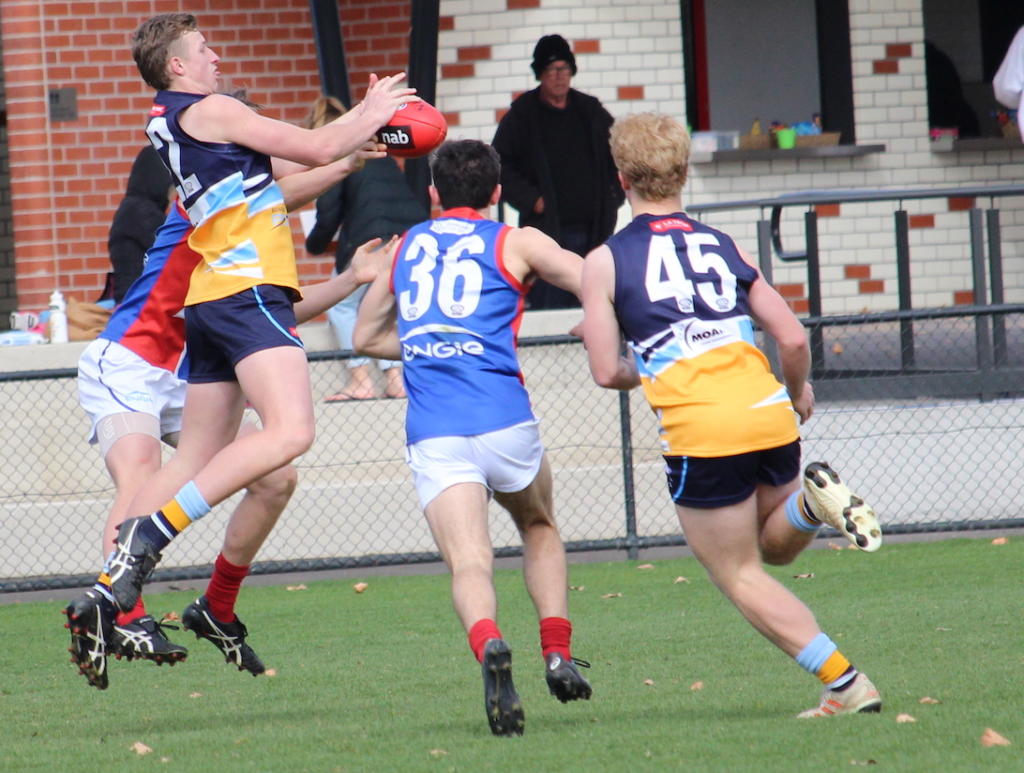 BENDIGO Pioneers’ tall, Josh Treacy is eyeing off more time up the ground – when he can finally get onto it. First it was a hamstring strain that occurred in a preseason practice match forcing the forward out of testing at the NAB League Fitness Testing Day hosted by Rookie Me, and then it was the more widespread COVID-19 threat that has delayed he, and all other footballers’, seasons.

When asked if he could lock down a key position forward role in 2020, he said he felt like he could, but he’d “love to push up the ground and get amongst the footy a bit more”. He experienced that in patches for the Pioneers in his bottom-age year in 2019, believing his season was “pretty consistent” and one to build on.

“Yeah I think it was pretty consistent,” he said. “It obviously took me a few weeks to find my feet. “Once I got going I felt really good and yeah finished off the year pretty good.”

While Treacy was not to know about the global pandemic that would threaten the entire competition, the talented Vic Country hub member said his hamstring injury came at the worst time on the eve of the season. Though it was a setback and meant he was unable to complete testing, the Pioneers’ top-ager said he was looking to work on other areas of his profile outside of on-field traits.

“Just a little bit of a hamstring strain I did in the practice match last week, which is a little bit disappointing, but it’s just a little hurdle in the road,” Treacy said. “But we deal with that and come back bigger and stronger.”

The injury was a real disappointment for Treacy, who described his pre-season as “massive” and had felt “on top of (his) game and ready to crack into things”, but conceded that the injury was just put down to “things happen”. While everyone is now in the same boat, injured or not, Treacy has the advantage of having played amongst the best in the country on AFL Grand Final Day in 2019 for the Under-17 Futures match.

“(It was) really exciting,” Treacy said. “We played amongst the best boys in the country and made some very good mates out of it. “It’s probably a really good taste of what it’s going to take.”

Treacy said there was no shortage of players who he enjoyed playing alongside in the match, and from Vic Country, who were – prior to the postponement at least – primed for a big year in 2020.

“There’s plenty of them,” he said. “A few boys have gone out with injury, but definitely the likes of Jamarra (Ugle-Hagan), and Tanner Bruhn. “There’s a heap I could name who are in for a big year I reckon.”

Treacy also said he had faith in his NAB League Boys club going “very deep” in the finals series, believing the team had the top end quality to have a “pretty big year”. While his ultimate goal is to be drafted, Treacy admitted he was just taking it – as the cliche goes – one week at a time and keep ticking the boxes that were within his control.

If and when the NAB League season does recommence, expect the Bendigo marking forward to be as hungry as ever to impress as he strives towards his draft dream.