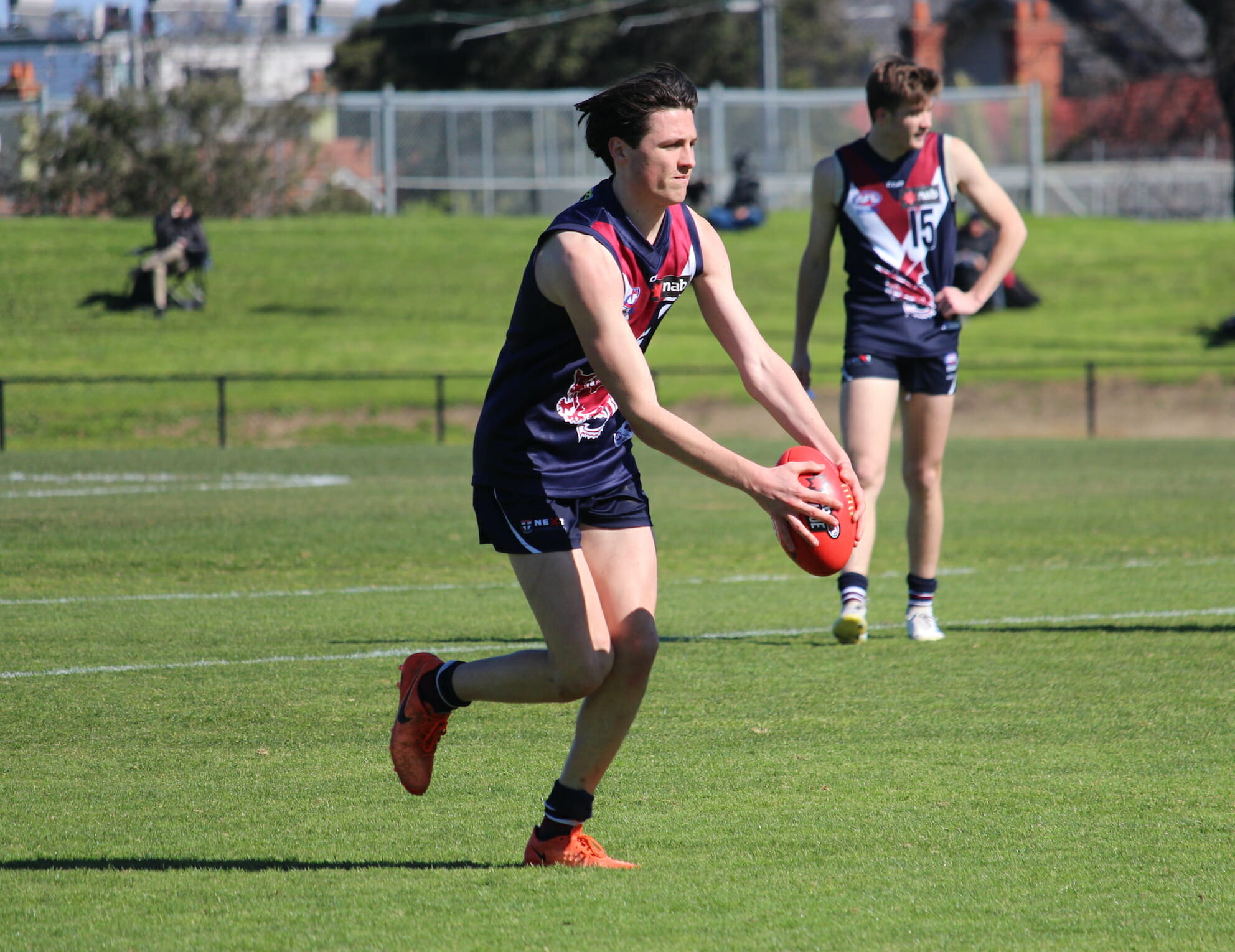 ONE of the more unlucky players not to have his name read out at the 2019 AFL Drafts was Darcy Chirgwin whose run with injuries over the past couple of years has been frustrating, but one he hopes to turn around in 2020. The former Sandringham Dragons player – who moved to take up his schooling at Melbourne Grammar – has returned home to the Geelong Falcons where he played his football up until his bottom-age year in 2018.

“I was an Under 15s and Under 16s at the Falcons and loved my time there,” Chirgwin said. “Obviously moved schools to Melbourne Grammar and had to move to Sandy which was a bit unfortunate in the sense that all my mates were down playing at the Falcons. “I loved my time at the Dragons, but yeah happy to be back at the Falcons with ‘Critch’ (Matt Critchley, high performance manager) and ‘Daf’ (Luke Daffy, senior coach) and Mick (Turner, Talent Manager). “They’ve all been really good to me, loving it.”

Chirgwin knows that his year might have turned out differently in 2019, had it not been for a serious leg injury early in the year which left him sidelined for the first half of the season and only managing one game – albeit a brief stint – in the AFL Under 18s Championships.

“It’s not ideal,” Chirgwin said. “Especially in the start of my draft year going in as a top-ager and Year 12 for school as well. “Yeah sort of snapping my leg and dislocating my ankle wasn’t a great way to start the year, but you sort of push through it and it gives me a chance as a 19-year-old to push my claims again at the end of this year.”

The over-ager has had so much bad luck, that unlike many other athletes who might bemoan having to run a series of gruelling fitness tests over preseason, enjoyed being able to compete. That was the case at this year’s NAB League Fitness Testing Day hosted by Rookie Me, where he sat down with Draft Central to talk about his journey.

“I actually haven’t (tested), I’ve been injured the last few years,” Chirgwin said. “It’s been good, this time last year I was on crutches so yeah it’s actually good to be here with the boys and testing. “Whether it’s actually with the Falcons this year, it’s great, I’m loving it, happy to be back.”

Aside from the injuries that would have worried some clubs about his durability, Chirgwin said there were also on-field areas he had to work on and that was what he was keen to do in 2020.

“There’s definitely parts of the game I need to improve,” he said. “As I said coming back here, it gives me a chance to do that with the Falcons program and a full season would be nice this year. “Fingers crossed, touch wood I get to stay on the track for the full year, definitely. “But it’s also I’ve got other things to work on.”

Having returned to the Falcons after two years away, Chirgwin said it was “definitely” a bit like having a fresh list to get accustomed to, though he recognised some familiar faces from his time there.

“Obviously a few of the boys went to my old school back at St Joeys when I was in Year 10, so I know them pretty well,” he said. “As an older boy you’ve got to lead the way and the Falcons haven’t been too successful the last couple of years and playing at the Dragons, we played in finals both years, so they’re probably not too experienced in that regard, especially if we’re going to play finals at the end of this year.”

Chirgwin knows the difference all too well, playing in the Dragons’ 103-point smashing of the Falcons in Wildcard Round last year. In that win, Chirgwin had 27 disposals, four marks, five clearances, four inside 50s, six tackles and a goal, running at 50 per cent contested as one of the key engine room movers for the winners. Asked if the Geelong boys were giving him “stick” given their close ties to the region, Chirgwin said it was quite the opposite.

“Oh nah I’m giving them stick about that, I reckon,” he laughed. ‘It was a bit unfortunate, they had a heap of bottom-agers and boys that will be playing with us this year so it’s a good experience for them. “I think they’ll be better for it.”

While the elephant in the room is the uncertainty about how much the NAB League Boys and Under 18 Championships will be impacted by the global pandemic of COVID-19 currently plaguing the country, Chirgwin will leave no stone unturned to try and chase his AFL draft dream.

“I wasn’t really able to play Country with the leg, and I only really got one game,” he said. “I know if form warrants I can get back in the side, so hopefully fingers crossed I get a kick at the start of the year and that happens. “We’ll just wait and see, I’m only worried about playing Falcons (first game) at the moment.”