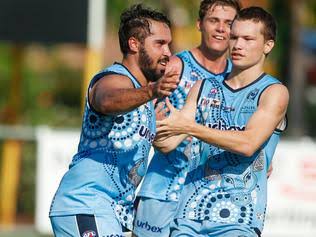 THE next team under review in our club-by-club Northern Territory Football League (NTFL) Men’s Premier League recap is Darwin, who qualified for a fifth-straight finals berth in a season made up of ebbs and flows. The Buffaloes won every game expected of them as a top five unit, not once dropping points to the bottom three teams, but struggled to get going against those above them – going 2-8 against the remaining finalists. With a squad which boasts some hardened veterans and notable experience, the Double Blues are perennial Premier League contenders, but could not quite put the right form together for long enough, bowing out in the first week of finals.

A rare key forward type who came back in a big way, the mercurial Stafford was a true spearhead in 2019/20 for Darwin. Booting 39 goals in just 13 games, the mobile bigman almost doubled the next-best Buff in that regard, and was as reliable as they come in front of goal. Able to beat opponents in the air or at ground level, Stafford embarked on an incredible stretch of games where he found the big sticks in each, while also being held goalless just once across the season. His ability to boot big bags of goals made him an invaluable part of the Darwin lineup, taking games away from opponents.

The skipper is a leader in every sense of the word; through example in his hardness at the ball and unrelenting effort, as well as his undeniable skill. Stokes endured a slightly interrupted season – particularly in the back half – but still managed to lead his side out in 15 games and put in some big shifts. The midfielder/forward is still as evasive as ever and has the nous inside 50 to find the goals, doing so 12 times across the season. With plenty of support in the leadership and organisational stakes, Stokes continues to be able to let his own game shine and provide the heartbeat to Darwin’s efforts.

Eldridge’s return to football was a timely one for Darwin, and the utility showed incredible courage to put in such a great season having come off a serious spinal injury which ruled him out for much of 2018/19. Settling into the side early in more of a forward role, Eldridge hit the scoreboard in his first four outings, before continuing to display his typical run and raw forward creativity to play out 17 games in total. The talented Buff is maturing into a reliable player, and clearly proved his status as a key part of Darwin’s setup in 2019/20.

A member of the NT Thunder’s Under-16 squad during last year’s national carnival, Seden-Kurnoth took to his first full year of senior football with aplomb, impressing across 17 games for the Buffs. The talented midfielder was named best afield four times for Darwin, such is his quality, with much of his best form coming in the middle of the year. Coming into his bottom-age draft year, Seden-Kurnoth may well have his sights set on Under 18 selection for the Thunder, with another year of senior representation ahead of him either way having earned his way into Darwin’s starting line-up.

Quite the way to begin any season, Darwin’s 113-point thrashing of Tiwi was ominous. An incredible 12 goals to livewire Adam Sambono set tongues wagging for the Buffs, but he would only feature twice more for the year. Skipper Bradley Stokes started off on the right foot with a best afield performance, with the experience of Joe Anderson and Christopher Williams also contributing massively to the big win.

While Darwin’s season might have began in a blaze of glory, it finished with barely any form of resistance. It may have simply been a case of running into Southern Districts at the wrong time, but the Buffs hardly got going on a disappointing day to fall comfortable losers to the Crocs. Daniel Stafford was still able to find multiple goals though, in one of few highlights for the game.