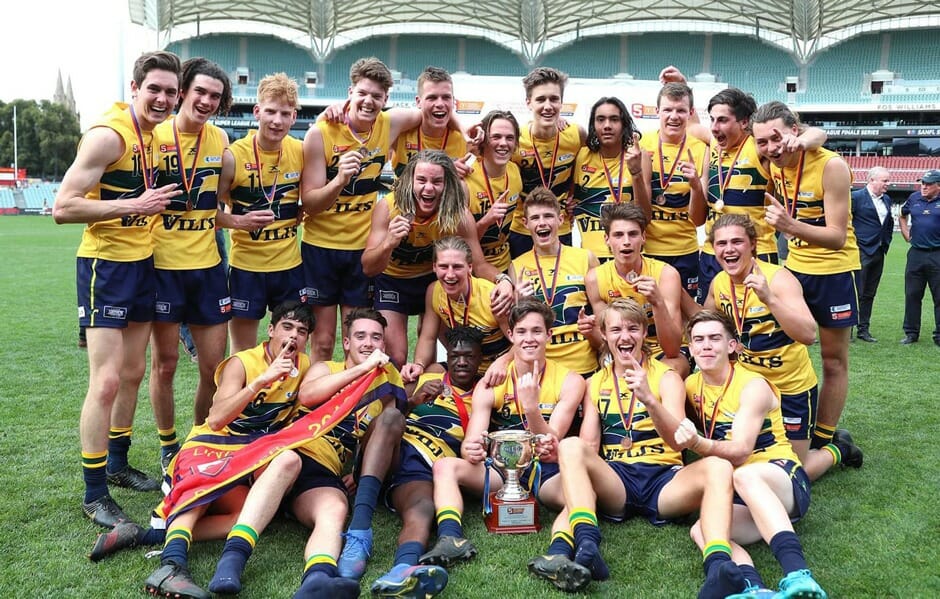 WOODVILLE-WEST TORRENS lays claim to a couple of exciting potential Port Adelaide father-son prospects eligible over the next two seasons, with Taj Schofield (Jarrad, 131 games) and Jase Burgoyne (Peter, 240) tied to the Alberton-based club. Both of their fathers were part of Port’s 2004 premiership side, making the link even more profound for either player and fans alike.

A top-ager this year, Schofield represented Western Australia – where he had lived for most of his life – at Under 16s level before transitioning to the South Australian state system as his father, Jarrad moved into a coaching role at Port Adelaide. The zippy small was part of the Croweaters’ State 18s squad last year and despite not yet running out in the tri-colours, is one of five Eagles to be part of the 2020 hub system. Schofield was part of the Eagles’ Under 18 premiership side last season, while also running out in the Under 17 All Star grand final curtain raiser, and playing part in Henley High’s losing tilt at the Open Schools Cup title.

Burgoyne, a smooth-moving outside midfielder, was also a member of the Eagles’ 2019 Under 18 premiership team and is looking to crack a Reserves debut in this, his bottom-age year. Having represented South Australia at last year’s Under 16 national carnival, there is plenty to like about Burgoyne – who currently sports a look similar to his old man. With all the experience of his champion father, uncle (Shaun, Hawthorn), and recently-rookied brother (Trent, Port Adelaide) to lean on, the latest Burgoyne on the scene has shown plenty of promise despite still being a raw prospect.

The pair spoke to Draft Central at this year’s South Australian pre-season testing day hosted by Rookie Me, on a bunch of topics ranging from their on-field roles, to goals, the importance of family in their journeys, and more. Get to know two of Woodville-West Torrens’ brightest draft prospects.

“It’s been pretty hard but I feel like I’m getting fit and all the boys are getting fit so hopefully it leads into a big year, it should be good.”

“I feel like I went alright in the agility (test) and hopefully I do good in the Yo-yo test, but we’ll see how we go… I’m a small player so those sort of tests (20m sprint and agility) do show my sort of game so it’s good.”

THE TRANSITION FROM WA TO SA:

“It’s been good. Obviously Dad got the role at Port Adelaide so we had to move over but all the boys have been really welcoming and it’s really helped my footy. Obviously the SA game-style is a little bit different to WA but it’s really developed my footy as well.”

DAD AS A MENTOR:

“He definitely is (an important mentor). He knows what he’s talking about and really helps me out when he can, but he tries to stay out of it a little bit now. But he’s really helped me and is really useful to me as well.”

“I think I’ll still roll through the midfield but also play that half-forward and wing position as well, so just changing it up a bit.”

“Probably just small things like making state teams and playing (well) week by week and hopefully the end-goal is to get drafted.”

“Yeah, I’m a Port fan… we’ll see what happens, we’ll make that decision during the year.”

“I started off a little slack like everyone else because we got here at 8:45am, but once we got into it, it started off pretty good for everyone and I think it’s gone well… I feel like I showed (my pace) in the 20m sprint (3.03 seconds) and the vertical jump (86cm running). I had a few shots so hopefully I got a good time.”

“I’d say my run-and-carry (are my strengths). I showcased that a little bit in the 16s, but in the 18s last year when I played up it wasn’t there. But hopefully I can come out and show a little bit of flair and x-factor.”

“Obviously my body-size, I’m a pretty skinny kid. And my contact and inside work, that’s the stuff I’m looking forward to.”

“Obviously it’s great, they give me insight into what it’s like to make the AFL and how hard it’s going to be. They pushed me hard to get where I am right now, so if I get there I can fit in perfectly and won’t have to do anything extra to try and fit in. So hopefully if I get there I’ll fit in fine.”

“This year I’m looking to maybe try and get a Reserves game, that’s the goal for me that I’ve set for myself so hopefully it’s the one that I can go ahead and accomplish.”