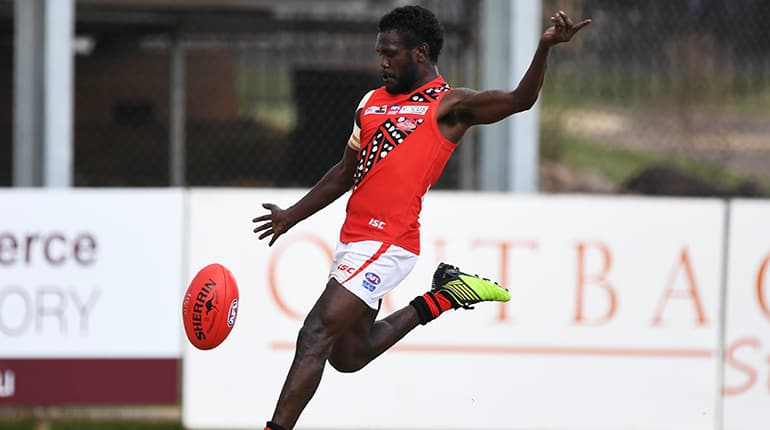 THE next team under review in our club-by-club Northern Territory Football League (NTFL) Men’s Premier League recap is Tiwi Bombers, who produced many a highlight throughout this year’s campaign. Renowned for their electric end-to-end style and pace on the outside, the Bombers were one of the more free-scoring sides of 2019/20 and caught plenty of eyes on the way to a third-consecutive finals berth.

In a boost for the club, favourite son Cyril Rioli Jnr made his long-awaited return to the Islands, suiting up and playing a key role in his side’s memorable Round 5 win over Palmerston, while gun midfielder Adam Tipungwuti is currently trying his hand at cracking the AFL at North Melbourne’s VFL side. Despite exiting finals in straight sets having scraped in for a double-chance, moments like these made Tiwi’s season a special one.

A Tiwi stalwart and mainstay in their dynamic forward line, Wonaeamirri was consistently the centrepiece of his side’s attacking efforts. The former Melbourne goalsneak is a reliable set shot and clever at ground level, making him a dependable option around goal. Wonaeamirri was held goalless just twice across 17 games this season, booting multiple goals on 12 occasions and embarking on a remarkable stretch of 11 games where he found the big sticks at least once. In his third-straight season of 30-plus goals, Wonaeamirri only confirmed his status as one of the premier goalkickers.

One of the key exponents of Tiwi’s run-and-gun style, Puruntatameri consolidated his standing as Tiwi’s finest player this year with a campaign good enough to earn a second-consecutive best and fairest nod. Much of Tiwi’s rebound and dash out of its own half was generated by the play-making defender, who was incredibly consistent in his equal team-high 18 appearances this season. Testament to his importance to the team, Puruntatameri was named among the best 14 times in 2019/20, including a streak of 10 games to begin the season which featured three best afield performances.

The former West Coast Eagles small did incredibly well to poll 12 votes in just six NTFL Premier League games in 2019/20, playing a key role in five regular season wins before standing tall in a disappointing semi final loss. The diminutive midfielder/forward transitioned well as he moved closer to goal later in the year, booting all of his eight goals in his last three outings for Tiwi – including a bag of four against Darwin in Round 15. Leaning on all of his AFL and WAFL experience, Hams was an integral part of the Bombers’ lineup when available, and gave it his all when picked.

An NT Thunder Under 16 representative in 2018 and Under 18 squad member last year, Simon made his mark on the Premier League this season, adding 17 senior games to the 19 he amassed previously. A multiple-time Rising Star nominee, the talent of Simon is known to all in the NT, and he continues to build on an impressive resume. Able to be utilised on any line and in multiple roles, Simon looks at home on the outside where he can use his clean skills and penetrating run to create forward opportunities for his side. Coming into his draft year, he may be one to watch.

This game was an absolute shootout, producing fireworks between two traditional rivals – in the right way – with an incredible display of attacking football. After two sizeable losses to open their season, not much was expected of the Bombers against the much-improved Saints, but they came out firing and held off St Mary’s late charge to win an all-time classic. The usual suspects all starred, with Jason Puruntatameri named best afield, while Ross Tungatalum and Austin Wonaeamirri each booted four goals. This was the game which proved what Tiwi was capable of.

Coming straight after such a team-lifting win against St Mary’s the previous week, this was such a disappointing way to back it up. In Tiwi’s first of just two losses to the eventual bottom three sides, a depleted Bombers lineup was outdone by the youthful and exciting Wanderers team. While the experience and class of Puruntatameri, Nathan Djerrkura, and Rodney Baird was there to steady the ship, the Muk Muks hit back strong after a slow opening term and held on for the surprise win. With a 1-3 start to the season, there were doubts over Tiwi’s credentials, which were quickly quashed.