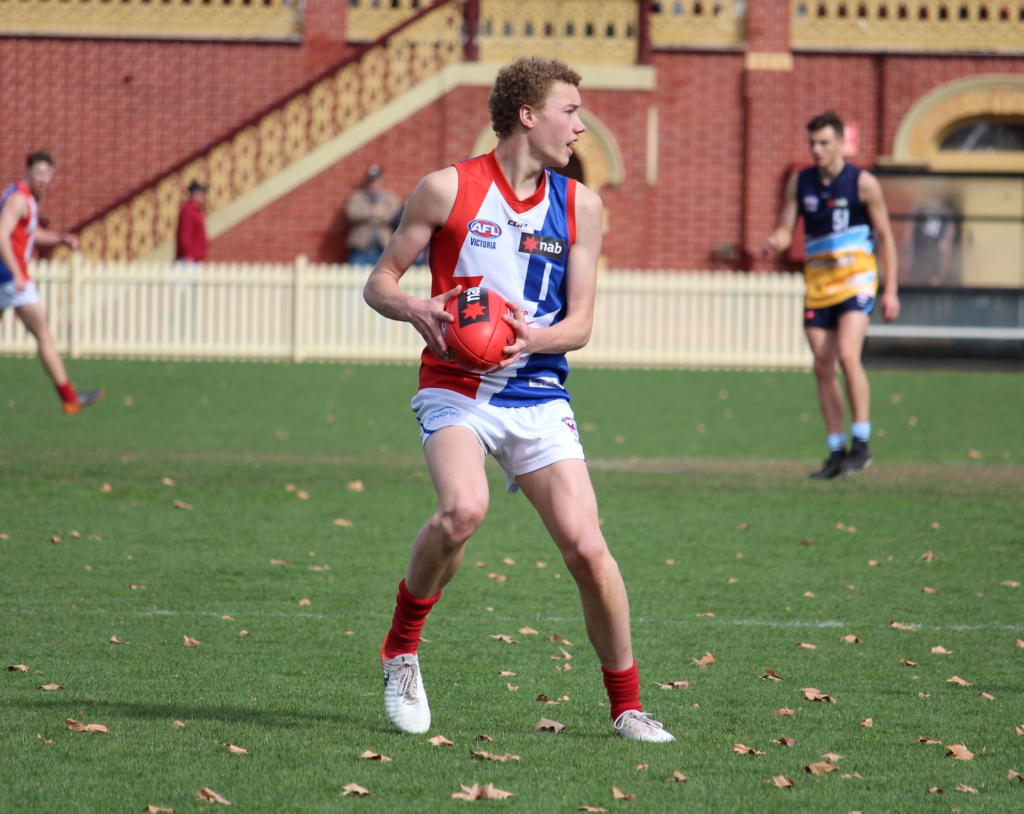 FOR many players, improvement could come from plenty of match fitness and repetition, but for players like Gippsland Power’s Ryan Angwin, there are plenty of positives to take from extended time out of the game. Angwin, like anyone else would be shattered at the fact he and his teammates cannot run out in the NAB League Boys competition for the time being, due to the COVID-19 pandemic, but the Vic Country hub member and talented winger knows what he has to improve on for 2020 and all of it can come with some dedicated off-field work.

“(I) definitely (want to) try to build some size,” the 181cm midfielder – who weighed in at just 62kg a year ago – said. “(I want to) get a bit more on the inside of the contest and hopefully improve my endurance a bit more and run up and down the ground all day.”

While putting it into practice might be a stretch considering the absence of competitive matches or large group training sessions for the time being, Angwin could use the time away from the game to work on those aspects individually. He has already added size to his frame over the past 12 months, and with endurance a noted area he wants to work on as well, some dedicated sessions at his local oval or even backyard during the current climate could have him return bigger and better than ever.

“It’s been fairly tough,” Angwin said of the preseason to Draft Central at the NAB League Fitness Testing Day hosted by Rookie Me. “But we’re here to all get better as a team. No matter what the result we’re all in it together, so it’s good.”

Angwin was a member of the successful Gippsland Power side that had a host of players drafted, and reached a preliminary final in the NAB League Boys competition last year. The midfielder said working alongside the likes of first round picks, Caleb Serong and Sam Flanders among others was a terrific experience for a bottom-ager such as himself.

“It was unreal,” Angwin said. “Playing with nine draftees, just been able to work with them all year, improve your skills every week. “Just been around that environment really helped set it up for the rest of the year.”

He also described his experience in the Vic Country hub as “unreal” to be able to run around with so many “elite guys” in the program. Angwin refused to narrow down just one or two players he hoped to run out alongside for Vic Country – should he make it, or more relevant, should the carnival go ahead – but instead just looked forward to being a part of another group of players all aiming to succeed.

Like any competitive person, the near-miss of 2019 burns brightly, and Angwin said there was one team he would like to square the ledger with after a heartbreaking qualifying final loss.

“Definitely Oakleigh after them winning the grand final by so much and us coming so close in that first final,” Angwin said. “You obviously want to get one back on them.”

Global pandemic pending, Angwin said his main goal was team-oriented and said he hoped the Power would make the finals again and have the best possible season which would assist in the players putting their best foot forward to be in the spotlight for drafting.