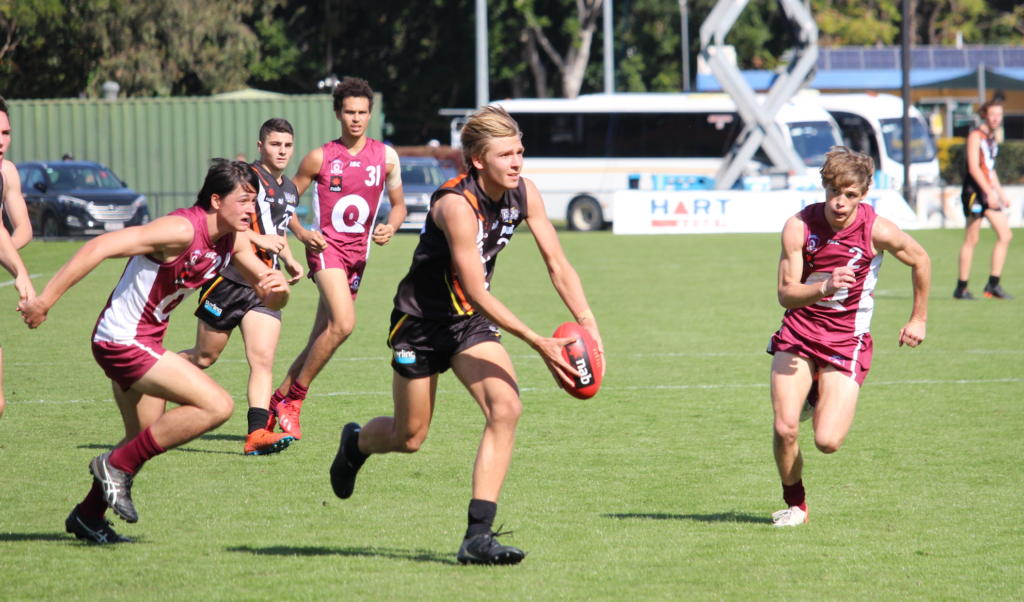 THE next team under review in our club-by-club Northern Territory Football League (NTFL) Men’s Premier League recap is gallant preliminary finalist, Southern Districts. Losers in the 2018/19 decider, the Crocs looked to again be in the premiership hunt after a tight Round 1 grand final rematch against Nightcliff, but struggled to capture their best form for consistent periods throughout the season. Arguably their best streak came at the ideal time though, with a string of three wins heading into the post-season putting Districts in perfect stead to notch two high-class finals wins. While they fell just short of a third-consecutive grand final berth to the eventual premier, the Crocs produced some terrific football when at their best.

With over double the goals tally of the next-best Croc (Ed Barlow, 25), Will Farrer thrived as his side’s spearhead in 2019/20 to finish as the league’s leading goalkicker. Farrer’s incredible run of finding the big sticks in all of his first 10 outings is testament to his consistency, being held goalless just twice in 19 games – against the top two sides, no less. The high-flying forward also booted more than three goals 11 times this year, making him a reliable figure for the Crocs in helping to take contests away from their opponents. His season-high haul of eight goals came against Palmerston in Round 16, just as Districts started to turn their form around.

The profound impact that both Farrer boys have on the Southern Districts side is no secret, and Josiah was arguably the centrepiece in 2019/20 as a mainstay in the lineup. The midfielder/forward was the only Croc to feature in every round this season, finding the goals in 15 outings to average almost one major per game. Farrer’s happy knack of getting on the board when resting forward, or bursting up the ground from midfield, made him one of the more impactful ball winners in the competition, with his versatility another showpiece of his well-rounded game.

Not to be mistaken for his ‘twin’, Michael, Ed Barlow made a real impact in his 10 games across 2019/20, remarkably enough finishing as the Crocs’ second-highest goalkicker with 25. The ex-Sydney and Bulldogs utility often proved too big and strong for his opponents through midfield and up forward, showcased most significantly in his seven-goal effort against Tiwi to lead the Crocs’ semi final triumph. A big game player, Barlow was a prominent figure in Districts’ late-season charge, featuring among the coach’s best six players in their last four games – including three finals. Given the impact he can have, it is no wonder he polled so well this year.

One of the NT’s brightest prospects is Brodie Lake, a two-time Thunder Under 16 representative and last year’s carnival MVP. The tall utility was employed mostly in the back six across his 15 games, locking down a spot in the Crocs’ squad throughout the latter half of the year as one of their more important figures. Capable of playing roles anywhere on the ground, Lake has earned plaudits for his coachability and is thriving as part of the Allies hub, training with the Gold Coast SUNS during their pre-season. Perhaps the top-end’s best draft prospect this year, Lake is certainly one to watch.

Perhaps the showpiece game of Districts’ season, their win over Tiwi was a great advertisement of the Crocs’ firepower. Ed Barlow led a brigade of four multiple goalkickers with his bag of seven, while the big names of Will Farrer, Josiah Farrer, Jeff Garlett, and Michael Barlow all also got on the board. Add to that the experience of Dean Staunton and Keegan Dingo to steady the ship, and it was a terrific all-round performance from the Crocs.

No worst loss for the Crocs this season, but a worst result instead, in their Round 2 draw with Wanderers. This result ultimately cost Districts a top three berth and finals double chance, boasting the percentage required to snatch third if they had picked up the extra two points here. Nonetheless, the usual suspects were in play here, with Will and Josiah Farrer both booting multiple goals, while Thomas Holman and the ever-present Michael Bowden were also among the best.