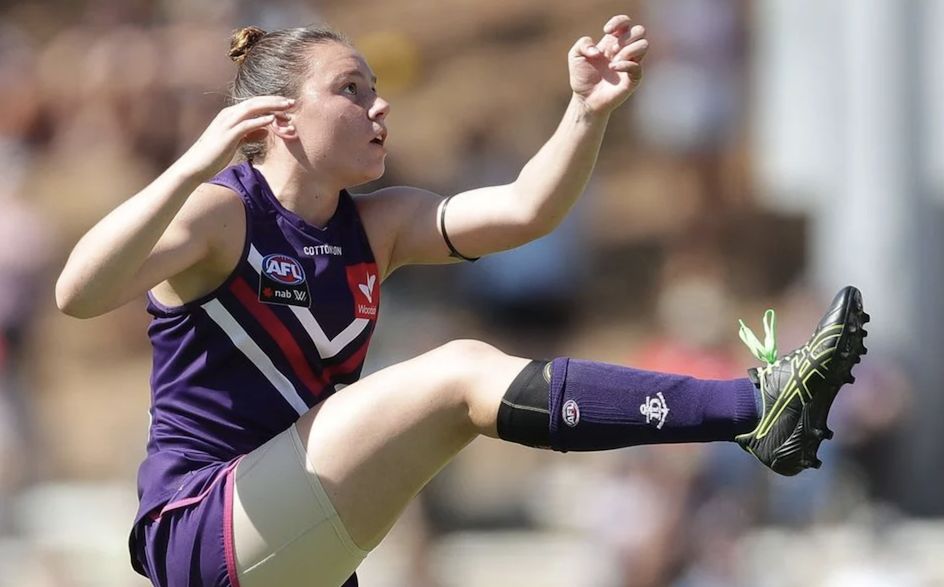 IN what is the final edition of the AFL Women’s Young Gun Watch round wrap up, we look at the four semi-finals and how each of the young guns stepped up who were born this century.

North Melbourne had a couple of young guns running around in the first semi-final to be played, with forward, Daisy Bateman and first year player, Mia King both in the side. Bateman booted the first goal of the game off a nice Jasmine Garner pass, and collected 10 touches, four marks, two inside 50s and laid four tackles in the game. King copped a knock during the match but courageously came back on to finish the game with six disposals. For the Magpies, they had four players born this century, with Lauren Butler tacking up the most touches courtesy of 11, as well as three marks, three tackles and two rebounds. Mikala Cann booted a crucial goal in the second term to help turn the tide and had seven touches, two marks and laid a huge tackle to win a free kick, while Jordyn Allen (five disposals) and Alana Porter (three disposals, two tackles and two rebounds) also had moments in the loss.

Young star, Alyce Parker again was instrumental for the GIANTS, winning the most disposals and trying her best to haul her side to the finish line. She racked up a game-high 23 touches, as well as four marks, three inside 50s and five rebounds in a standout performance. Former GIANTS Academy member, Brenna Tarrant ran out for the opposition and enjoyed a win, picking up three touches in her third game, while former Calder Cannons’ talent, Krstel Petrevski made her debut in the final laying a tackle and having a kick. Shelley Heath returned to the side with success, picking up eight disposals, three marks, four tackles and two inside 50s, while Tyla Hanks was the best of the four young guns in the side, amassing 12 touches, six marks, three tackles and three inside 50s in the win.

In a stacked game full of young guns, Fremantle and Gold Coast had five players born this century run out for each of the sides. The Dockers came out on top in a massive 70-point win, and it was the likes of Sabreena Duffy (11 disposals, three goals), Roxanne Roux (11 disposals, three marks, three tackles, two hitouts, five inside 50s and a goal) and Mim Strom (eight disposals, three marks, two tackles, 14 hitouts and one inside 50) who led the way. Emma O’Driscoll had the nine touches and six marks, while Bianca Webb also picked up eight disposals, as well as two marks, two tackles and two inside 50s in the win. For the Suns, Jacqui Yorston was a shining light in the loss, racking up 22 disposals, two marks, three tackles and a rebound, while Ellie Hampson (12 disposals, three marks and four rebounds) and Serene Watson (10 disposals, two rebounds) were impressive out of the back half. Lauren Bella (five disposals, 17 hitouts and two rebounds) did well through the ruck against her opposition one year her junior, while Dee Heslop also played in her first final with four disposals and two inside 50s.

In the standalone Sunday game, it was Carlton that got up with a strong second half, led once against by some impressive performances from talented youngsters. Last year’s Rising Star, Madison Prespakis picked up a game-high 18 disposals, as well as two marks and two inside 50s, combining with fellow second-year player, Grace Egan (15 disposals). Lucy McEvoy kicked a game-sealing goal for the Blues to go with her 13 touches and three marks to cap off a great debut season, while defender Charlotte Wilson was reliable again with eight disposals and two rebounds. For the Lions, Lily Postlethwaite was the standout of the young brigade, having seven disposals, three tackles and three rebounds in a hardworking effort, while Isabel Dawes (seven disposals, two marks and two tackles), Nat Grider (five disposals, four tackles) and Jesse Tawhiao-Wardlaw (three disposals, two tackles, two inside 50s and one goal) were the others who tasted finals action.