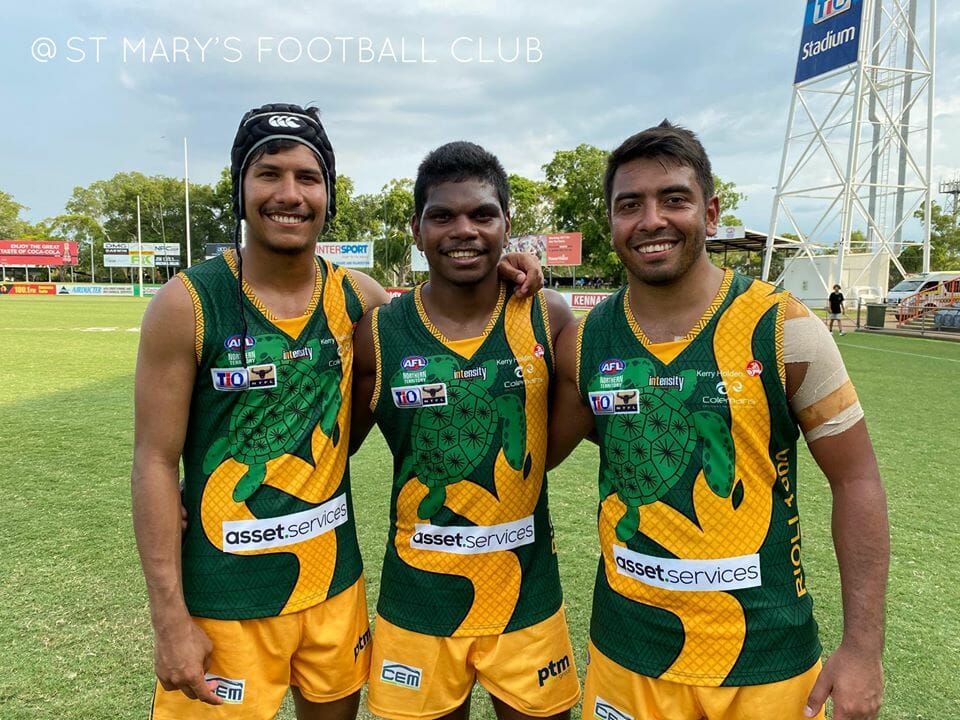 THE next club under review in our club-by-club Northern Territory Football League (NTFL) Men’s Premier League recap is St Mary’s, this season’s runners-up. Coming off a lacklustre 2018/19 campaign where the competition’s most revered and successful club placed last, the Saints very nearly pulled off a remarkable turnaround in 2019/20 by going one win short of snatching the premiership flag. Buoyed by some returning favourite sons, a batch of talented fly-ins, and a continual injection of youth, the Saints were a joy to watch this year on the way to rejoining the league’s elites. In one of the more impressive feats of its seasons, St Mary’s ended as the only side to defeat eventual premier, Nightcliff – twice – to prove the Saints’ true contender status.

A nine-goal haul in Division 1 was more that enough to prove that Calder was destined for bigger and better, with the Victorian making an immediate impact for St Mary’s upon his Premier League debut in November. Calder averaged almost four goals per game in his first month for the Saints, which included a season-high haul of six. But arguably his best game was reserved for St Mary’s semi final triumph over Nightcliff, where the spearhead bagged five majors to follow on from four in the previous week and lead his side’s charge into the grand final.

Coming off a slightly interrupted 2018/19 campaign, Davies returned to the Saints this season and was arguably their most important figure across an ultra-consistent year. Featuring in all-bar one game, Davies was a rock in defence for St Mary’s, providing a cool head and doubling with his marking presence as one of the league’s premier key backs. Defenders are often overlooked for awards and acclaim, but Davies’ impact was internally recognised as he featured in the coaches’ votes 13 times this season.

An absolute jet through the engine room and on the outside, Paredes has blossomed into one of the league’s leading midfielders since featuring in the Saints’ 2016/17 premiership side. The Victorian native again polled strongly in the votes, credit to his ability to find the goals from midfield and continually get his hands on the ball. Paredes hit the scoreboard in 14 of his 19 games this season, doing so in 12 consecutive outings at one point and booting two majors on eight occasions. It means he is a midfielder with a difference, and one of the first selected for the Saints week in, week out.

The latest in the rich history of Riolis to make his mark on the NTFL, Maurice Jnr lit up the big stage in his third year of Premier League football. Rioli Jnr is a potential Richmond father-son for this year’s draft, eligible via the 118 games his late father played in the yellow and black. As one of the few draft prospects to have gotten on the park in a delayed 2020 season, Rioli Jnr’s highlights will put him in good stead having averaged a goal per his nine games. A rising star nominee, Rioli Jnr captured the nation’s attention with his scintillating four-goal haul against Nightcliff in the Saint’s semi final win.

One of the more memorable Premier League results in recent years, this was the game that truly broke the bulletproof look of Nightcliff’s premiership defence. Having already become the only side to overcome the Tigers, St Mary’s did so again in just as impressive fashion and on the finals stage, no less. Fly-in Jackson Calder was terrific with five majors, but this match will be remembered for Maurice Rioli Jnr’s breakthrough four goals in a scintillating display. Lest we forget Liam Daly‘s tagging role on Nichols Medallist Brodie Filo, which was a key talking point come selection day in grand final week.

Hardly an embarrassment as far as defeats go, but arguably the worst among a group of only five for the Saints in 2019/20. Having already fallen to its traditional rival in a Round 3 shootout, St Mary’s looked poised to get one back on the Bombers just a week removed from a remarkable win over Nightcliff. But that was not to be, as the Saints were shut out incredibly well by Tiwi, with the Bombers’ running game working wonders going the other way as they enjoyed 24 scoring shots to St Mary’s 15. Leader Shannon Rioli did his bit with two goals, while the likes of Leroy Larson and Jackson Geary also snuck into the best dozen.