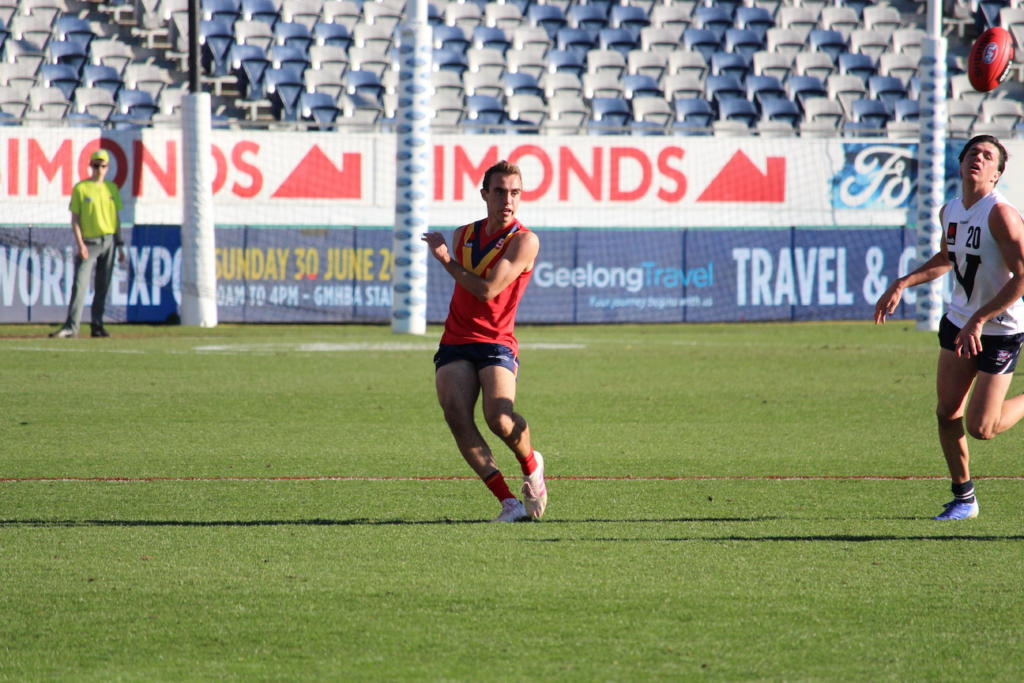 GLENELG has long been a successful producer of junior talent, and its league-high six representatives in this year’s South Australian Under 18 academy hub prove just that. Draft Central was lucky enough to catch up with half of that crop at the 2020 South Australian pre-season testing day hosted by Rookie Me, and with footy momentarily on hold, bring to you everything you need to know, to get to know the next generation of South Australian stars.

What better place to start than at the Den, which boasts the likes of Luke Edwards and Kaine Baldwin at the forefront of its stacked junior program. Edwards, a potential Adelaide father-son made the rare feat of playing all four national championship games for the Tri-Colours as a bottom-ager in 2019, and has been touted as a top 10 pick. Typically up the other end of the ground, the big-bodied Baldwin was instrumental in the Croweaters’ carnival-winning Under 16 campaign two years ago, but missed his bottom-age year having torn an ACL. See what the pair, and talented small Cooper Horsnell had to say in the wake of their 2020 season, on a range of topics.

Note, Edwards sat out the testing, but Baldwin continued his successful return from injury with promising results in the agility (8.54), running vertical jump (77cm), and yo-yo tests (20.8).

EDWARDS, BALDWIN, AND HORSNELL ON…

Edwards – “It’s a pretty long day to be honest but it’s a good day, good to get around the boys and interact with other clubs as well… “I’m injured today so I haven’t really done anything but if anything I’m just trying to improve my 20m (sprint) time so that’d probably be the test.”

Baldwin – “It’s been interesting. “It’s been good to see where I’m at and where all the other boys are at as well, especially at Glenelg I think we’re looking good for the year.”

Horsnell – “Not too bad, it’s been a bit of a wait to get from different tests but we’re at the Yo-yo test now so once that’s done, we get to go home. “I think the Yo-yo is probably my strength – my fitness going up and down. I think I’ve had a pretty good pre-season so can get a good score and show that out here.

Baldwin – “Obviously some of my best mates are from Glenelg so (I’m looking forward to playing with) Luke Edwards… James Borlase, I could name the whole team. “They’re all a good bunch of blokes and we’ve bonded really well together in the hub program so far this year.”

Horsnell – “It’s been really good, especially last year in the 18s with guys like Dylan Stephens and Will Gould, being around them and seeing how they train has been really good. “A bit of an eye-opener for this year which has been good… “(I look forward to playing with) Riley Thilthorpe, a big, tall ruckman. “And definitely Luke Edwards, I’ve played with him for a bit but he’s always good to play with, we’re good mates so I like playing with him.”

Edwards – “Hopefully I can play some senior footy, play a couple of League games if that’s before state champs or after state champs. “Obviously I’ve got my older brother (Jackson) who’s come down again so if I could play with him as well that’d be pretty cool. And hopefully by the end of the year, get drafted but we’ll just wait and see what happens with that.”

Baldwin – “I think my main focus is just the championships, especially because that’s pretty early – I’ll only really have a month or two of footy under my belt before that. Hopefully I can perform well there and we can get a win as a team as well.”

Horsnell – “I’m training with the seniors down at Glenelg now so hopefully playing a bit of senior footy. (I’ll) start off in the Reserves but see if I can put my name up there for League selection, and hopefully state champs as well.”

Edwards – “(Midfield) is where I’ll probably be playing mostly through the state champs. But it’s obviously good to be able to be that versatile type of player – go through the mid, down back. “I enjoy playing through the mid probably more, I find it easier than playing down back but hopefully through the mid a little bit more, find more of the ball which would be good.”

Baldwin – “I’d really like to keep working (as a key forward) and see how I go with that, but also to start looking at some more midfield craft as well being a bit shorter than maybe some more natural key forwards. “But besides that, key forward is probably my strength and I’ll continue to work on that.”

Horsnell – “I think moving up onto the wing a little more this year, get up the ground a little bit more, get involved and get the ball in my hands a little bit more hopefully. “It gives me a bit more flexibility too, to play two different roles (forward and wing) as well so yeah, looking forward to that.”

Edwards – “Probably just that contested marking if I want to go down back or if I want to go up forward. “Just being able to be that player who can run and crash a few packs like Kaine Baldwin and take some big marks, that’d be pretty cool.”

Baldwin – “I guess a day like this is probably a good indicator for me, just working on speed and agility and just becoming more mobile and versatile so I can play more positions.”

Edwards – “It’s not major, it’s just a little bit of a lower back (issue). “It’s just been out for a little while, for about two weeks now but I should be back pretty soon hopefully.”

Baldwin –  “I’ve been working through my rehab with my ACL and progressing as my physio and doctor tell me, so I’m pretty excited to get back and probably looking for a return early in the year.”