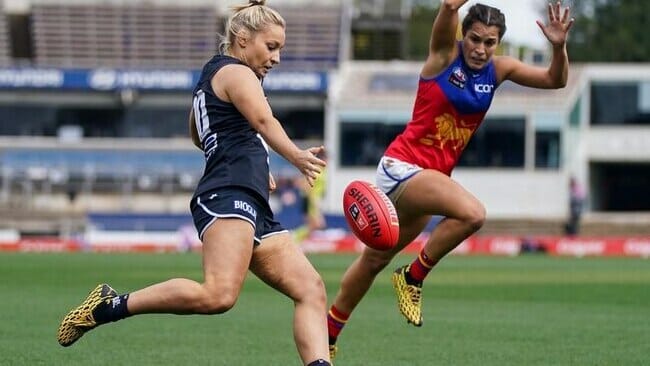 CARLTON won through to a would-be AFL Women’s preliminary final after toughing out a 29-point win against Brisbane on Sunday afternoon, but will have to settle for a second-consecutive top four berth on the back of its 6.8 (44) to 2.3 (15) triumph. Renowned for their ability to adjust gameplans mid-match, the Blues eventually got their running game going in the face of Brisbane’s early pressure to coast home on the turf of their Princes Park fortress.

The hosts did not have it all their own way throughout the contest, as the Lions dominated much of the early proceedings on the back of some fierce tackling and a sound set-up behind the ball. The footy was red hot, meaning Carlton could only turn the ball back over from its defensive half, while Brisbane was seldom afforded a straightforward avenue to goal. Despite the Lions’ control of the territory, they were unable to translate it to scoreboard pressure, with Jess Wuetschner’s snap coming only after her side boasted nine of the first 10 inside 50 entries. But her six-pointer was cancelled out at the other end by ex-Lion Tayla Harris, who was also attacking aerial balls with intent and gave the Blues a target to kick to on the rebound. Carlton’s overuse made it difficult to fully utilise her though, even if the Blues were hanging in the contest.

With the wind favouring one end of the ground, the second term saw a complete role-reversal as Carlton shifted the tide in its favour – only, the Blues were also able to keep the Lions scoreless in snatching a one-goal lead at the main break. Harris’ ability to bring the ball to ground worked wonders for the Blues’ smalls, as they got to work in mopping up the spillages to prove more effective inside forward 50. Darcy Vescio’s early goal to edge the Blues ahead looked to be a catalyst for her side, but the Lions’ defence held up well. Brisbane was largely a non-threat going the other way though, with the majority of its numbers occupying the defensive half in what seemed to be a damage-limitation tactic while Carlton owned the scoring end.

A bruising first half looked to have produced casualties for either side, but defenders Vaomua Laloifi (Carlton) and Shannon Campbell (Brisbane) both took the field in the third term after coming off worse for wear in heavy collisions. Key moments came early in the third stanza with the first goal key in deciding which way the momentum would shift. A 50-metre penalty helped Carlton dissipate the wind disadvantage, and it should have yielded the Blues a goal as Maddy Prespakis’ snap sailed through the big sticks – only to be wrongly adjudged as being touched off the boot. But it mattered little after another 50-metre penalty gifted Georgia Gee her first major after the running machine laid a big tackle on Campbell just outside of the arc. Gee was in the action again as the Blues began to take over on the outside with pace, and a long Harris bomb saw Gee covert a second major over the back to put the Blues three goals to the good. The frustrated Lions looked out of the hunt, only to be buoyed in the final minute as Jesse Wardlaw was infringed despite being outnumbered three-to-one, allowing the youngster to cut the margin to 15 points heading into the final break.

After some tense tussling in the early goings-on, Gee’s third goal from another snare close to goal sealed the deal with over eight minutes left on the clock. That left the ultra-impressive Lucy McEvoy to put the cherry on top of the Blues’ sweet win, snapping home in the final minute as Carlton again kept the Lions scoreless for the entire term. The toll continued to tell on the players with Prespakis recovering from an ankle knock, while Sophie Conway’s troublesome shoulder gave her some grief amid the gruelling contest. It would have mattered little as the Lions were set to bow out, but Prespakis’ recovery would have been a sticking point should the Blues’ meeting with North Melbourne have been scheduled to go ahead. Harris’ impending report could also have spawned a talking point, but the key forward’s sling tackle on Emily Bates looked to have been safe enough.

While a typically even team performance gave Carlton the edge, individuals took hold of certain periods to help the Blues gain the ascendancy. Arguably the most important of the lot was Gee’s three-goal contribution, with the pacy forward’s electric second half at the forefront of Carlton’s greater fortunes. Prespakis was at her usual best, covering the ground well for a game-high 18 disposals, while Grace Egan capped off a memorable debut season with 15 touches. The sweeping defensive trio of Kerryn Harrington (16 disposals, three marks), Jess Hosking (15 disposals, seven marks), and Laloifi (10 disposals, two marks) was outstanding, with the leading options of Harris (eight disposals, one goal), Vescio (12 disposals, one goal), and Nicola Stevens (six disposals) all playing roles which exceeded their statlines.

In a losing effort, it was most of Brisbane’s ‘foundation eight’ which stood up to keep their side in with a fighting chance. Kate Lutkins headed the effort in defence with 16 disposals, three marks, and three tackles, while the engine room workers in Ally Anderson (17 disposals, four marks), Bates (15 disposals, five tackles), Conway (13 disposals, four marks, five tackles) and Catherine Svarc (12 disposals) all gave it everything. Wuetschner (11 disposals, one goal) and ex-Blue Lauren Arnell (10 disposals, four tackles) both put in shifts from half forward with admirable running both ways, unfortunately to no avail.