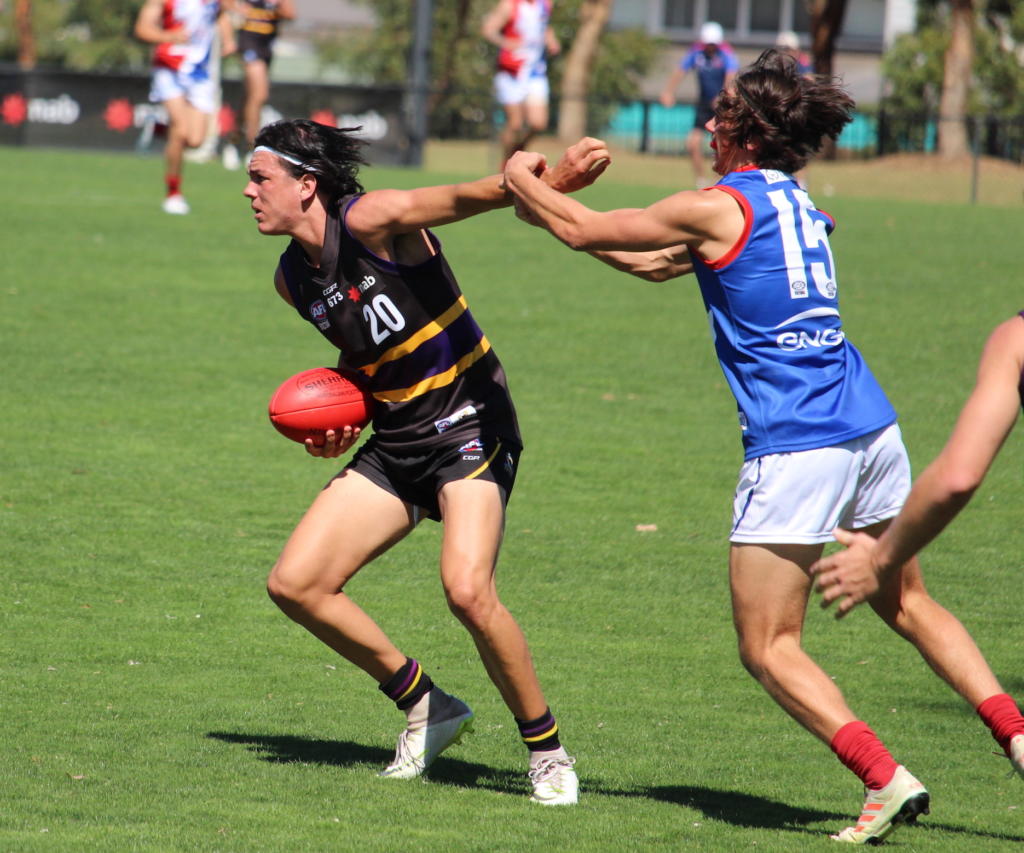 POTENTIAL top pick, Elijah Hollands has no intention of focusing on the negatives of his lengthy stint on the sidelines. The Murray Bushrangers and Vic Country star unfortunately suffered an anterior cruciate ligament (ACL) tear in his knee at training prior to his first practice match of the year, which ruled him out for the entire 2020 season.

Having achieved the rare feat of playing every game for Vic Country as a bottom-ager, Hollands was regarded as a top five pick, and potential number one selection with his size, high-flying ability and class among his key standout attributes. Speaking to the 188cm forward/midfielder at the NAB League Fitness Testing Day hosted by Rookie Me, Hollands said he was optimistic about the road to recovery after a successful surgery just two days prior to the testing.

“It’s (the recovery) going really well,” he said. “I had the operation on Thursday, went into Epworth and got it done by Tim Whitehead and came out with no issues. “The surgery went really well, I was looked after really well by everyone there. “The long road starts now but I’ll be back, it’s just one of those things unfortunately with footy.”

He said prior to the knee injury, it had been a good pre-season and he was looking forward to attacking the matchplay. Though he will now not get a chance to run out in a competitive match, Hollands has remained positive that he can benefit from missing out.

“I was feeling pretty fit and strong,” Hollands said. “I had a pretty good pre-season with the Vic Country boys and the Bushies boys. “I was really looking forward to getting into things. “I was four days away from my first practice match, but I’ll be okay. “I’ll get the chance to come back even fitter and stronger now, so I look forward to that.”

His preseason also included having a run around with the reigning premiers, Richmond at training as part of the Vic Country Hub program. Joined by Murray teammate Zavier Maher, Hollands said it was an “awesome” experience and they felt like part of the team immediately.

“Zav Maher and I went down to Richmond in the first week of December,” he said. “The Richmond guys were sensational in the way they went about it, and included us straight away from the first session we were in so they were pretty awesome.”

It was somewhat fitting that Hollands landed at the Tigers, the club where his father, Ben played eight games in 1999. While it might have been a brief AFL stint, Hollands played more than 100 games at West Adelaide after spending time on Port Adelaide’s rookie list, and has the experience of being in an elite system – something he passed on to his son.

“It was funny (being chosen to train with Richmond),” Hollands said. “He played his only senior games at Richmond as well. “A few boys still remembered him, who have obviously been working there for a long time. “But he’s been great, he’s been really awesome with me as well. “Especially now with me, it proves his point that things change really quickly, so he was probably on the bad end of the business of the AFL, getting delisted a few times. “But he’s been really big on making sure that I enjoy the moments that I’m playing footy and I realise that slowly now.”

While many prospects fret when facing a long time out of the game in their top-age year, Hollands has been relieved that he has some runs on the board after a strong bottom-age season last year. It included representing Vic Country where he played all four games, recording 13.5 disposals, 2.3 marks, 5.5 tackles and 5.3 inside 50s. He continued that form with the Bushrangers, albeit for four games while juggling his school commitments, averaging 17.0 disposals, 5.5 marks, 3.8 tackles, 2.5 inside 50s and a goal a game.

“I was pretty happy with my season last year,” Hollands said. “I thought I started the NAB League season pretty well, mostly playing as a higher forward then. I was really happy with the opportunity in the Vic Country side and that was an awesome experience. “It’s like a family, I guess that’s what we’re known for and that’s what we try to be. “We’re like a family when we do all our Vic Country stuff whether it’s the hub or even during the national championships. I actually rang ‘Browny’ (Leigh Brown, Vic Country coach) the day I did my ACL just to thank him for picking me otherwise I might not have been maybe in this position now, so I was really thankful for the opportunity to play and be a part of that. “We had a pretty successful carnival as well.”

Hollands described the feeling of running out on AFL Grand Final Day as in the Under 17 Futures All Star game as “awesome” and “special”, something that he is unlikely to forget anytime soon.

“That was probably my highlight of the year, getting to run out on Grand Final Day, with some of the best boys my age as well that was awesome,” Hollands said. “To be able to hang around and watch the game afterwards that was pretty special.”

Hollands has made plenty of friends over the journey and got to know some of the best up-and-coming talents across the Vic Country and Murray Bushrangers programs. When asked about who he was looking forward to watch this year, Hollands pointed to an unlucky Country teammate, and a fellow hub member from Murray as ones to keep an eye on in 2020.

“It will be good to watch Tanner (Bruhn, Geelong Falcons) get back into things, he was sitting out most of the year last year,” he said. “I’m really keen for him to hopefully get a clean run of health. “He’s obviously got an immense amount of talent and it will be good to watch him go about things. “Another Bushies boy, Zav Maher he’s had his first full preseason, he just got that under his belt. “He’ll come out a lot fitter and a lot stronger this year. He’ll run the Murray midfield this year and do well.”

Being out for the year means the talented mid/forward will not be able to achieve his goals of becoming a more permanent midfielder and improving his strengths in there. But he already has an eye on the future and getting right for the 2020 off-season where it is expected he will be running around in different colours.

“That was probably the first goal on my list (to go into the midfield),” Hollands said. “I was sort of in that transition period last year moving into the midfield, I was hoping to boast a few more midfield minutes this year. “So that will be something I will try and work towards when I start my next pre-season and hopefully I’ll be able to achieve that.”