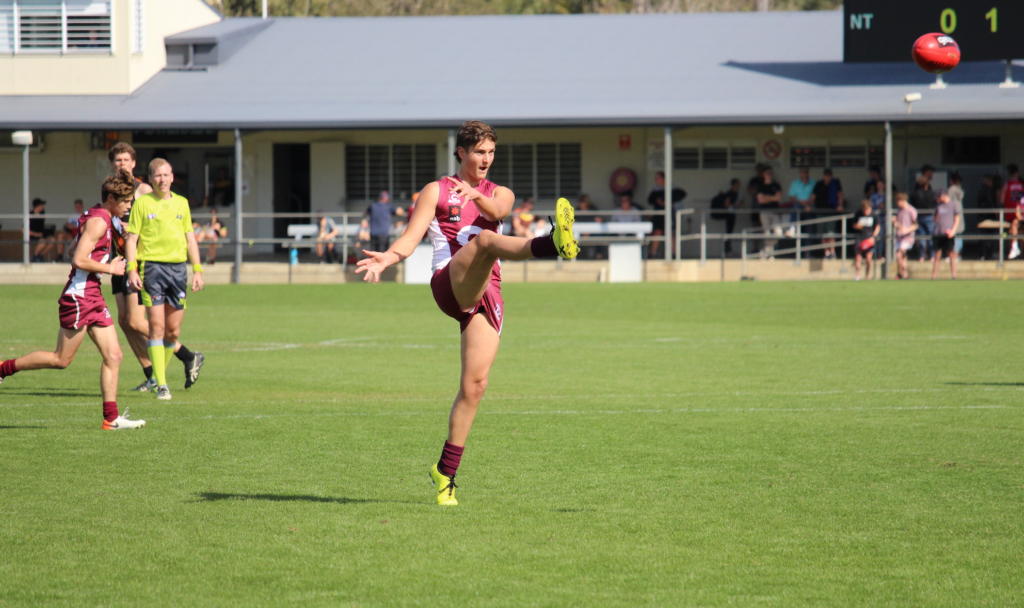 THE Greater Western Victoria (GWV) Rebels are set to bring a bottom-age heavy list into the 2020 NAB League season, with some fast-developing top-agers and 19-year-olds also in the fold. Talent Manager Phil Partington said his club is “buoyant” about their prospects in the new year despite the current air of uncertainty, with a strong pre-season for all age groups putting the Ballarat-based program in good stead.

“We’ve been really pleased with the way our boys have gone throughout the pre-season,” Partington said. “Certainly our coaches have been really focussing on the fundamentals of the game, the skill development of the game which we’ve seen a marked improvement on in our skillset with the boys. “We’ve performed well over the pre-season trial games and into the practice games so we’re buoyant about how we’ll go this year. “We’ve got a very bottom-age group; we’ve got 50 boys in the squad so basically 18 top-agers this year, four 19-year-olds, and I think it’s 28 bottom-agers, so our bottom-aged boys are really talented across the whole region and we’re looking forward to seeing how they develop throughout the year.”

The Rebels had an impressive nine products turn out at the Under-16 National Championships last year, with a bunch of them injected into the NAB League squad post-carnival to good effect. Among them was Josh Rentsch, a developing tall who, along with Queenslander, Jye Lockett is set to have an impact on the GWV team this season.

“We had eight (16-year-old) players play Vic Country last year and one for Queensland and those boys are ready to go,” Partington said. “Those boys presented themselves really well last year as 16-year-olds in the games they did play so we’re looking forward to seeing how they go. “Young Josh Rentsch is now at boarding school in Ballarat so we’re really pleased to have Josh semi-full-time in our program. “For a young developing tall to be in our backyard and to have a bit more development that we can do with him is good for his development overall.”

“Jye is Tony Lockett‘s nephew and the family have got a really good connection with the North Ballarat Football Club through Tony’s dad and also Jye’s father, Neil. “They’ve sent him down to boarding school to further his studies and have footy opportunities as well so Jye’s been in the program now for the last two years as a 16-year-old with us and now a 17-year-old. “He’s developing quite well over time with us.”

Lockett is a member of the Gold Coast Suns Academy and will represent Queensland or the Allies if selected. He is one of a few familiar names scattered across the Rebels’ list, but Partington insists each prospect merits their own selection.

“We certainly don’t pick players on names, every player in our squad is deserving of their opportunity through their potential and also their development they’ve had through the pre-season, he said. “We want these boys, and the boys want to make their own name in footy going through. “We’ve got Myles McCluggage and young Sam Butler as well – Sam’s the brother of Daniel Butler. “These boys are performing well, we just need them to continue to develop and we don’t want to put too much external pressure on these boys because they are their own player and they’ve got their own traits in how they play.”

Arguably leading the pack of the Rebels’ draft eligible players is their sole 18-year-old Vic Country Hub member, Nick Stevens, who will look to back up a promising 17th year. Partington said the development of returning top-agers and 19-year-olds has been the most pleasing aspect of the program.

“Our talented players are becoming more developed, and our 19-year-olds are developing further through the Geelong VFL program and our alignment with them,” he said. “Nick’s in the AFL Academy, the Vic Country academy. Harry Sharp‘s an elite runner, Harry’s done a lot of things right as a 17-year-old and certainly developed further as an 18-year-old, combining his athletics and football this year. “So we’ve got some nice developing types for our top-age. “The beauty of our program is because we’ve got some boys from all over Western Victoria, (there are) boys who are travelling 3-4 hours to get to training on Thursday night so we see the development for boys that have missed out last year as 17-year-olds that have gone back and played senior football. “I think we’ve had five players that missed our squad as 17-year-olds last year that’ve come into our squad as 18-year-olds this year… so we’re really buoyant that that’s happened.”

“Isaac (Wareham), unfortunately we probably wouldn’t be talking about him now if he played the last six games of the year without injury, he missed the last half of the year after the national championships. “He’s born on 24/12 so he’s a very young boy still and only a week from being a NAB League player officially as an 18-year-old this year. “All our 19-year-olds have got special AFL traits about them, but looking to have a bit more consistency in their games. “A lot of those boys have been disadvantaged as well with where they live – one night a week we only see them, compared to some boys in other areas who are two or three nights a week. “Our boys are underdeveloped (in that sense) and being in a Geelong VFL program full-time, we’ve already seen marked improvement in these boys when they’ve come back and played our trial games and we’ll see when the season starts up again they’ll be further developed once they get into it.”

A prime example of what each of the Rebels’ draft hopefuls should be aspiring towards comes from a 2019 graduate who bolted from a long way back in Jay Rantall. As GWV’s sole draftee last year, Partington said one key off-field trait helped him to harness his full potential at the junior level.

“Character and work ethic, that’s the number one driver for boys to make the AFL and Jay had bucketloads of that,” he said. “He’s very determined and he hadn’t been in some of the pathway programs at all because he had his basketball commitments, so he knew he had to improve on parts of his game and his skill assets and he certainly did that in his own time and during training to get himself better.

The Rebels were set to kick off their 2020 NAB League season against Dandenong Stingrays on home turf, but that clash has been pushed back amid competition postponement.