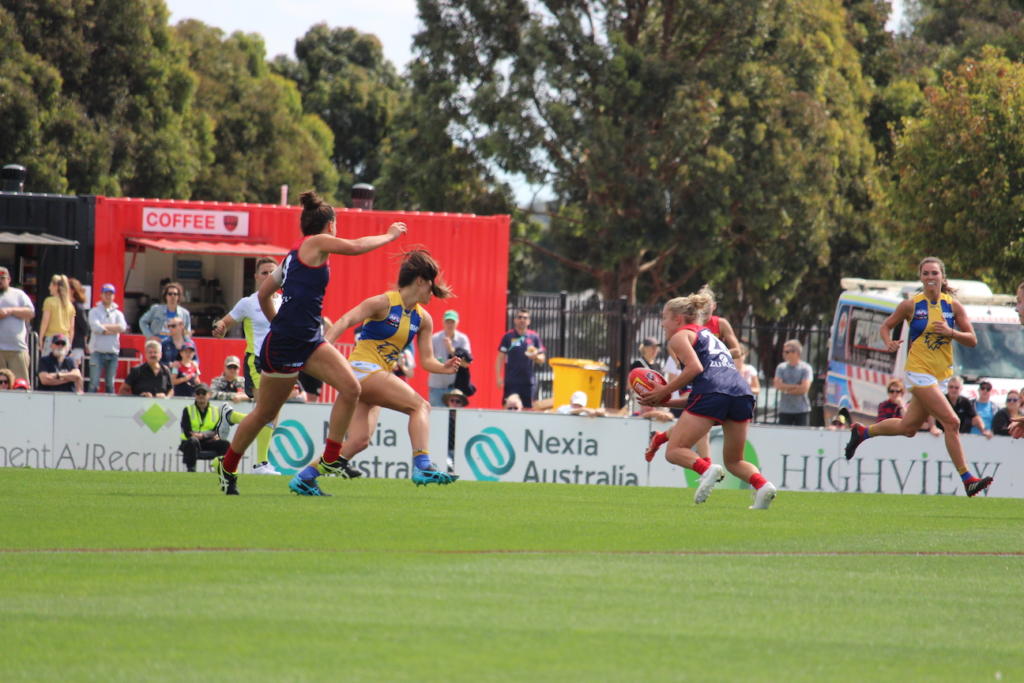 IN our sixth edition of the Young Gun Watch, we take a look at some of the top young performers across the AFL Women’s competition in Round 6 focusing on those players born in the 21st century (2000 or 2001). We analyse match-by-match just how they performed and what they did well.

North Melbourne ended up coasting to a comfortable victory over Geelong on Friday night to maintain top spot on the Conference A ladder. However, star Cat Nina Morrison’s devastating injury would be the main takeaway from the game as she unfortunately ruptured the ACL in her right knee for the second time in two seasons. As things went from bad to worse for Geelong fans, Olivia Purcell gave them something to smile about having collected 18 disposals and five tackles. Millie Brown (nine disposals) and Sophie Van De Heuvel (eight disposals) were also serviceable in what was a tough night for the Cats. Daisy Bateman again provided pressure up forward for the Kangaroos resulting in a goal for her five mark and five tackle effort. Making the most of a high-scoring team performance was Mia King, who managed her first career goal after gathering 12 disposals and an impressive seven tackles.

Collingwood collected a dominant road win against Brisbane, keeping them in the hunt for finals footy. Much like the rest of the team, Brisbane’s young talent couldn’t quite get into the game with their first draft pick in 2019, Lily Postlethwaite, collecting just the two disposals. Natalie Grider showed some positive signs out of defence, collecting 10 disposals and laying four tackles having to contend with the sharp and abundant inside 50 use from the Magpies. Full-forward Jesse Tawhaio-Wardlaw had seven disposals, three marks and six hit outs while Isabel Dawes managed five disposals in what was a quiet night for Brisbane’s forward stocks. Collingwood’s experience led the way as their young talent played roles in the win. Jordyn Allen had nine disposals and five marks while Lauren Butler also collected nine disposals off the half back-flank. Mikala Cann (five disposals, four tackles) and Alana Porter (five disposals) were also useful.

St Kilda boasted contributors across the board as they held Richmond goalless at Moorabbin on Saturday, a first in AFLW history. The Saints’ youth again impressed as their first draft pick, Georgia Patrikios, had 14 disposals and a couple of tackles out of the middle, unfortunately also just missing out on a goal. Dandenong product Molly McDonald showed large improvement with 12 disposals, six marks and three tackles, while Isabella Shannon was serviceable with four disposals and two tackles. Nicola Xenos again applied solid pressure in the centre with six tackles, as she enjoyed a well-rounded 11 disposal performance to go with a goal. The Tiger’s young talent endured a tough day with the rest of the team, with Kodi Jacques (seven tackles) and Sophie Molan (eight disposals) the stand-out players. With finals footy out of the question for Richmond, Nekaela Butler (five disposals, three tackles) and Ciara Fitzgerald (two disposals, two tackles) both debuted in the loss.

Alice Springs brought the heat on Saturday in more ways than one, with the Blues enjoying a 16-point win over the Demons, propelling them to second on Conference B’s ladder. Sticking with mature-aged players, Melbourne again played just the two players born this century. Tyla Hanks has been the most impressive all season and started in the centre, collecting 11 disposals and laying six tackles. Hanks now averages five tackles per game on the season. Carlton’s youth again showed why they are arguably the best in the league, with Madison Prespakis leading the crop in a typical Prespakis performance of 23 disposals, four marks and a goal. Lucy McEvoy put up impressive numbers with 19 disposals, while last week’s Rising Star nominee, Charlotte Wilson, had 11 disposals and six marks out of defence. Murray product Grace Egan was also important, popping up with a goal to go with her 11 disposals and three tackles.

Fremantle maintained its perfect record off the back of a dominant final quarter which saw them outscore the Bulldogs 25 to six at Whitten Oval on Sunday. The highest-scoring game in AFLW history was littered with admirable performances from youth on both sides as fans were treated to the future of the competition. The Bulldogs’ young talent improved greatly on last week’s performance with Gabby Newton (16 disposals, eight tackles) and Elisabeth Georgostathis (13 disposals, four tackles) leading the way. Gemma Lagiola (10 disposals) and Eleanor Brown (11 disposals, three tackles) were also important for the Bulldogs, as Hannah Munyard returned nine disposals, three tackles and a goal. Britney Gutknecht (seven disposals, four tackles) played her second game for the season, while fellow former Northern Knight Nell Morris-Dalton debuted with eight disposals and five tackles. Fremantle’s Mim Strom backed up last week’s effort with an even more dominant 25 hitouts, playing a lone hand in the ruck with Roxanne Roux out. Though it was not four goals, Sabreena Duffy managed to keep the Bulldogs defenders under pressure with five tackles, while Emma O’Driscoll managed seven disposals.

The GIANTS defeated the Crows for the first time in franchise history behind closed doors on Sunday, running out five-point victors. Adelaide continue to showcase their young talent as finals footy feels like a long way for them having suffered this loss, with Montana McKinnon again the most impressive. The six-foot ruck again provided the Crows midfielders with deluxe service with 17 hitouts. Danielle Ponter collected six disposals out of full-forward to go with her two tackles, while Jaimi Tabb managed just the five disposals. GWS again opted with just the one player born in this century and you cannot blame them. Star midfielder Alyce Parker enjoyed a best-on-ground performance with 30 disposals, seven marks and three tackles. She led all players in the disposal count as she now averages just over 20 disposals on the season. With just two more 21st century-born players on the list, you hardly expect the GIANTS to change the formula heading toward finals.

The SUNS enjoyed a 25-point win on Sunday against the Eagles after having kept West Coast without a goal for the first three quarters. The Eagles will be looking forward to next year’s draft to secure more young talent as McKenzie Dowrick and Sophie McDonald were both out this week, leaving winger Mikayla Bowen the sole 21st century-born representative. Bowen gathered nine disposals and three tackles in what was a tough day for the Eagles. Inversely, Gold Coast’s youth all enjoyed solid outings as they kept their season alive. Lauren Bella dominated the ruck on her way to 16 hit outs, sharing the load with debutant Taylor Smith who was useful with 10 disposals and four hit outs. Gold Coast’s pressure was pivotal throughout the game with Jacqui Yorston (12 disposals, four marks, nine tackles), Ellie Hampson (12 disposals, six tackles) and Dee Heslop (five disposals, 10 tackles) all driving factors in that aspect.