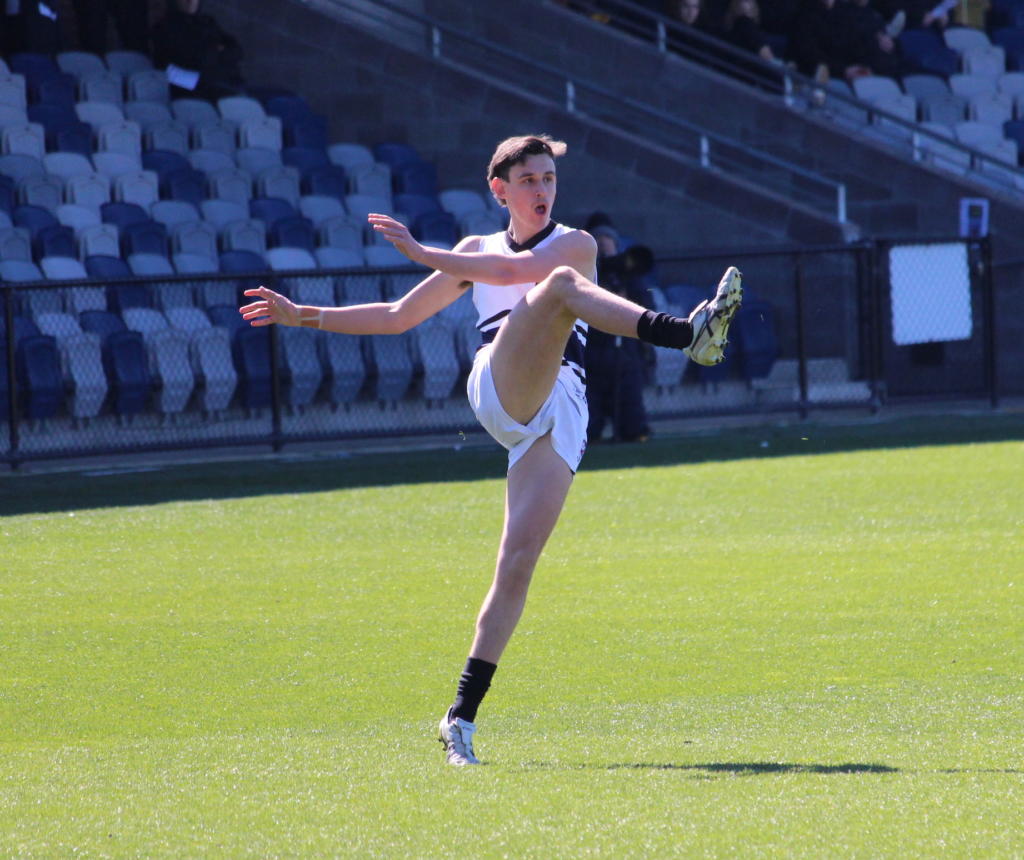 WHILE the preseason has been been eventful for all NAB League staff and players alike, Northern Knights Talent Manager Rhy Gieschen has had plenty on his plate. After the feel-good story of the draft saw Sam Philp bolt into the first round despite being overlooked for Vic Metro selection, Gieschen had two more 2019 graduates in the mix for late AFL call-ups.

Ryan Sturgess, a hard-working utility who played every game during the national championships, was one of four players vying for Carlton’s final list spot. He missed out to Callum Moore, five years his senior for that supplementary position, but the Knights had one more ace up their sleeve – rather, an Ayce. Adelaide surprised many by taking 19-year-old Ayce Taylor – who was initially cut from a stacked Oakleigh Chargers squad – in the last embers of the preseason supplementary selection period (SPP), especially given they had just drafted two high-end key defenders in November. But to Gieschen, recognition from the elite level to both players was credit to their willingness to leave no stone unturned.

“(Adelaide) got two high quality key defenders, but then showed that they rated his talent pretty highly because they had another opportunity to pick and they took him,” Gieschen told Draft Central. “I think they had spoken to him about staying ready to go and getting into a VFL program, to work really hard and if an opportunity arises you’re in our mind. “So it was great by them to stick with him and give him another chance, his ability to head to North Melbourne (VFL), keep training and stay really fit and ready was great.”

“Ryan’s shown unbelievable resilience and I guess the ability to just keep going. “Missing out on the draft, then doing the rehab to get his ankle right and then taking his opportunity with Carlton – I think he put his best foot forward there and gave it every chance that he possibly could but just got pipped at the post by probably a more seasoned played who had been on a list. “But certainly left no stone unturned, the good thing is he signed at the Northern Blues and like everyone else he’ll just keep working hard and be ready to go when given an opportunity. “Just to stay under the eyes of the recruiting staff and list managers and the coaches is probably the best thing for him to make sure if a spot pops up, he’s putting his best foot forward.”

“We can’t control the draft, what we can control is the individual development of the player and them buying in to our program and the culture that’s created. “It just shows us, them, (and) everyone in this environment that it is difficult to get drafted and you’ve just got to keep working at it and if it doesn’t happen in your top-age year then you just keep striving and keep playing the game… like what happened with Ayce and Ryan.”

The same resilience shown by Taylor and Sturgess is something Gieschen and his troops are trying to replicate amid present uncertainty created by the COVID-19 outbreak, with the NAB League season postponed until late-May. Having garnered some decent momentum heading into what would have been Round 1, Gieschen says keeping the squad ready will be key to their success, but some stumbling blocks may appear with the group potentially unable to train together.

“We preach the ability for the boys to be really resilient regardless of what cards you’re dealt or what setbacks come your way, just to constantly stay resilient and stay positive about what’s happening,” he said. “I think that’s what sets good players and good athletes apart from the great ones – just their ability to change to different situations and disappointments and setbacks and move forward. “We were lucky enough that we actually had the group in when we got the news so we were able to break it to them in-person and speak about what it means. “To their credit they were really positive and a few of the senior players stood up and spoke about staying ready and staying hungry, being really ready to go so I think they’ve formed some pretty strong bonds and the culture was really positive going into Round 1… the players will be training pretty strongly individually and making sure that when the time comes they’re ready to go straight back into it.”

“One thing that we really will pride ourselves on this year is our running ability,” Gieschen said. “All the fitness test indicators identify the fact that our core group are really, really strong runners – our 2km times were exceptional.”

“Nik Cox is really professional in the way he goes about things, he’s obviously a really exciting talent – 199cm and he just ran a 6.05 on his 2km time trial which puts him in the absolute elite category of anyone who’s ever come through these programs with his endurance,” he said. “He kicks the ball really well on both feet and makes good decisions, we’ll likely play him centre half-back and we’re really keen to see how he continues to develop because he’s certainly got a lot of weapons at his disposal.

“Ewan’s had a really strong preseason. “He’s taken his 2km time from seven minutes last year down to 6.30 which was a huge effort from him and testament to how hard he worked over the break.”

While the three mentioned are all “different” prospects, McMahon is one who Gieschen was keen to get a gauge on, with the key forward able to generate plenty of excitement but looking to find greater consistency.

“Again he’s an exciting athlete, he’s 193cm but one of his strengths is his agility and his ability to move and get up the ground and he marks the ball at its highest point,” he said. “He has some really good tools in his game with his marking and he’s got beautiful disposal, kicks the ball well and he makes good decisions in the forward half.”

Along with a talented crop of top-agers comes a strong core of bottom-agers who will look to impress, while a shake-up in the Knights’ approach to 19-year-old listings also looks set to pay off as they juggle VFL and NAB League duties.

“We’re pretty positive about our bottom-age group, we think they’ve really come on and I think there’s some players there that’ll be pretty good performance-wise throughout the year,” Gieschen said. “Ned Long, Josh Ward, Darcy Wilmot, Pat Dozzi, Joel Fitzgerald, James Nadalin are all working well with us. “We want to make sure that we’re investing really heavily in the top-agers, but we think there’s a pretty good core group of bottom-agers coming through as well that will catch the eye throughout the year.”

“We’ve set all our (19-year-olds) up at their VFL programs full-time. “Ryan Gardner, Lachie Potter, and Jack Boyd have all trained full-time at the Northern Blues, so whilst we’ve put them on our list as 19-year-olds, we thought it was really important for them to get an new experience and train at a VFL club with seasoned, senior-bodied footballers.”

“We’ve taken Liam Delahunty from GWS, he’s returning from a dislocated knee so he’s doing all of his rehab at North Melbourne VFL. “Lachie Gawel we’ve only acquired recently from Eastern Ranges, but he’s been training with the Northern Blues full-time as well, and Nathan Howard‘s coming back from his surgery. “So we think it’s really important for them to keep challenging themselves and stay engaged in the VFL program and then if they’re missing out on a game at VFL level, they’ve got the option of coming to showcase their talent in the NAB League program.”

Another less-heralded name to keep an eye on will be Liam Kolar, who Gieschen says the Knights “rate the talents of” having transitioned from a multi-sport background. Kolar is one of many across an even spread of prospects who is poised to accelerate his development.

“He’s a unique athlete, he’s 194-195cm and ran his 2km (time trial) in 6.09 – he’s come from an athletics/soccer background,” Gieschen said. “But he’s already shown his ability to transition into footy, played a really strong practice game against the Western Jets and then backed it up with two goals on the weekend against the (Oakleigh) Chargers – one sort of showcased all of his attributes, took two or three bounces, took the defender on and kicked the goal from 50 – so he has all the athletic attributes that all the recruiters like and we just want to see him improve his football.”

A practice match win over Oakleigh and leadership group announcement have the group in good spirits despite the waiting game each club is currently undertaking, with the Knights raring to go once given the all-clear to return to the field.