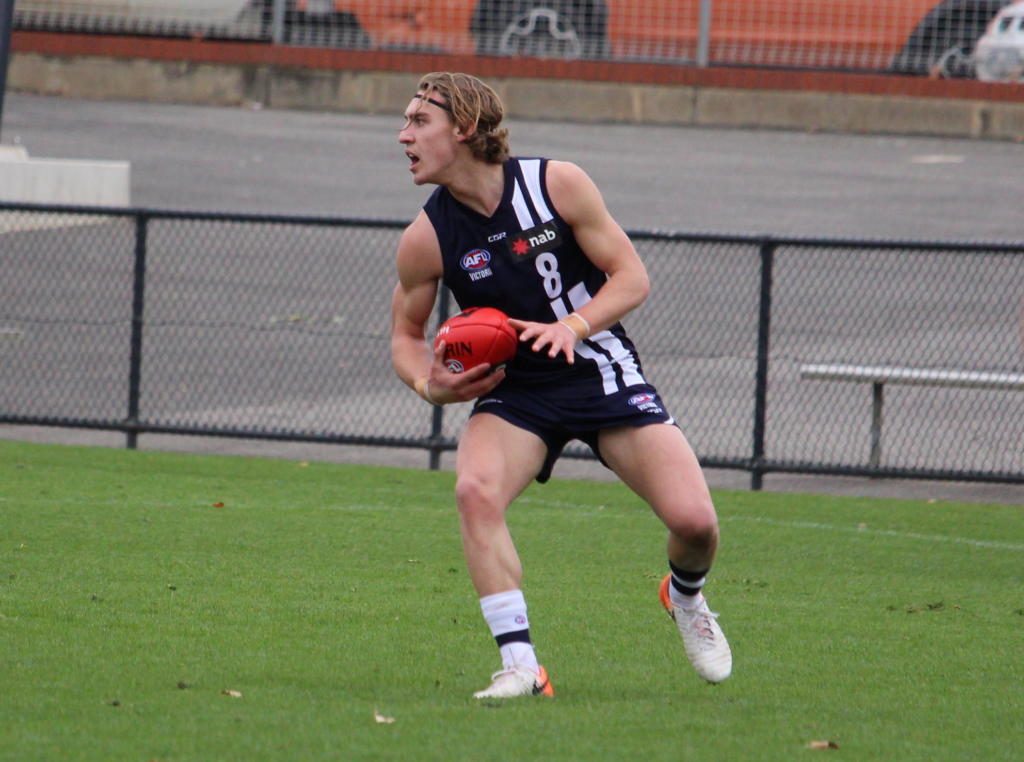 SILVER linings often prove golden for talent managers among the nation’s elite talent pathways, but Geelong’s Mick Turner has seldom had to search for them across over 25 years in the job. That somewhat changed in 2019 as the Falcons endured a lacklustre season on-field and produced their lowest draft haul since the proud program’s inception (one), with co-captain Cooper Stephens picked up in the first round by the region’s AFL club.

Aside from boasting yet another first round pick in Stephens, the silver lining in the Falcons’ “out of the blue” year was being able to accelerate the development of a number of bottom-age prospects who will now lead the club in their 18th year. On the back of a solid pre-season, Turner is optimistic his squad will be able to make marked improvements on last year’s output.

“It’s been a pretty good preseason for us, this is the culmination for it with the Rookie Me testing for the AFL,” Turner told Draft Central at the Rookie Me pre-season testing day. “We believe we have a very good squad this year in terms of team and individuals for the draft and hopefully the boys test well.”

“Over the years we’ve been probably the most successful club in Australia at getting players drafted and players on AFL lists – I think last year we had 45 players on AFL and I checked most weeks we’ve got 30 to 35 playing AFL seniors so, we’re pretty happy about that. “Last year was a bit one out of the blue, we had a very frustrating year. “Cooper Stephens got injured, he broke his leg early in the season, Jay Dahlhaus who is really important for us got injured and Tanner Bruhn had a knee operation. “We won three games and then we had a draw, a point loss, a two-point loss, a four-point loss, a seven-point loss – if one of those players played we could have won seven or eight more games.”

“We made a concerted effort at the end of the year to play (16 and 17-year-olds) and I think in the last game against Sandy in the Wildcard Round they beat us by 15 goals but when we looked at it, we had 20 players that would be here in 2020 and I think Sandringham had two. “So you can only play who you can play but we’ve put a lot of work into this group and we think potentially they are a very good group. “Five games in the end in NAB League is probably worth 50 to an AFL player so hopefully that gives us some benefit going into the season and we think that experience has been good for the players.”

Of the 30 players selected in this year’s Vic Country Hub, eight hail from the Falcons’ program. But akin to the cases of Metro powerhouses Oakleigh and Sandringham, Geelong will have to maintain a busy schedule for many of its top-end prospects who will juggle commitments between school, NAB League, and representative football programs. Buoyed by the extended talent of the squad past those selected in the Country hub, Turner highlighted the beginning and end of the NAB League season as key periods for draft hopefuls.

“When the hub’s done they can only pick 30 to start and we’ve got eight in which is a lot… I would have thought 15 to 16 that would get in, there’s boys outside the hub that are as good as a lot of the players inside the hub for us,” Turner said. “We’ve got a list of 60 because we have a lot of player movement within the NAB League, a lot of our boys go to Geelong Grammar and Geelong College, and we’ve got other boys at Christian College and St Joey’s which are our big feeder schools that have ACC commitments with football.

“What’s important at our level is in terms of the draft, when NAB clubs are at their full strength at the start of the year, that’s when boys have really got to put their hand up and play well. “It gets diluted a bit during the year, but if you’re picked for the national championships you’ve got to do well and then at the end of the year when the private school football finishes, that’s when you’ve got to be really putting your stamp on it again to give yourself a chance to reach your dream to be drafted or rookied to an AFL club.”

Player movement and continuity have long been priorities in terms of maintenance for talent managers with their top-aged players, and a bunch of 19-year-olds should be able to provide aid advice-wise to those coming into their draft year. In particular, former Sandringham representative Darcy Chirgwin will be at the top of the list having juggled commitments between the Dragons and a Melbourne Grammar scholarship last year, while also recovering from a spate of injuries.

“Darcy was with us as a 16-year-old and got a scholarship to Melbourne Grammar which was good for him school-wise and academically,” Turner said. “I rate Darcy, he’s a really great player. “When he first came to us this year his conditioning and strength were down a bit compared to our other players but our high performance staff have put a lot of work into him. “He’s with Geelong (VFL) so when he’s picked in the VFL, he will play for Geelong and when he’s not picked for VFL he will come back and play for us. “Hopefully we can get that balance right.”

Chirgwin adds to a talented engine room already boasting the likes of Bruhn and Charlie Lazzaro, but it is an unusually tall squad which is set to take the field for Geelong this season. Henry Walsh, Oliver Henry, and Cameron Fleeton, are all key position types who have already impressed, but Turner is still bullish on his midfielders, too.

“When the team’s at full strength, we’ll play them in the their best positions. “Indy Parish for example won’t play midfield in our first round, but he’ll hopefully be in the side and maybe play forward. “When those older players, Lazzaro and (Gennaro) Bove move out of the midfield, he’ll come in and have his midfield role and get that experience. That goes across the board to all of our players.”

Given the wealth of talent available, Turner believes this will be one of the Falcons’ more fruitful years come draft time. But with a long way to go until then, he hopes they can just get a decent run at it.

“We’re just looking forward to the year, we hope we have a bit of luck with injury… so the players can show what they do but we’re pretty excited about the group. “Potentially we think it’s one of the better groups we’ve had, but the word is potentially – it’s still got to happen, they’ve still got to perform.”