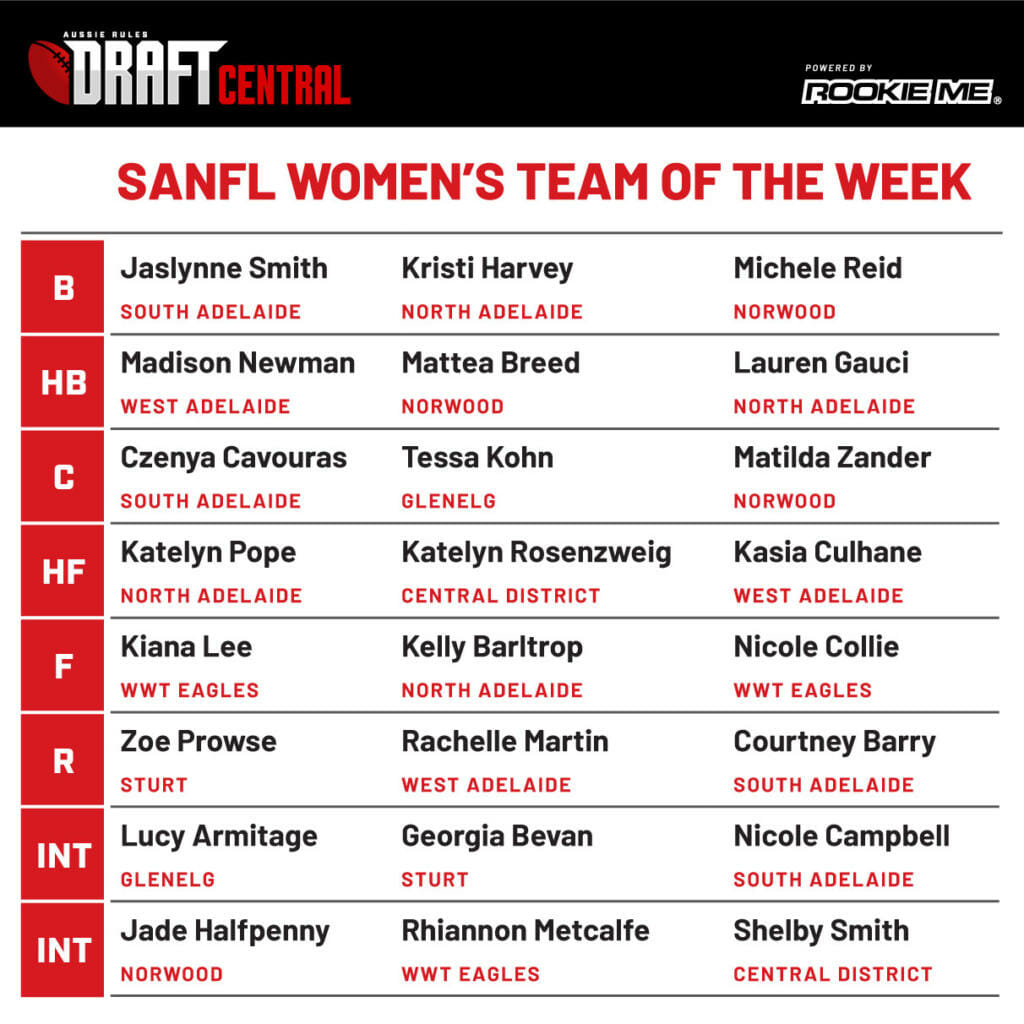 EVERY South Australian National Football League (SANFL) Women’s side has at least two nominees in the Draft Central SANFL Women’s Team of the Week 24-player squad for Round 4, with the top of the table clash between North Adelaide and South Adelaide providing a combined eight. Norwood also had four players after drawing with West Adelaide, the Bloods and other winners, Woodville-West Torrens Eagles had three apiece. Sturt, Glenelg and Central District all had two representatives in this week’s Team of the Week.

The triumphant North Adelaide’s quartet of players begins at full-back where the reliable Kristi Harvey cements her spot for the fourth consecutive round after 15 disposals, eight marks (two contested), six tackles and eight rebounds against the Panthers – and is also named captain of the side. Up the opposite end, match-winner Kelly Barltrop has been named at full-forward following two goals, while Katelyn Pope – the player who delivered the ball to Barltrop for the match-winner – had an impressive all-round game with 17 touches, one mark, four tackles, three clearances, three inside 50s and four rebounds. Lauren Gauci also made the team for the Roosters off half-back following 19 disposals, four tackles, one clearance and three rebounds. The game provided plenty of impressive individual performances, with South Adelaide’s Jaslynne Smith recording 11 disposals, five marks and eight rebounds in the back pocket one of four representatives from the Panthers. Through the midfield, Czenya Cavouras (21 disposals, 12 tackles, seven clearances and five inside 50s) and Courtney Barry (23 disposals, two marks, five tackles, eight clearances and three inside 50) are in the starting group, while Nicole Campbell (23 disposals, two marks, nine tackles, three clearances, five inside 50s and a goal) made it into the team of the bench.

The other team with three representatives is Woodville-West Torrens as three-goal forwards, Kiana Lee and Nicole Collie slot into the respective pockets. Lee also had 11 disposals, four marks (one contested), two tackles and two inside 50s, while Collie made the most of her five disposals, three marks (one contested) and four tackles. Rhiannon Metcalfe also had a standout performance through the ruck for the Eagles, picking up 16 disposals, four tackles, 26 hitouts, four clearances and four inside 50s to make the bench in the side. On the opposition side, Glenelg, Tessa Kohn earned herself another spot in the side following 18 disposals, two marks, five tackles, seven clearances and three inside 50s, while Lucy Armitage made it onto the interchange after 13 disposals, one mark, 10 tackles and seven clearances. The first game of the round between Central District and Sturt saw both teams fill out eight representatives, as Zoe Prowse earned the honour of starting ruck – and the vice-captain honour – after a phenomenal 23 disposals, four marks, three tackles, 20 hitouts, 10 clearances, two inside 50s and two rebounds in the win over the Bulldogs. Joining her in the side is teammate, Georgia Bevan (14 disposals, two marks, three tackles, four clearances, two rebounds and a goal), as Central’s two representatives were key forward, Katelyn Rosenzweig (13 disposals, four marks – three contested – four tackles, two inside 50s and two goals) and midfielder Shelby Smith (15 disposals, one mark, 10 tackles, three clearances and four inside 50s).

There were a number of unlucky players to miss out on the 24-player side this week with South Adelaide’s Indy Tahau, North Adelaide’s Lauren Daniel and Woodville-West Torrens’ Chloe Forby named the three emergencies. Tahau was particularly unlucky in a round where so many rucks made their presence felt. Norwood’s Leah Cutting and Glenelg’s Soriah Moon were another couple of players to miss out despite big games in the ruck, while Central duo, Lauren Breguet and Lauren Smith, and Sturt’s Jo-Anna Baltais were also players who came into consideration for spots in the side.

DRAFT CENTRAL’S SANFL WOMEN’S TEAM OF THE WEEK: ROUND 4