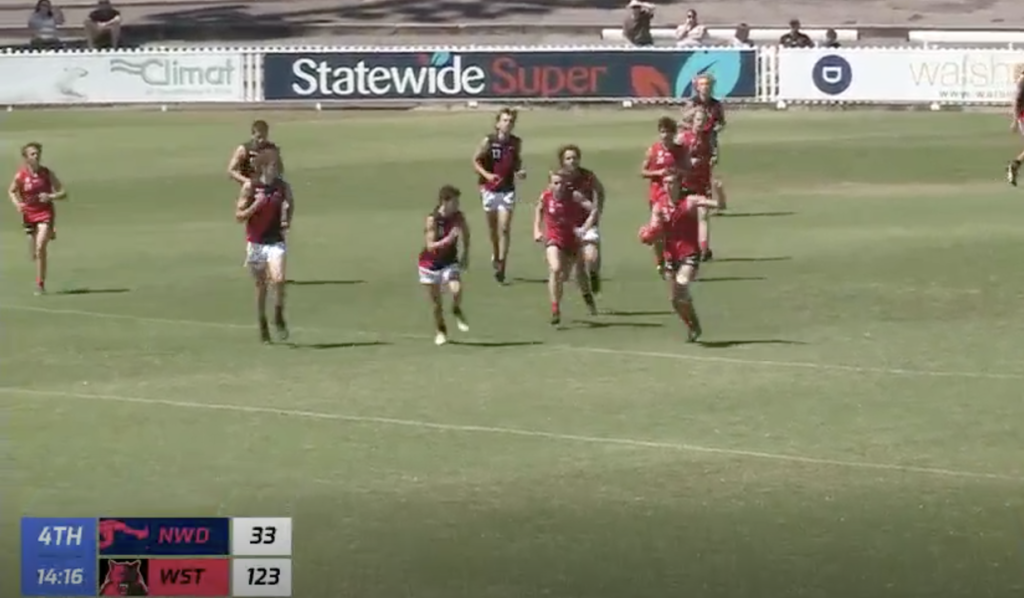 AS chaos spreads across the sporting world, Round 2 of the SANFL Torrens University Under-16 competition proceeded with caution on Sunday. North Adelaide, Sturt and Glenelg each recorded their second triumphs of the season and West Adelaide kick-started their campaign with a big win over Norwood. Meanwhile, the Bulldogs, Eagles and Panthers remain winless after the opening fortnight of action.

After booting six straight in the opening term, the Roosters never relinquished the lead to record an 18-point win over South Adelaide at Flinders University Stadium. North Adelaide dominated the majority of the critical statistical categories, led by talented on-baller Max Blacker. Following on from a strong opening round, Blacker collected 31 disposals, laid 11 tackles, took seven marks and booted two majors in a complete, best-on-ground performance. He was aided by the prolific ball-winning of William Dowling, who finished the game with 28 disposals, six marks, three tackles, four clearances and two goals to sit second in the league for total disposals. The productive duo were the only players on the ground to record in-excess of 20 touches, whilst Kane Mcauliffe and Tyler Sparkhall were also multiple goalkickers for the red and white, booting two each. Tall-forward Isaac Keeler presented well, taking nine marks to go with 16 disposals and four inside-50s. For the Panthers, who were without talented midfielder Jaiden Magor, Will Verrall was impressive in the ruck. Whilst he recorded 23 hitouts, the athletic Verrall also collected an equal team-high 19 disposals, five tackles, five inside-50s and a goal to be amongst his sides best performers. Jayden Christophers racked up 19 disposals and Jamison Snelling was the Panthers’ sole multiple goalkicker, booting two.

Sturt recorded its second away-from-home victory in as many weeks by knocking off Central Districts on Sunday morning. Austin McDonald (Central Districts) and Oliver Britton-Jones (Sturt) dominated the scoring, booting four and five goals respectively. Britton-Jones managed three behinds in the win over the Eagles, but dramatically improved his accuracy to lead the Double Blues to victory. He also tallied 13 disposals and seven marks. After booting two goals last week, Cormac Dwyer added a further three to his season tally, along with nine marks and four inside-50s. Nick Sadler moved to the top of the clearance leaderboard after recording 12, to go with 24 disposals, six tackles and six inside-50s. Following on from a tremendous 33-disposal effort in Round 1, Bulldog McDonald recorded a team-high 21 touches against Sturt, but it was his impact on the scoreboard which proved most effective. Alongside the imposing overall numbers he is assembling, McDonald’s 74 per cent disposal efficiency on the season also stands out. Elsewhere for the Bulldogs, Brodie Tuck recorded nine hit-outs, nine marks and four tackles, Adam Deakin collected five rebound-50s from defence, Tyson Linke snared two goals and Declan Whelan assembled 20 touches and nine marks.

A brilliant eight-goal third term saw West Adelaide hammer the Redlegs at The Parade. Ball-magnet Kobe Ryan once again appeared to bring his own football, collecting 33 disposals, four marks, three tackles, eight clearances and eight inside-50s for the Bloods. The on-baller sits seven touches clear at the pinnacle of the disposals leaderboard after two weekends of action. Four goals from Charbel Oueiss, three each from Max Downs, Joshua Fedele and Ashley Wilson, and a couple from Tyson Coe lifted Westies to a final score of 126. Their 19 goals to 12 behinds painted a much prettier picture than their inaccurate seven goals and 15 behinds against the Roosters. Jameson Whitbourne’s eight tackles and Harry Barnett’s 32 hitouts also stood out on a tremendous morning for the visitors. Riley Verrall was again impressive for Norwood, gathering 24 disposals, seven marks, six tackles, five clearances and five inside-50s. Taj Rahui laid an impressive seven tackles and Alexander van Wyk was his side’s only multiple goalkicker, kicking a pair. It certainly appears as if the Bloods will contend for the Under 16 crown once again.

Glenelg stormed out of the blocks on Sunday evening to record its second win of the campaign. Incredibly, having held Central Districts goalless in the first half last weekend, the Bays’ sensational defence again managed to hold the Eagles to just two behinds at the main break. Charlie Hildyard earned best-on-ground honours, amassing 29 disposals, eight marks, four tackles, four inside-50s and two goals to lead the league in Dream Team Points (258) after two weeks. Jake Walker sent it inside-50 on 11 occasions, proving integral in his side’s high scoring. He also managed six tackles and 29 disposals. Archie Lovelock was not quite as prolific as last weekend but was as hard-working as ever, laying seven tackles. Brodie Pratter stole the show up forward, booting four majors. For the Eagles, Adam D’Aloia worked tirelessly once again, racking up 24 disposals, nine tackles and four clearances. Midfield partner Mattaes Phillipou was the game’s most prolific ball winner, notching up 30 touches. His work around the stoppages was also strong, finishing with six clearances. James Ellis (two goals), Samuel Harnas and tall Sebastian Menta were the only Eagles to hit the scoreboard.

Note: Whilst SANFL officials have suspended the League, Reserves and Under 18 competitions until further notice, an update on the immediate future of the Under 16 competition is expected to be announced in the coming days.