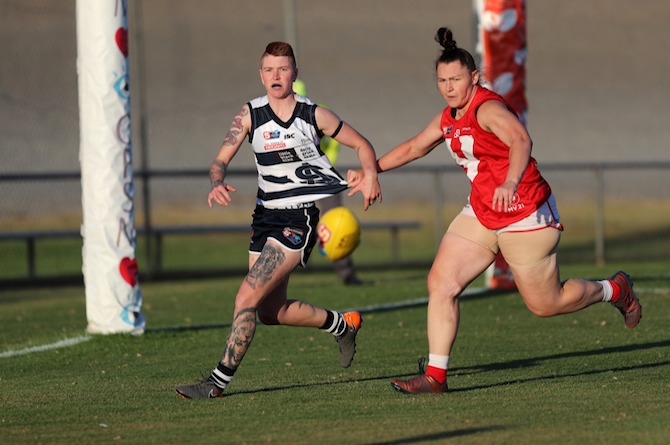 IT has been a long time coming, but it was finally celebration time for Woodville-West Torrens Eagles who celebrated their first win in the club’s history, 14 games into its inauguration. So many times the Eagles have come close, but they got the job done with an impressive second half to down Glenelg by 25 points. In other results, North Adelaide went outright top with a four-point win over South Adelaide, Sturt made it back-to-back wins with victory over Central District, and West Adelaide and Norwood played out the season’s first draw.

After so many close games and near misses, there was finally cause for celebration at Woodville-West Torrens after the Eagles produced a second half to remember and run out 25-point winners over Glenelg on Friday night. The Eagles trailed by as much as 13 points five minutes into the second term, but then took total control of the match to boot the final 6.2 of the game and enjoy a comfortable maiden victory in the SANFL Women’s.

The Tigers were missing a number of starters from the game due to Adelaide Crows’ selection and injury or unavailability, but still looked good early in the match, booting two first quarter goals – Molly Althouse and Lauren Kenny – to counter the Kiana Lee major early in the term. When Melinda Speechley converted the Tigers’ third just 39 seconds into the second term and a behind to Althouse shortly followed, the visitors were up by 13 points. Little did they know that a wave of Eagles goals would follow. Rhiannon Metcalfe added a behind in the sixth minute – the first Eagles’ score since Lee’s major seven minutes into the first term – and then Lee had her second not long after to cut the half-time deficit to just six points. Two minutes into the second half and Stephanie Walker had levelled the scores and 10 minutes later, Lee’s third snag had the winless side a goal up at the break. Still only narrowly ahead, the fans were still nervous. Enter Nicole Collie who took the game by the scruff of the neck and booted three consecutive goals every five minutes in the last quarter to help her side to a 7.3 (45) to 3.2 (20) win.

Not known as a high possession side, the Eagles had 30 less touches and seven less marks, but their reputation as the number one tackling side continued with another remarkable effort of 92 tackles to 74. Woodville-West Torrens also dominated the hitouts 43-28, though the Tigers made more opportunities with clearances (30-24) and had an extra inside 50 (21-20). It was once again the Eagles’ defence that held up in the tough times, recording 16 rebounds to 14, but more importantly, finding a way to score from limited opportunities in what was really a battle between the arcs.

Metcalfe had a team-high 15 disposals, 26 hitouts, four clearances and four inside 50s in the win, a huge reason for her side’s ruck work dominance. Up forward, it was Lee (12 disposals, five marks – one contested, three tackles, two inside 50s and three goals) that did the damage early, while Collie made the most of just five disposals to take four marks – one contested – and boot three majors. Also among the best were Chloe Forby (11 disposals, seven tackles, five clearances and five inside 50s) and Walker (11 disposals, three tackles). For the Tigers, Tessa Kohn continued her brilliant form with 18 disposals, seven clearances, five tackles, three inside 50s, two marks and two rebounds in the loss, teaming well with Lucy Armitage (13 disposals, seven clearances, and 10 tackles) through midfield. Tasja Batzavalis made a welcome return with three inside 50s to go with 12 touches, four marks – two contested – and three tackles, while Tess Morcom tried hard in defence with a team-high three rebounds to go with nine touches and five tackles. Soriah Moon had great experience against Metcalfe, still managing 17 hitouts as well as five clearances to accompany seven disposals.

Sturt has won back-to-back matches to move into fourth spot on the SANFL Women’s ladder, downing Central District by 11 points. The result handed the Bulldogs their third consecutive loss, and with the Eagles’ win, fell back to last spot on the table. The Double Blues booted three first half goals to lead throughout the contest, and despite Central drying up the scoring in the second half, could not make up the difference as they fell short of a second victory this season, losing 4.2 (26) to 2.3 (15).

Sturt had the perfect start to the match with Louise Firth converting a major for the visitors just 44 seconds into the match, and then Georgia Swan made it two midway through the quarter to help her side to a 13-point lead at the break, keeping the opposition scoreless to quarter time. Georgia Madigan got the Bulldogs on the board in the opening 30 seconds of the second term, albeit with a behind, before Georgia Bevan converted a third major for the Double Blues in the seventh minute for Sturt to stretch the lead out to a straight three goals. Katelyn Rosenzweig continued her good work in front of goal to use her strength and goal sense to kick one as the term was winding down, and by the main break, Central District trailed by 11 points. The scoring dried up in the second half, but Zoe Prowse made it count in the dying moments of the third quarter with her first of the contest, as the teenager was best on ground in the win. Rosenzweig continued to press hard and booted her second major midway through the final term, but ultimately her efforts would not be enough as the home team fell short.

Central had a different approach to its last couple of weeks, winning the disposal count for the first time this season, whilst also laying 29 more tackles than their opponents. Sturt led the marks (31-20) and dominated the hitouts (32-11) helping its strong midfield to get on top in the clearances (29-23). Central managed to keep the ball out of its defensive 50 a fair bit by winning the inside 50s, 23-16, but the Double Blues’ defence was up to the task with 20 rebounds to 11 in the match.

West Adelaide has maintained third sport on the SANFL Women’s table, while Norwood keeps its premiership hopes alive after the pair drew in an exciting Saturday evening contest. In a low-scoring affair, the Bloods looked to have the Redlegs covered at the final break, but a 2.3 to 0.0 final quarter resulted in the visitors drawing level by the final siren.

Neither team could register a goal in the opening term, with West Adelaide scoring a couple of behinds through Melanie Elsegood and Helen Maidment. Norwood then had its chances go begging on the other side of quarter time with back-to-back behinds, before the Bloods made the most of their chances midway through the term. Kasia Culhane had an impact coming back into the team with a good goal, followed by Elsegood making good on a chance five minutes later. Mattea Breed missed a chance early in the term but then saluted near half-time to bring the deficit back to seven points. Elsegood added more pressure to the Redlegs in the third term with an early goal with a couple of behinds either side of the major at opposite ends of the quarter going begging. The main positive for the Bloods was the fact Norwood had not scored since Breed’s late goal in the second term. That would change in the final term as Norwood charged home from a 15-point deficit, as Ashlee Gould and Shai Hiscock converted chances with the latter’s coming with just a few minutes on the clock to level the scores and moments after a flying snap from Breed that bent a little too much. Despite both team’s efforts in the final few minutes – West Adelaide doing the bulk of the attacking – neither could find a winning score and the match fittingly finished as a draw.

Statistically the sides were evenly matched across the board with the Bloods having just six more disposals and two more marks, though Norwood controlled the centre square with 10 more hitouts (22-12) and three more clearances (17-14), while West Adelaide had a lot more chances inside 50 (30-20). The Redlegs defence stepped up however, rebounding 27 times to the Bloods’ 16, while West Adelaide’s tackling pressure was a feature of its game with 65 tackles to 51.

North Adelaide has remained as the sole undefeated side in the SANFL Women’s competition after a late goal to Kelly Barltrop sealed a four-point win over reigning premiers, South Adelaide. In a grand final rematch, last year’s leading goalkicker might have been the hero, but after a slow start and conceding the first three goals of the match, the Roosters kept the Panthers to just two behinds for the rest of the contest as they booted 4.1 themselves during the 4.1 (25) to 3.3 (21) victory.

Early on it was seemingly like it could be a one-sided contest as Nicole Campbell booted a goal midway through the term, and by quarter time, consistent goalkicker and last week’s dominant scorer, Jess Kirk had 2.1 to her name with goals in the ninth and 14th minutes of the quarter. Without a score on the board and trailing by 19 points at the break, North Adelaide fans wanted a response from their faithful – watching from home of course – and it was Cristie Castle who gave it to them with an early goal to break the deadlock. Barltrop soon chipped in with her first goal since Round 1, while Rising Star talent, Hannah Ewings joined the party for the Roosters to be back within a point by the main break having kicked three goals in six minutes. Neither team could elicit a major in the third term, with young gun, Teah Charlton missing a chance at the sixth minute mark of the third quarter, and the next score came a good 20 minutes later when Ashleigh Woodland also added a behind to her name. When Courtney Barry scored a behind for the Panthers at the 14-minute mark of the final term, they held a two-point lead meaning the Roosters would need a major to win. In a remarkable play for a side that had not scored a goal since midway through the second term, the team went end-to-end and while each of the players managed to hit targets, it was Katelyn Pope‘s daring move to take on an opponent, get the extra five metres and deliver the ball quickly enough into Barltrop to not have a third player come over and spoil. Last year’s leading goalkicker turned around and kicked towards goal seemingly between having a shot and passing to a one-on-one and whilst a hand flew up and Panthers defenders appealed for a touched ball, the goal was given the all-clear and the Roosters held on for a remarkable win.

Both these teams love to use the ball and they clocked over 200 disposals each, though the Roosters had 40 marks to 26, while the Panthers still applied plenty of tackling pressure (78-64). South Adelaide won the clearances (28-21) and dominated the inside 50s (31-16) despite losing the hitouts (29-25). Credit must be given to North Adelaide’s defence that held up well with 26 rebounds to 13, surviving the wave of Panther attacks.

South Adelaide had a number of prominent ball winners as Barry led the midfield with 23 disposals, two marks, five tackles, eight clearances and three inside 50s, alongside Czenya Cavouras (21 disposals, 12 tackles, seven clearances and five inside 50s). Campbell was also a prominent ball winner in there with 23 disposals, two marks, nine tackles, three clearances and five inside 50s, as Indy Tahau laid double-figure tackles too with 10, to go with 17 hitouts, 16 disposals and two inside 50s. Jaslynne Smith was the standout defender for the Panthers, having a remarkable eight of her team’s 13 rebounds as well as 11 touches and five marks. Kirk again made the most of her chances with 2.1 from just four disposals, but she laid five tackles too.