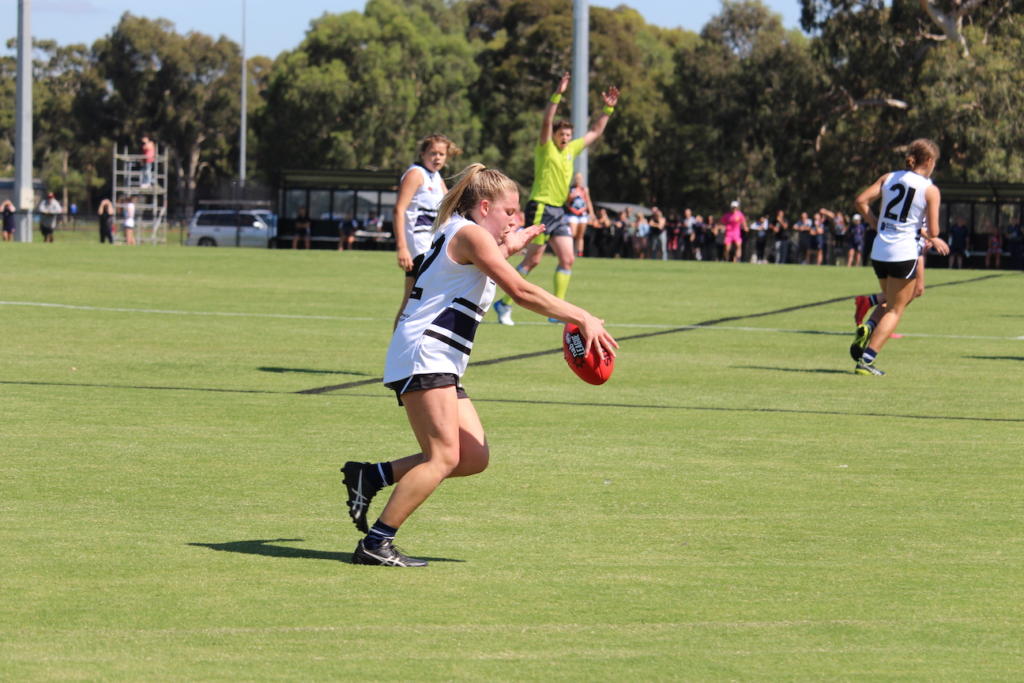 NORTHERN Knights have stretched their winning streak to three in 2020 after overcoming a plucky Dandenong Stingrays outfit, running out 23-point victors, 8.8 (56) to 5.3 (33). In a testament to their development and high defensive intensity the Stingrays managed to keep the Knights goalless in the opening term, a feat that not many would have expected given the array of talent across the field. But with the game on the line and Knights ruck Georgia Kitchell being stretchered off the field with a suspected concussion in the third the Knights kicked it up a gear, finding a spark inside 50 and kicking six unanswered goals to be runaway winners.

Dandenong kicked the first goal of the match with Tyanna Smith releasing Amie Carroll out the back of a pack just outside the goal square nailing a regulation goal. Minutes later Emily Shepherd kicked the Stingrays second goal in quick succession after being rewarded a holding the ball free kick to give them the early ascendancy. The Knights had two chances late in the quarter to reduce the margin, although were unable to convert with both Maykaylah Appleby and Jade Ventura‘s shots going astray leaving the side goalless in the first term something they would not be used to. Northern’s Ellie McKenzie dominated through the midfield with her brutal attack at the footy although her kicking efficiency was lower then normal credit to the heightened pressure of Dandenong.

The game started to break open in the second term with players lifting their intensity and asserting themselves on the contest. Smith was electric, with her agility on show in the second term. While McKenzie continued to shine in the midfield, assuming her role as a clearance bull. Jess Fitzgerald also started to have a presence for the Knights with her pin-point kicking on full display finding teammates in space. Both teams kicked two goals apiece in the second quarter, with Carroll’s second for the Stingrays the pick of the bunch. Ruck, Phoebe Canning managed to get the ball to Carroll with some great follow up efforts, followed by a solid set shot from the boundary, 40 metres out.

The third quarter started with Dandenong’s Abbey Jordan kicking truly from the goal line after a 50-metre penalty extending their lead to a game high 13 points. Moments later, Knights’ Kitchell was taken high and had to be taken off the ground on a stretcher, halting the game for over ten minutes. This lit a spark in the Knights who would proceed to kick six goals. Appleby effectively took Kitchell’s high free kick, as she kicked the ball passed a pack of players into the arms of proven goal kicker Alyssa Bannan who hammered home the goal. The Knights controlled the momentum for the rest of the quarter with Fitzgerald kicking two goals including a great snap from the pocket and Trinity Mills additionally getting on the scoreboard. A highlight for the Stingrays in the third quarter was midfielder Amber Clarke completing a Marlion Pickett-esque turn in an attempt to evade opponents with just over a minute left.

Appleby brilliantly set up McKenzie for the only goal of the last quarter and the Knights sixth in a row to all but put a nail in the Stingrays’ coffin. Northern peppered the ball inside 50 throughout the final term applying a mountain load of pressure to try and trap the ball in their attacking half. Bannan was busy throughout the term contesting the ball in the air and bombing it deep to create scoring opportunities. Canning dominated the ruck with her opponent off the ground, while Smith continued her hot form although they could not replicate their proficiency on the scoreboard.

Smith was arguably the best player for Dandenong with 21 disposals, while ruck Canning was also serviceable through the middle of the ground. Tall forward, Carroll was able to convert her chances, although she was not able to get the ball enough. While Clarke provided a spark up forward for the Stingrays with her speed worrying Knights defenders. Jordan and Mackenzie Eardley also stood up for the Stingrays across half back. Tarrah Delgado and Megan Barnes (16 disposals) were at their intercepting best in defence while Barnes, was not afraid to take the game on at half back. McKenzie (one goal, 28 disposals) and Jess Fitzgerald (two goals, 28 disposals) were superb for the Knights through the midfield combining seamlessly to dice up the opposition. Abigail Bennett was very quick through half forward, while  Bannan (two goals, 18 disposals) and Mills provided good targets up forward for the Knights.

Next week the Northern Knights will face the Eastern Ranges at RMIT University, Saturday at 11am, while Dandenong will travel to Mars Stadium to face the GWV Rebels next Saturday at 10:45am.