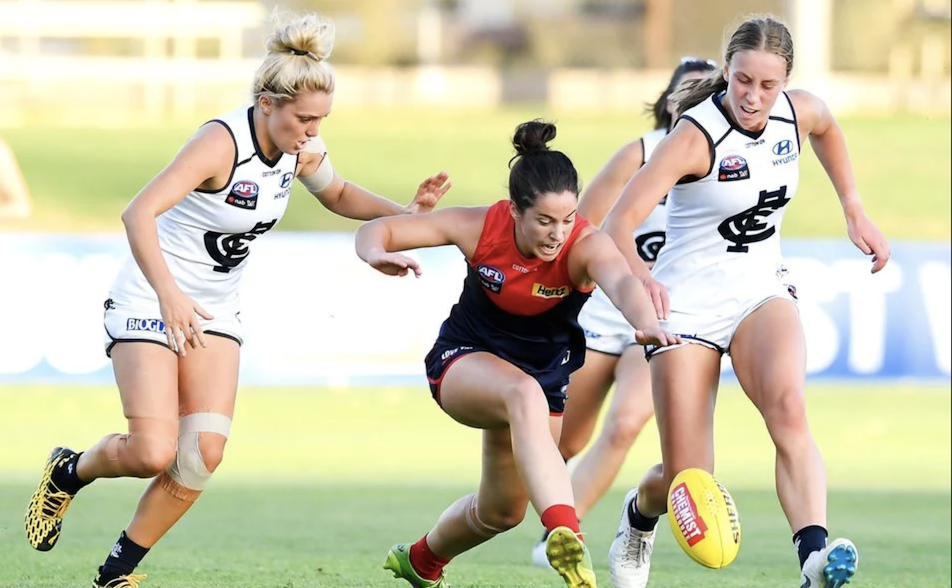 IT was a hot start in hot conditions in Alice Springs on Saturday night, with Conference B rivals Melbourne and Carlton fighting for an elusive finals opportunity with the loser of this match in danger of missing out. While the Demons took out an early lead, the Blues were not to be left behind, keeping a firm hand on the Dees to dominate the second half, denying a goal from the red and blue after half-time, with the hosts going down 3.6 (24) to 6.4 (40).

Both sides switched on early, and while both sides were unable to put a goal on the board for the first half of the quarter there was no lack of pressure across the field with quick movement and little clean chances to put ball to boot. The Dees were more patient with ball in hand, chipping the footy around the ground but wasting chances up forward. Kerryn Harrington was on song early, applying defensive pressure with her read of the play and intensity proving key for the Blues, aided by Vaomua Laloifi who was unafraid going into any contest. Melbourne were quick to take advantage of the Blues playing down, locking up their back 50 thanks to rebounding efforts of Libby Birch and speed of Daisy Pearce and keeping the Blues tracking through the middle of the ground. A head knock to Aliesha Newman had fans scrambling but Kate Hore was quick to create some cheer, sprinting down the wing with three bounces and finding the first goal of the match at the end of it. But Carlton returned fire almost instantly, with Brooke Walker on the end of a Tayla Harris kick at centre bounce to keep the side in the mix. Harrington missed much of the first after a head knock saw her take the bench with a cheekbone issue, with Nat Plane lining up in her place against a real mismatch in opposition against Sarah Perkins. It saw Perkins do what she does best inside 50, booting a goal and getting the Dees up and about and in control once more, owning the footy on the outside to lead by eight and dominating the mark count 22-9 at quarter time.

A slow second term followed up the first, with both sides continuing in similar fashion. While Harrington rejoined the fray, Melbourne’s Irish recruit Sinead Goldrick went down with a corky, leaving the Dees down one in the back half for the rest of the match. Quick hands from Harris saw Georgia Gee put her first on the board as the Blues switched on the pressure, but while they flooded Melbourne’s forward 50 they were unable to take advantage of turnover footy with little option left in their forward half to make the most of opportunities. A late goal from Shelley Scott saw the Dees reestablish an eight-point lead heading into the main change, with a massive second half to come.

The match flipped in the second half, with the Blues doing what the Dees did best early, cleanly and patiently chipping the footy down the field to apply the forward pressure they so sorely lacked early. It was a tense start, with both sides going in hard to the contest but it was the Blues ultimately getting the better of the Dees, coming out full throttle to prove they had plenty left in the tank. Melbourne lost some cleanliness in defence but were lucky to get out relatively unscathed in the early stages of the term, pressured in their back 50 in a way they had not been early in the match. But while the Blues had difficulty applying the scoreboard pressure, all was released with a likely anterior cruciate ligament (ACL) injury to Sarah Lampard, with a much-needed goal from Harris breaking the flood and youngster Grace Egan following up minutes later to put the Blues in front for the first time. The Dees just could not catch a break, down two on the bench and the bounce just not going their way in front of the big sticks, with Newman just one of many who could not apply the scoreboard pressure, with a scarily similar run and bounce down the wing to Hore’s first quarter major dribbling through as a behind. A late knock to Harrington saw the key defender head off the field for the second time, with the Demons finishing the third term with a lacklustre two behinds to Carlton’s two majors.

Both sides started the final term ready for a tough slog, with neither side ready to give up in what shaped up to be an even contest. Carlton’s intensity was paying dividends with Melbourne’s defence tiring thanks to little bench rotations in the heat, with a goal to Maddy Prespakis opening up a crucial nine point lead and all the momentum going the way of the Blues. Plenty of opportunities saw the Dees pepper the scoreboard but to no avail, with the footy continuing to evade the goalposts and the clock ticking down. The last five minutes saw frantic footy, with much of the play in the Melbourne forward 50 but impatience causing more issues from the usually composed side. A second goal to Walker saw the Blues lock up victory with only three minutes left on the clock, extending the lead to 16 points and giving the Dees little chance of taking back the win.

Despite not getting hands to the footy in the first half, Carlton young gun Lucy McEvoy finished among the best with 19 touches, joined by Prespakis who once again starred with 23 disposals, four marks and a goal. Laloifi and Plane provided a crucial defensive buffer down back while Harris and Darcy Vescio put on a veteran performance getting hands to plenty of the footy and creating a constant pressure pushing up the ground. For Melbourne, Paxman lead the charge once more with 27 touches while Hore put on a stellar performance with 19 touches, six marks, six tackles and a goal in her best match of the season so far. Pearce put her experience out on the field, collecting 16 touches and five marks while Maddi Gay racked up 17 touches and five tackles, aided by Eden Zanker who impressed in the ruck with 17 hitouts and 13 touches, while Birch was influential in defence.

Both Melbourne and Carlton will face Fremantle in the coming weeks, with this win leaving the Blues in a good position to get through a rough patch if it comes. Melbourne will have a tough time coming back from this match, with the margin seeing their percentage drop drastically and Collingwood right on their tail with only two rounds left in the books. Carlton take on Conference B cellar dwellers, West Coast Eagles next Saturday at Ikon Park while Melbourne travel to Western Australia to take on undefeated Fremantle on Sunday afternoon at Fremantle Oval.