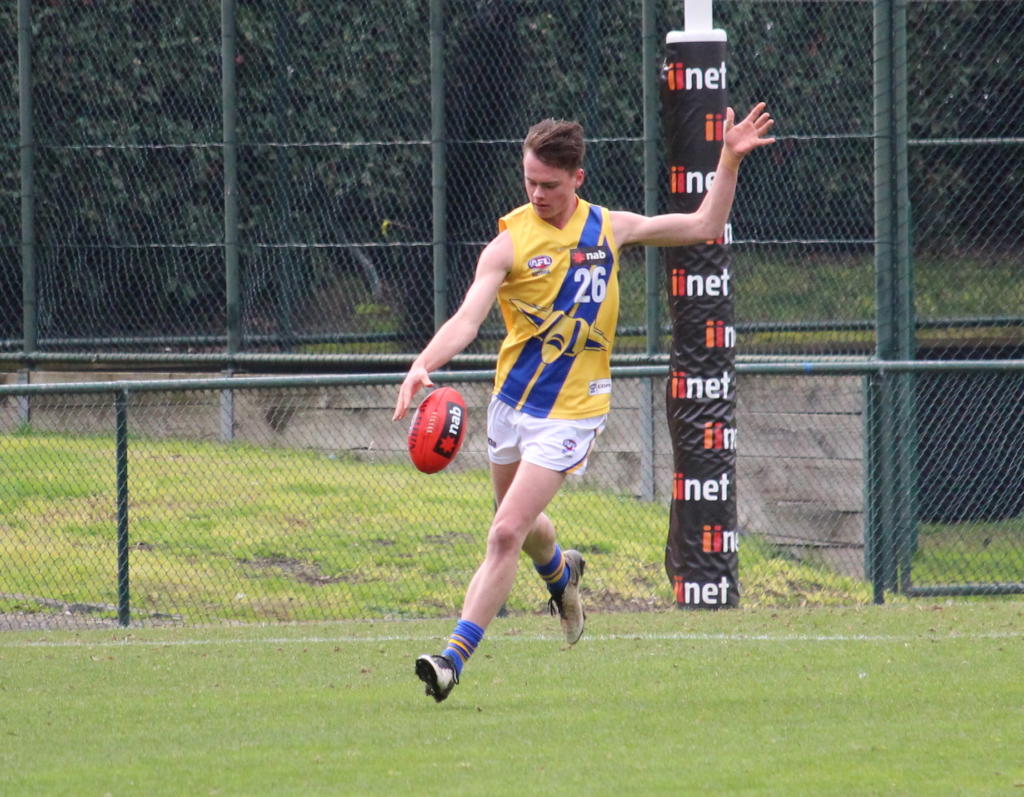 WESTERN Jets enjoyed a strong 2019 on and off the field and are excited about the future with plenty of promising signs over the pre-season. While the Jets had just the two players drafted into the AFL in 2019, Talent Manager Luke Williams others have already made an impact at a state league level.

“We performed quite well on the field which was good for the club, winning the Wildcard game and then the final and on top of the two rookie selections in Emerson Jeka and Josh Honey, we had a Morrish Medalist in Lucas Rocci who’s now well embedded in a VFL program at Werribee, and Daly Andrews is playing some good preseason footy at Williamstown,” he said. “So we’re quite proud of last season performances and not only having some players on AFL lists, but also supporting the VFL programs as well.”

Williams said while making the finals was a great effort from the club, the greater focus was players walking away as better footballers and more importantly, better people.

“Yeah I think defining our measurement for success in these programs is really difficult but ultimately we exist to develop our players as footballers and people and hope that whatever their next stage of football is, they can be leaders and use those experiences to pass onto their teammates at their next stage of footy, whether that be AFL, VFL or even community,” he said.

With the NAB League Boys competition starting in just over a week, the Jets have made changes off the field with a new high performance manager and a lifted intensity on the track. While the team is still trying to gel on the field, they are building and Williams noticed a marked improvement from game one to game two of their practice matches.

“The players have worked really hard, they’ve got a lot out of themselves. we’ve had a new high performance manager come in over the summer in Tim Walsh and brought in some new ideas and the players are really engaged with that so that’s terrific,” he said. “We’re still finding out feet on the field. “Practice games we were better last week but the week before against Geelong we struggled a little bit. “But I think the players are starting to gel together and the more times they play together, the better outcomes on field we’ll have.”

Last year the Jets had an abundance of talls, but with the new season comes new opportunities. Williams said the side was smaller this year, but there were still a number of young talents who were raw but looking for opportunities at different points throughout the season.

“We’re probably not blessed with the talls we had last year,” he said. “It’s unusual how it comes in waves from year to year. “We’ll blood a few of those younger talls this year for sure and give some opportunities that didn’t get a look at it last year. “From a strength point of view I think we’re pretty even across the board. “We’ve got a lot of runners through the midfield so our gamestyle will have to change a little bit from last year. “We’ll have a look at a bit more run and carry as opposed to kicking it to those taller targets.”

One of the more experienced talls is key defender Cody Raak, with the Vic Metro hub member having a “seamless” pre-season. For the Jets’ other hub member, Eddie Ford, it has no been as seamless, with a few injuries over the summer but is on track to still have an impact early in the season.

“I think both Eddie and Cody possess qualities that clearly make them capable players at Victorian Metro level. They’re well and truly deserved of being in those programs,” Williams said. “They’re both driven individuals who are keen to get the best out of themselves so they’re tracking well. “Obviously Eddie hyperextended his knee last week and he’s had a few ankle injuries over the summer which has affected his preseason but he’s a natural footballer and I’m sure he will adapt to the games once they start. Cody’s pre-season has been seamless really. “He’s improved some of his athletic components that he has to improve and he’s a natural footballer as well so once the games start you’ll see the best of him.”

In terms of positioning, Ford’s goal will be to move from being a high-flying forward into a consistent midfielder, something Williams said injury-permitting will happen. It might be a few rounds before he works his way into the onball group, coming back from injury. However Raak will be placed in his familiar key post in the back 50, but has the capability of going forward and taking some strong marks down there.

“It’s a goal of Eddie’s to go through the midfield,” Williams said. “We intend to support him with that. “He’s had an interrupted pre-season as I mentioned so we’re going to have to build into that midfield time. “He will start off in the forward line but eventually will see some midfield time. “Cody while being very comfortable and valuable to us down back, he does have the ability to play forward, he has in the past, and he might get some time forward, but ultimately he will hold down that key position defender role for us to think.”

A few familiar names from last season including Vic Metro representative, Darcy Cassar and competition leading goalkicker, Archi Manton were among the players able to play a few games in the NAB League while splitting time with their respective VFL teams.

“It’s an interesting phase with the 19-year-olds,” Williams said. “There’s a lot more scope for VFL 19-year-old players to spend some time with the Jets. “We have an alignment with Williamstown but also Footscray VFL so we’ll see a boy by the name of Charlie Langford play some games with us who was with Sandringham last year and Melbourne Grammar. “Possibly even Darcy Cassar who has recently begun training with Footscray, maybe early in the season he will play a couple of games for us as he settles into his VFL home. “Archi Manton’s another one who’s predominantly going to be at the Northern Blues but might spend some game time with us as well.”

While missing out on the draft was a setback for the talented Cassar, Williams said the versatile speedster was not going to be lost to football, nor give up on his dream. The Jets’ Talent Manager praised Cassar’s resilience and hoped an opportunity would arise for the overager in the future.

“In respect to how he’s taken it, Darcy’s an incredibly resilient individual and what I love about him and the family is they love footy,” Williams said. ‘He loves playing the game and at the end of the day whether or not he achieves his goal of getting on an AFL list or not, he’ll give his best at whatever level he plays because he purely loves football for the game. “That attitude drives his resilience. He’ll keep ticking along. “He’s obviously incredibly talented, got great speed, he’s been in our program for quite a few years now and been quite exceptional, it’s just a case of if the opportunity presents itself, but he will keep battling on.”

The Jets open their season on Sunday, March 22 at Mars Stadium in Ballarat when they take on the Cannons from 10am. Williams said the staff and players could not wait to run out and get stuck into the season ahead.

“We’re just looking forward to playing games,” he said. “Preseason at any footy club’s a long time and guys just want to get out there and play and we can’t wait to get the season started. “Let the games begin!”