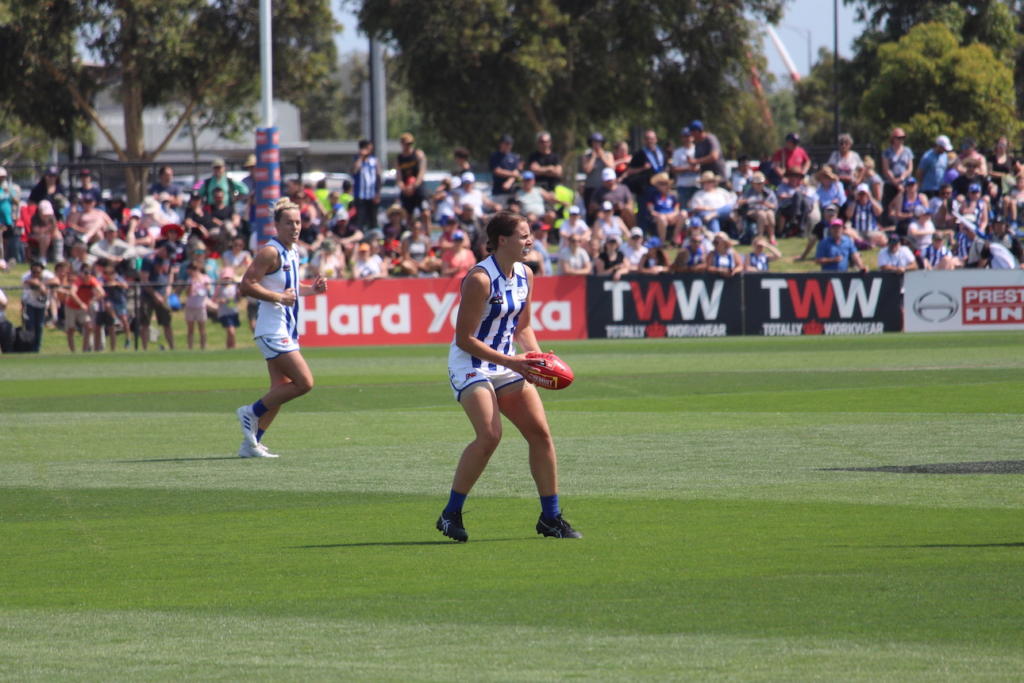 TOP sides in their respective conferences, North Melbourne and Fremantle have proven to be a real threat to be reckoned with in 2020 with each side possessing a couple of defining stats. We take a look at what sets them apart from one another while also highlighting their similarities despite sitting on opposite sides of the conference system.

The North Melbourne Kangaroos now stand two points clear atop Conference A in the AFL Women’s after a seven-goal thumping of the Adelaide Crows in Hobart. The only blemish on their record came from a two-point loss to Melbourne in Round 1 and since then, no team has come closer than 13 points. With the most prolific offence in the league, 11 separate goal scorers, the Kangaroos have scored 243 points throughout the season at just under 50 points per game. Kaitlyn Ashmore leads the way with eight goals, with Daisy Bateman and Jasmine Garner contributing with a goal a game so far in 2020. Strong at both ends of the ground, North Melbourne boast the second-best defence in the league, having conceded more than three goals on just one occasion this season. Where coach Scott Gowans will look to improve, however, would be the ruck contests. North Melbourne have 42 less hit outs than their opposition, yet still have 32 more clearances. Quite the paradox that Gowans will not consider an emergency as their major ball winners in Garner, Ash Riddell and Emma Kearney are still averaging over 20 disposals per game despite the lack of aerial service.

On top of Conference B sit the undefeated Fremantle Dockers following their three-goal victory against the Brisbane Lions on Sunday evening. Though the losses column is empty, the Dockers have had some close calls with a three-point victory over Collingwood and a one-point victory over St. Kilda threatening to ruin their record. Only the Kangaroos have scored more than the Dockers this season, which has seen Fremantle boast 10 different goal-scorers. Sabreena Duffy has scored the most with nine, highlighting just how key she is to the side. Fremantle’s aggression at the contest has seen them lay 100 more tackles than their opposition throughout the season, where Kiara Bowers incredibly averages more than 14 tackles per game. Bowers also leads the way for disposals at 16 per game with Hayley Miller, Philipa Seth and Gemma Houghton all average more than 11 disposals per game.

Though their points for and against are similar and their ladder positions are equal in their respective conferences, the Dockers have been far less convincing than the Kangaroos despite their perfect record. Fremantle record an average of 33 less disposals than their opponents in wins, where North Melbourne records 47 more disposals. With more disposals, it is inevitable that more shots on goal are had which leads to higher scores, which teams would hope leads to larger winning margins. North Melbourne’s average winning margin is almost double what Fremantle’s is, so with finals footy in sight, Fremantle coach Trent Cooper will be looking to rectify his team’s defence. Unfortunately, the two teams will not meet during the home and away season, but a sole match up during the finals would make it even more interesting.